Dienhart: Huskers have one of 'best-looking' fronts 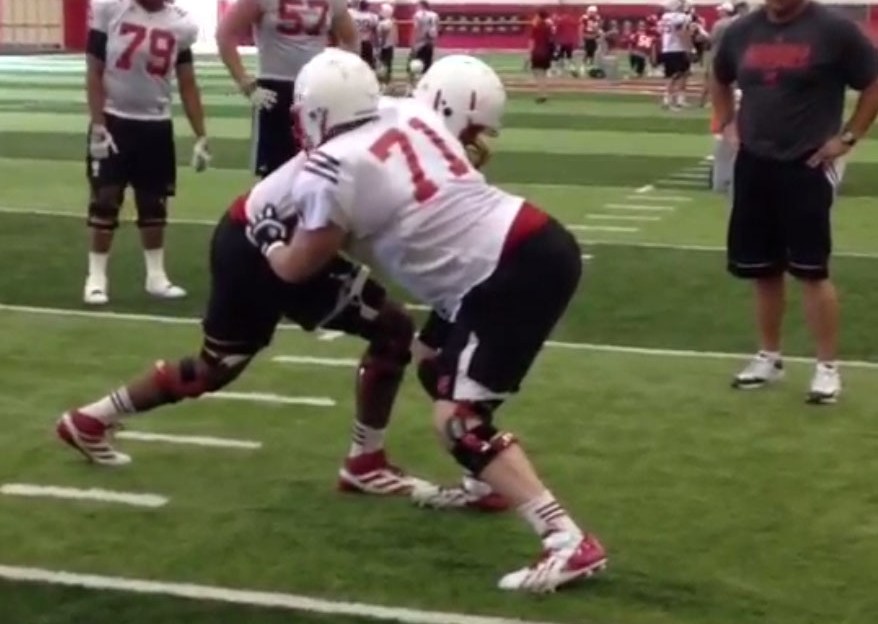 LINCOLN, Neb. – It?s difficult to believe that this is Bo Pelini?s sixth season in Lincoln. Time flies. He has done many good things, highlighted by last year?s trip to the Big Ten title game. But to get over the hump and to the program?s first league title since 1999, the defense needs to improve.

And in Monday's practice, the players looked good. Especially the d-linemen. Now, to be fair, today's practice wasn?t overly physical. The latter part of the drills were devoted to seven-on-seven work and ?green zone? work, which offensive coordinator Tim Beck described to me as working between the 10- and 4-yard lines into the scoring end zone. Speaking of Beck, he had trouble speaking today, as he recently underwent another procedure on his jaw as he looks to solve a sleep apnea issue.

The Huskers have their best offensive line of the Bo Pelini era. Guard Spencer Long is the bellwether. Again there wasn't a lot of heavy hitting today, but he moved well. Beck said he has three legit tackles in Andrew Rodriguez, Jeremiah Sirles and Brent Qvale. Jake Cotton is the other guard. If there was a game today, Beck told me Cole Pensick would start over Mark Pelini at center. Beck likes his depth, mentioning Mike Moudy and Ryne Reeves. He also likes true freshman David Knevel, a 6-9 product of Canada. The guy is huge; so is Zach Sterup.

Before arriving in Lincoln, I thought Nebraska had the best receiving corps in the Big Ten. And that thought hasn?t changed after watching practice. Kenny Bell is long, lean and fast. And his hair is in midseason form. Quincy Enunwa is big (6-2, 225), physical target who can go get the ball. Ex-quarterback Jamal Turner showed me good hands and feet. He showed me big-play moxie too. It?s a nice trio. But the riches don?t stop there. Alonzo Moore is an impressive redshirt freshman that Beck likes. Ditto Jordan Westerkamp. True freshman Kevin Gladney actually may earn a spot in the rotation. He?s impressive. So many options at this spot for the Huskers, an embarrassment of riches. Receivers coach Rich Fisher does a great job.

Taylor Martinez never will throw a consistently pretty ball, but it doesn?t matter. He?s improved his accuracy and is a killer runner. The backup job is up for grabs between Tommy Armstrong, Jr., and Ron Kellogg III. It was too close for me to call. Stay tuned.

The tight end spot lost key players in Kyler Reed and Ben Cotton. The top two options are banged up and didn?t work today: Jake Long and Sam Cotton. A kid that Beck likes is Cethan Carter, who doesn?t look or play like a true freshman. Nebraska will be OK here.

Yes, Rex Burkhead is gone, but Nebraska still has a nice collection of running backs-but experience is iffy. What Ameer Abdullah lacks in size (5-9, 190), he compensates for with speed, moves and savvy. I really like true freshmen running backs Terrell Newby and Adam Taylor. Beck described Newby's style as being similar to Abdullah?s; Beck said Taylor is a faster Imani Cross. Speaking of Cross, the guy is a flat-out beast. He caught my eye last season, and he continues to progress. There may be no more physical of a runner in the Big Ten.

I paid close attention to the defensive line, which has a lot to prove this fall. Line coach Rick Kaczenski gets after it and is a great, intense teacher. End Jason Ankrah is the lone starter back up front. He?s big and fast. He said after practice that he's worked as a de facto coach for the young guys over the summer. Ankrah is a leader, doing more post-practice work with his guys today. Overall, this was one of the best-looking fronts I have seen on the tour. I liked what I saw from guys like ends Avery Moss, Randy McMullen and Randy Gregory, a lean athlete who gets up the field. McMullen is also an impressive specimen who brings the heat. Inside, John Papuchis likes Thad Randle. He?s a bankable commodity. Vincent Valentine is a prototype run stuffer, but he also can move. Aaron Curry and Brodrick Nickens showed me some athletic ability. And keep an eye on true freshman Maliek Collins. He?s a 300-pounder who coaches say may play.

The starting linebackers are all new, but there are some nice, athletic options who will be upgrades. Believe me. Zaire Anderson is strong at the point of attack. David Santos and Michael Rose are fast. Jarad Afalava is physical. Papuchis pointed out true freshmen Nathan Gerry and Josh Banderas. Each is fast and active and likely will play.

The secondary could be the strongest part of the defense. Terry Joseph says he likes his unit. I do, too. Corners Ciante Evans, Andrew Green and Josh Mitchell bring savvy and smarts to the unit. Stanley Jean-Baptiste is a physical corner. Joseph says Mohammed Seisay is on track after falling behind last year after getting hurt. He?s a big corner. The safeties need to be watched. Corey Cooper, Charles Jackson, D.J. Singleton and Harvey Jackson. Evans told me after practice that Cooper is the best hitter in the secondary.

There is competition at kicker with Brett Maher gone. Touted Mauro Bondi is dueling with Western Illinois transfer Pat Smith, a fifth-year transfer who began his career at Missouri. He told me the staff has given no indication when a decision will be made on a winner.