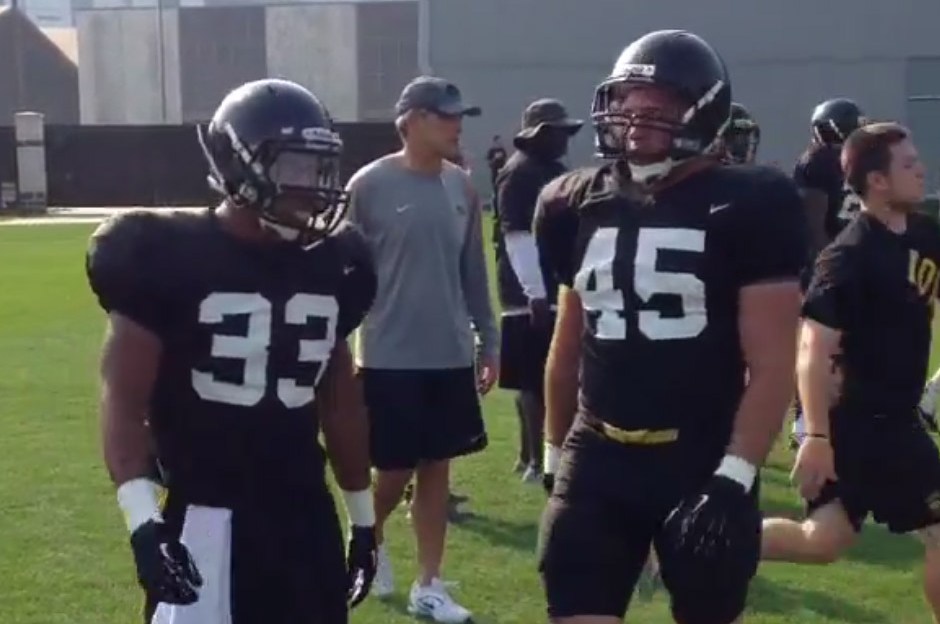 As Kirk Ferentz enters his 15th season in Iowa City, he finds himself looking to get his program back on track. The Hawkeyes? win total has gone from 11 to 8 to 7 to 4 last season. Myriad questions loom for Iowa as it winds down training camp, as the halcyon days of the early-2000s fade further into the rear-view mirror. But Ferentz and Co., often do their best work when expectations are low.

Officially, no starting quarterback has been named. But it looks like Jake Rudock has emerged as the favorite. More than anything, the sophomore is the most mature-and safest–option. But don?t discount C.J. Beathard, who has the best arm of the bunch and some moxie about him. I like the redshirt freshman, a gunslinger who can?t be careless. Ex-JC transfer Cody Sokol remains in the mix. Still, this is a two-man race. Expect a decision soon on who will run this new no-huddle, quick-paced offense installed by coordinator Greg Davis. The attack doesn?t go at hyper speed like Oregon; but it reminded me of the Kansas offense under Mark Mangino from a tempo standpoint, as the attack lets the defense set up and then looks to the sideline for a play.

A hex that seemingly has hung over the running back position finally may be lifting. The Hawkeyes have a plethora of options. I like Mark Weisman?s bruising style. He just moves the chains and finds a way to get it done. What a hard runner. Damon Bullock is a nice combination of size and speed. Diminutive Jordan Canzeri looks to be the fastest of the bunch. Kirk Ferentz told me before practice that Bullock and Canzeri will sometimes line up in the slot to get the speedsters in space. I had heard about true freshman LeShun Daniels before I arrived. And he looks good. He?s a big, physical back who some say is a faster Shonn Greene. That?s a bit too much hype, but you get the picture. Michael Malloy is cut from that same cloth. Throw in Barkley Hill, and you can see how much Iowa?s cup runneth over at this spot.

[ TWITTER: Check out our guys' tweets from Iowa practice ]

The receiver position is key for a passing attack that had just seven touchdowns via the air in 2012. Are there any difference-makers? Kevonte Martin-Manley is the leader, but he?s just a ?guy.? Nothing wrong with that, but his corps needs some juice. Sophomore Tevaun Smith looked good. At 6-2, 200, he?s a big target who can move. He could be a playmaker. JC transfer Damond Powell is another guy who caught my eye. He?s quick and elusive, having arrived just days before camp. Ferentz likes him. Don Shumpert continues to impress from when I saw him last year up until now. He?s having a good camp, according to Ferentz. Jordan Cotton looked speedy today.

At 6-7, 265, C.J. Fiedorowicz passes the eyeball test. But he doesn?t run very well. And he?s not overly physically despite his size. Still, he should be a nice weapon in the red zone and mismatch for defenses at a position that is loaded. How loaded? Kirk Ferentz thinks he has four or five tight ends who can play. There is a nice mix of size, speed and hands. Jake Duzey made a nice play near the end of practice. Ray Hamilton also will play a key role.

This is Iowa, so the o-line always is solid-at the very least. That will be the case again. I like the tackles, Brandon Scherff and Brett Van Sloten. Some think Scherff may be the Hawkeyes? next great blocker, in line with luminaries like Robert Gallery and Bryan Bulaga. Scherff looked powerful today in pass protection, manhandling several players (Watch!). Austin Blythe may have been a bit overmatched at times last season as a redshirt freshman at guard, but he looks good now on the interior at center. Conor Boffeli is one guard; Jordan Walsh and Andrew Donnal are battling at the other guard. Line coach Brian Ferentz flat-out gets after it.

[ INSTAGRAM: See all of our photos/videos from Iowa practice ]

The defensive line is another key spot. Who will rush the passer? I?m not sure there is a natural one on the roster. Inside, Louis Trinca-Pasat looked good. He?s strong and tough. Many tell me massive Carl Davis is an NFL prospect. At 6-5, 315, he?s a specimen. He needs to play with more consistency. Ferentz thinks he could get a push inside as a rusher. He?s a mountain. Dominic Alvis is a guy who showed me a bit of something off the edge. Nate Meier looks good, too, and Drew Ott has a burst. Ferentz says he may use a linebacker like Anthony Hitchens, Christian Kirksey or Quinton Alston as a rusher on passing downs.

The secondary has some potential. I like the safeties, including John Lowdermilk, Tanner Miller and Nico Law. Miller has one spot sewn up. Lowdermilk and Law are competing at the other safety slot. The corners need to continue to improve. B.J. Lowery and Jordan Lomax sometimes get lost in coverage. The depth is iffy because of youth, but there is talent.

Iowa has three top linebackers, which makes the position the strength of the defense. Christian Kirksey, Anthony Hitchens and James Morris form a nice triumvirate. Hitchens may be the best athlete of the bunch. He may be able to put his hand on the ground and rush the passer if needed. He?s fast and explosive. Morris is more of a lunch-bucket guy. Freshman Reggie Spearman needs to be watched. He could be good.