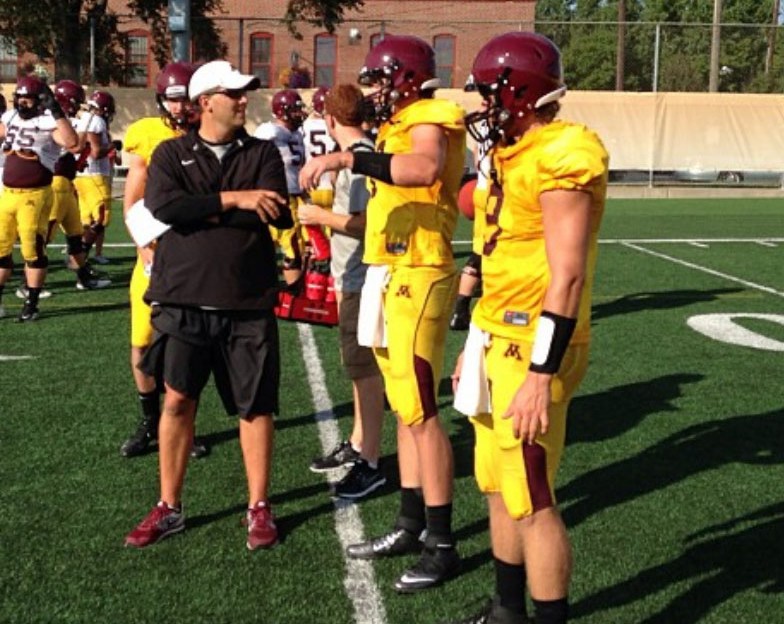 MINNEAPOLIS – Jerry Kill is getting closer to turning the corner in his third season at Minnesota. This team looks noticeably bigger-and more athletic-than when I was here last August to watch practice. And Kill told me afterward that the players are now leading themselves better-and buying in.

On the field, the offense is developing more big-play ability, and the play in the trenches is better on both sides of the ball. Here are my thoughts after watching the Golden Gophers practice.

Minnesota had issues on the offensive line last season, led by a rash of injuries at center. Still, the unit kept it together. Credit offensive coordinator/line coach Matt Limegrover. He?s a masterful teacher and motivator. This year?s front looks more Big Ten-caliber.

A few spots appear settled, with Zac Epping at left guard, Caleb Bak at right guard and Josh Campion at right tackle, whom Limegrover described to me as his best lineman. The center and left tackle spots are up for grabs. Limegrover told me Jon Christenson and Tommy Olson are battling at center. At left tackle, Ed Olson (Tommy?s brother) and Marek Lenkiewicz are competing. Ohio State transfer Brian Bobek isn?t even practicing as he deals with an infection. It?s not known when-or if–he?ll pad-up.

[ TWITTER: Check out our guys' tweets from Minnesota practice ]

With each successive practice, there seemingly is more definition to the quarterback spot. Philip Nelson had a baptism of fire last season. And, he is showing the benefit of that. He has looked sharper than Mitch Leidner and appears to be the starter. Nelson looks confident in his throws. He?s also a good athlete who shows command of the offense. The guy can move and execute this offense, which likes to run some option.

The running backs may play better just based solely on improved play up front. Instead of being met at the line of scrimmage, the backs may not encounter a would-be tackle until they reach the second level of the defense. Donnell Kirkwood is a blue-collar runner who is more apt to lower his shoulder than run around someone. Rodrick Williams Jr., is a 235-pound slugger who is nicknamed ?Nugget.? That?s all you need to know. The guy who is exciting is true freshman Berkley Edwards, the little brother of Braylon. The diminutive (5-9) Edwards has a gear that can?t be coached and adds much-need home-run pop to this too-often-plodding offense. True freshman quarterback Chris Streveler could be used here or at wideout, as the staff likes his athletic ability.

There are some nice options at tight end with Drew Goodger leading the way. Freshman Maxx Williams has been turning heads in camp. It?s impossible not to notice 6-9, 258-pound true freshman Nate Wozniak. He moves pretty well for his size and could one day develop into an intriguing option.

The receiving corps has as much potential as any on the team, even with Devin Crawford-Tufts off to run track. KJ Maye is having a nice camp. The guy is pretty quick and works out of the slot. A guy I like a lot is Jamel Harbison, who had last season basically end before it even started because of injury. Isaac Fruechte is a big, physical (6-3, 204) target with experience who sets a good tone. Derrick Engel is another big (6-2, 187) target who has played a lot. Limegrover told me he?s having a nice camp. A wild card is true freshman Donovahn Jones, a 6-3, 190-pound quarterback who is working with the receivers. Why? Because the staff wants to get him on the field to take advantage of his athletic ability.

The Gophers need help at linebacker, one of the weaker spots on the team. Aaron Hill is a lynchpin in the middle spot. He?s considered to be one of the team?s top leaders, along with offensive tackle Josh Campion and quarterback Philip Nelson. JCs De?Vondre Campbell and Damien Wilson may answer the prayers of coaches. At 254 pounds, Wilson is a load and the better of the duo. He should start. Campbell is a rangy pterodactyl at 6-5 who is tough to block. James Manuel also looks good. Jack Lynn and Nick Rallis are youngsters to watch. There is more athletic ability here. It was noticeable.

[ INSTAGRAM: See all of our photos/videos from Minnesota practice ]

The secondary looks pretty good, but speed may be an issue. Derrick Wells is moving like it?s midseason. He is back at cornerback after playing safety in 2012. He arrived on campus as a corner. There is a battle at the other corner between Eric Murray and Briean Boddy-Calhoun. Martez Shabazz also is in the mix. The safety spots look set with Brock Vereen and Cedric Thompson.

The defensive line could be solid. Tackle Ra?Shede Hageman is a beast. No d-lineman ran drills as hard or with as much force and effort. He?s ready to go. Cameron Botticelli is the other tackle; he?s a try-hard guy. Roland Johnson is a fire plug inside. Theiren Cockran is a long, lean end with explosiveness. He?s the team?s best rusher off the edge. Michael Amaefula and Ben Perry also show something off the edge.