Dienhart: Talent is there at Illinois, but it's young 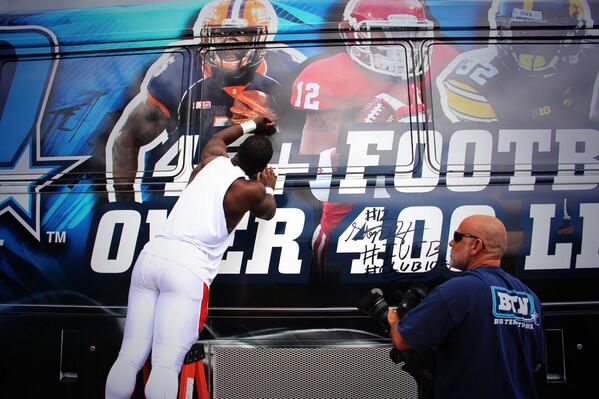 RANTOUL, Ill. – Tim Beckman is hoping for better results in Year Two after a 2-10 debut in Champaign that saw Illinois push its Big Ten losing skid to 14 games. This is a team whose best talent is young, so patience must be preached as growing pains are likely. Beckman made nice adjustments on his staff in the offseason, bringing in ex-Western Michigan coach Bill Cubit to run the offense.

Cubit is a sage mind who has changed things. Defensive coordinator Tim Banks remains and is doing the best with what he has. He?s a bright young mind. I like bringing in Al Seamonson to coach outside linebackers. He?s a good teacher with lots of experience. And new offensive line coach A.J. Ricker worked for Cubit at Western Michigan, making for a seamless transition. He?s an intense young coach with a bright future. Here are my thoughts from Illinois practice today.

Illinois is loaded at running back. Donovonn Young is a specimen. The guy is strong and tough, perfectly built for the downhill running system installed by new coordinator Bill Cubit. Young is a load to tackle and may be primed for a breakout. Josh Ferguson is small but quick. Look for him to be split out at times with Young in the backfield. Dami Ayoola impressed me last year and continues to look good. He?s a nice combination of speed and size.

[ TWITTER: Check out our guys' tweets from Illinois practice ]

Nathan Scheelhaase is cemented as the starting quarterback. Yes, he has a weak arm, but he?s a good athlete with experience who can execute the myriad short passes in this new offense. True freshman Aaron Baily has Illini Nation excited. And with good reason. The guy is a dynamic athlete, but he has a lot to learn. Cubit told me there will be packages for Bailey to run this fall. It will be fun to watch him battle for the quarterback job in 2014 with Oklahoma State transfer Wes Lunt, who looks like the best signal-caller on this roster. Lunt?s arm is terrific. He?s sitting out this season. Reilly O?Toole passes the eyeball test, but he seems to lack competitive fire.

The offensive line is worrisome. The starters look solid, with Simon Cvijanovic at left tackle; Ted Karras at left guard; Alex Hill at center; Michael Heitz at right guard; Corey Lewis at right tackle. Lewis moves as gingerly after myriad operations. Will he hold up? Can he handle speed rushers? He looked solid to today. The depth is beyond shallow. Scott McDowell would be a reserve but he has been hurt. Patrick Flavin is another option, but he may not be physical ready. Joe Spencer is a youngster to watch. Bottom line: If there is an injury, this unit is in deep trouble.

The line is the biggest issue on defense. Talking to coordinator Tim Banks, he knows there could be issues generating a rush and said he may have to manufacture one. He told me the best pass rusher is Houston Bates, who plays the ?Leo? spot. Banks also thinks Tim Kynard can get a push with his savvy and technique. Jake Howe and Austin Teitsma are lunch pail pluggers inside. Jarrod Clements and Dawuane Smoot are youngsters who could eventually develop into pass rushers. Still, there is an alarming lack of playmakers.

The receiving corps is filled with questions. Ryan Lankford is the top option, and he looked good going in and out of cuts today. He?s fast, too. Devin Church is a diminutive youngster who works in the slot. JC transfer Martize Barr can have just-add-water impact. He?s a big target. Former quarterback Miles Osei is quick and elusive. I like how he runs. Justin Hardee has shown flashes of maybe being a game-breaker. Marchie Murdock is a youngster to watch. There?s a lot to prove at this position.

Illinois needs to get its tight ends involved, as they are some good-looking athletes. Jon Davis didn?t go today, but he?ll be OK in time. Matt LaCosse is a rangy target with athletic ability. He was limited today but has all the requisite tools to excel. Evan Wilson also is a smooth operator. These guys may not be great, physical blockers at the point of attack, but they can run and catch. Get them the ball.

The secondary has talent-but most of it is young. The clear leader is strong safety Earnest Thomas. He?s well put together and is playing with confidence. He can cover, but the former outside linebacker is a better hitter. Spring star Taylor Barton looked good at free safety today. He?s a quick runner and good athlete. The corners are talented sophomores V?Angelo Bentley and Eaton Spence, who only lack lots of experience. Darius Mosely and Jaylen Dunlap are good-looking true freshmen corners who may play even if they aren?t ready.

The linebackers are the strong point of this suspect defense. Jonathan Brown didn?t work out today, as he is dealing with a concussion. We all know what he can do. Mason Monheim is an overachiever who is a bit undersized. But watching him, you could tell why he succeeds and led the squad in tackles as a true freshman in 2012. The guy won?t be outworked and stayed after practice to work with ex-Illini linebacker Matt Sinclair. Mike Svetina, cut from the same hard-work mold as Monheim, is the ?Star? with Eric Finney out with injury.