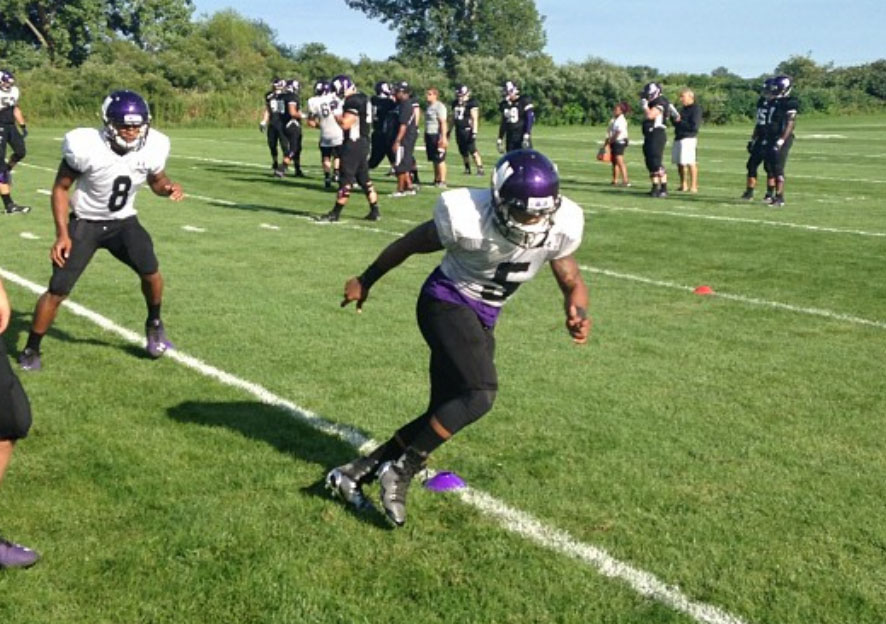 KENOSHA, Wis. – Much anticipation surrounds Northwestern. In fact, there was no school I was more looking forward to watching in camp than the Wildcats, who are coming off a 10-win season and the program?s first bowl victory since the 1948 season. Today, Camp Kenosha felt a little like mid-October during one of the more spirited stops on our tour.

Let's start with the offensive line, which is still coming together. Without a doubt, center Brandon Vitabile is the anchor. He looked good. You can see his command when he?s on the ball. Vitabile knows this offense inside and out. He?s a leader-and a physical blocker. Jack Konopka has flipped from right to left tackle with Patrick Ward gone. Konopka is tough and looked good in pass-blocking drills. Nice feet. The rest of the first line went thusly: left guard Geoff Mogus; right guard Ian Park; right tackle Paul Jorgensen. Bottom line: There are a lot of moving pieces on this front, and lots of shuffling could ensue right up to and beyond the first game of the season.

The running back situation is strong, with as many as five viable options. Venric Mark is in midseason form. The diminutive Mark has uber-quickness. A few times today, the ?Little General? showed his knack for stopping, changing direction and accelerating. The guy is special. Mike Trumpy is Mike Trumpy, a steady force who can catch the ball and get a tough yard. Malin Jones arrived last season amid some hype but was redshirted. He could be a factor this fall, as he has a burst. I liked Stephen Buckley, a rangy runner. And Treyvon Green is a physical veteran. Fitzgerald didn?t get carried away with his embarrassment of riches when I asked him about the backs. He said the situation will sort itself out.

The secondary could be among the best in the Big Ten, and Ibraheim Campbell is one the best safeties in the Big Ten. The staff knows what he can do and took a ?veteran?s day? today. Jared Carpenter is gone, but NU should be OK at the other safety spot with Traveon Henry and Jimmy Hall, who was in red. Henry is gonna be a stud. He?s well put together and can move. Cornerback Nick VanHoose looks smoother and smoother. I could tell his coverage skills have improved-and he?s never been shy about contact. Daniel Jones will team with VanHoose to give Northwestern an underrated corner duo. There is some decent depth with guys like Dwight White. Fitzgerald told me the one true freshman who is best equipped to play is safety Godwin Igwebuike, who has the body of an upperclassmen. He is a strong and athletic.

Northwestern sports a deep collection of receivers that compares favorably with the corps at Nebraska and Indiana. Christian Jones has been a camp star before we arrived but didn?t take part in practice. Cameron Dickerson caught my eye. He is a nice blend of size and speed, showing a burst in and out of cuts. Rashad Lawrence made a nice catch in team work late in practice. He will be a bellwether. Looking for a youngster to watch? Keep an eye on redshirt freshman Mike McHugh.

I love these linebackers. Middle linebacker Damien Proby is a sawed-off, powerfully built player who always is around the ball. Chi Chi Ariguzo looks and moves like a pro; he has moved from the weak to the strong side. He is my favorite Wildcats linebacker and a guy who could play anywhere in the nation. Collin Ellis and Drew Smith are in the mix on the strong side.

[ INSTAGRAM: See all of our photos/videos from Northwestern practice ]

The defensive line is a good example of how Fitzgerald has infused more talent into the program. Tyler Scott is a premier pass rusher. He?s more about power than speed but gets the job done with technique and effort. Dean Lowry is almost Scott?s twin, a big end with power. It?s fun to watch Deonte Gibson and Chance Carter work. Gibson is quick and athletic off the edge. He looks like a d-lineman that Ohio State or Michigan would have; Carter is an active force inside. Will Hampton is an athletic guy on the interior who can move. Defensive coordinator Mike Hankwitz told me end Ifeadi Odenigbo likely will be used mostly as a pass rusher, as he?s still developing. But physically, the guy looks like an SEC player.

The quarterback situation is among the best in the Big Ten. Kain Colter is one of the league?s most athletic players-and he has improved his passing. Trevor Siemian is riding shotgun again. He continues to throw the ball well and is an underrated athlete. These guys both can execute every phase of the offense, option, pass, etc.