Clothes Call: What they were wearing in Week 2 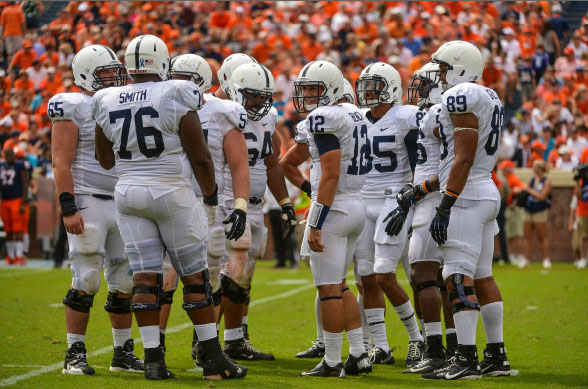 It's early in the season, so it comes as no surprise that we saw a lot of new looks across the Big Ten during Week 2 action. See all of the uniform and helmet alterations the Big Ten showcased Saturday in this post. Have a picture of a Big Ten uniform or arena/stadium alteration? Please tweet it to me (@BTNBrentYarina) for my Clothes Call blog.

Illinois went with the white top and blue pants for its road opener Saturday at Arizona State – a look it rarely rocks.

The Illini also busted out a blue facemask instead of its usual white look.

It's a look Indiana debuted last season, but the Hoosiers went with their white lids for the first time in 2012. It was a bold move, considering Indiana went 0-5 in the headgear last season. Perhaps Indiana will have better luck with the look in Year 2, because Indiana torched UMass. Win or lose, the helmet makes for a great all-white look.

Iowa honored its 1921-22 back-to-back Big Ten championship team with the throwback uniform below. The Hawkeyes looked a bit like Notre Dame, especially in the helmet and pants. The jersey was an interesting look, to say the least.

A different Minnesota defensive player is expected to wear late former teammate Gary Tinsley's No. 51, and it was LB Mike Rallis on Saturday. In Week 1, good friend Keanon Cooper did the the honors.

A week after busting out the white shoes and socks at home for the first time since the 1980s, the Huskers did the same for on the road Saturday.

To honor those who lost their lives on 9-11, Northwestern put the American flag in the "N" logo on its helmet and at midfield for its home opener against Vanderbilt.

The Wildcats also debuted their new home Under Armour uniform, and it looks even better than the road one debuted last week at Syracuse.

Penn State wore player names on the back of its jerseys for the first time ever, one week after doing the same on its iconic home uniform.

The Boilermakers, as reported Wednesday, added a Neil Armstrong sticker to their helmets. It's the circular decal above the American flag. The team will wear the sticker the rest of the season in honor of its distinguished late alum.