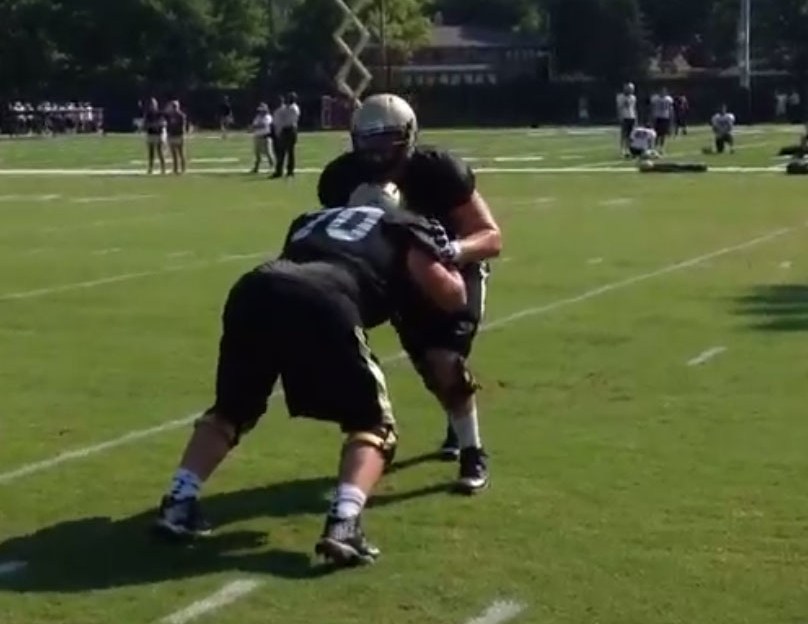 WEST LAFAYETTE, Ind. – Purdue ran a spirited practice Monday that moved in a well-organized fashion. Darrell Hazell is strong presence who floated from group to group, but he tends to gravitate to the offense-his background. There was more hitting in the Boilermakers' camp this season than last under Danny Hope. I came away impressed with a lot for a program that seemingly has a bright future.

The quarterback derby continues. Rob Henry ran with the "ones." He's a senior with starting experience who has improved his throwing. The biggest development is redshirt freshman Austin Appleby ascending to the No. 2  spot over true freshman Danny Etling. Appleby is a big signal-caller who is a bit more mature than Etling. And he showed a good arm and nice feet. Watching Etling, you can see why coaches are excited. The kid is a good athlete who can throw the deep out. He just has so much to learn. Offensive coordinator John Shoop is doing a good job with his signal-callers.

Akeem Hunt looks like a No. 1 running back. He's explosive and strong. But at 5-9, 184, how much wear and tear can he take? He is gonna need help carrying the load. Robert Gregory made the move from quarterback to running back in the spring. He showed some burst today. He's a bit of a bigger back. The staff moved wideout Raheem Mostert to running back to take advantage of his speed; he's also strong. But I'm not sure if he has the instincts.

[ TWITTER: Check out our guys' tweets from Purdue practice ]

The defensive line looks like the strongest area of the team. There is a nice mix of size and athletic ability. End Ryan Russell is the bellwether. He looks and moves like an NFL end. Bruce Gaston also is a load on the inside. Defensive coordinator Greg Hudson says Russell feels the eyes of Purdue's defensive end tradition staring down and him. And Russell told me he wants to live up to that standard set by guys like Rosevelt Colvin, Ryan Kerrigan and Shaun Phillips, among others. End Greg Latta is coming on. He has an angular body and a quick first step. Ryan Watson and Ryan Isaac are big bodies inside who move well. Hudson is really excited about true freshmen Jake Replogle and Evan Panfil. I liked watching Jules Williams. He's a strong athlete off the edge. He joined the team in the spring after staffers noticed him on the Purdue club rugby team. Great story.

The linebacking corps is a concern. A big concern. The best of the bunch, Joe Gilliam, is banged up. So, if they started today, Hudson says they would line up thusly: Sean Robinson, a former quarterback, and Andy James Garcia on the outside, with Will Lucas or Jimmy Herman in the middle. Hudson told me that Herman is the most athletic of the bunch-by far. Armstead Williams is a guy Hudson likes. He missed some assignments but is a nice athlete who brings some dynamic ability to the position. And this group needs dynamic ability.

The o-line has some size. The first team figures to be Kevin Pamphile at left tackle; Devin Smith at left guard; Robert Kugler at center; Jordan Roos at right guard; Justin Kitchens at left tackle, but he is dinged. Trevor Foy has moved from guard to tackle, which pleases Hazell. He didn't move well enough to play on the edge. Kugler looks like the best of the bunch. He lacks height but still can tend to play too high, Hazell told me. I love line coach Jim Bridge. He is an intense coach and a whirl of motion.

The offense is searching for playmakers. Hazell would like to develop six wideouts who can play. Several caught my eye, including Danny Anthrop, Shane Mikesky, B.J. Knauf and freshman Dan Monteroso, who has been a big camp surprise. Hazell likes true freshman Deangelo Yancey. Dolapo Macarthy is a big body (6-5/220), but he doesn't run very well, according to Hazell.

[ INSTAGRAM: See all of our photos/videos from Purdue practice ]

This finally may be the year for tight end Gabe Holmes to emerge. Former basketball player Patrick Bade is turning some heads. At 6-7, 255, Bade is a massive man who is developing. Carlos Carvajal is a rangy weapon who flashed some nice hands, but I'm not sure how well he blocks.

Ricardo Allen is an anchor at corner in the secondary, which could be solid. He's small, but Allen is quick on the field. And tough. Frankie Williams is opposite Allen. The safeties are try-hard Landon Feichter and Taylor Richards. Last year, the d-backs lined up based on formation. This year, Allen and Feichter will line up on the same side all the time. Depth falls off after that. But Darrell Hazell mentioned Anthony Brown as a guy to watch at corner. Normondo Harris is a key guy in the rotation. He's a big corner. Antoine Lewis is another guy who looked good today.

There is a battle at kicker between Sam McCartney and Paul Griggs. And the battle may last all the way until the first game. If the job is split, McCartney would handle short kicks and Griggs long kicks. But stay tuned. Each looked good today.