Did You See This? Assembly Hall adds "B1G" logo 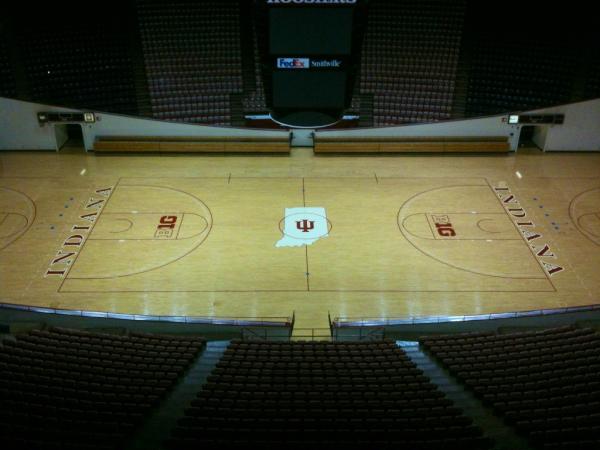 I'm pretty sure Indiana basketball fans will not be a big fan of Assembly Hall's latest cosmetic change. It's a small one – one that we're going to see on all Big Ten football fields this season (here's an example and another) and presumably all basketball courts (example) – but it's something the Hoosier faithful will need time to get used to. Of course, I'm talking about the "B1G" logo making its way onto the court. See a picture, courtesy of @JustinRayWright, of the new court design in this post.

It's not a huge change, as you can see. Still, one of the many great things about Assembly Hall is the simplicity of the court. Other than "Indiana" on both baselines and the outline of the state of Indiana at midcourt, the court is never cluttered with any writing or logos. That will change in the 2012-13 season, thanks to the conference requiring it on playing surfaces.

I saw the questions on the Big Ten logo on the court. Non negotiable item. That is mandated for all Big Ten programs.

The good news: Indiana didn't make any other changes to the court. All in all, this is a minor thing that Indiana fans will get used to in time. And, who knows, maybe one day they'll think the court would look weird without the logos.

Here's what fans were saying about the logos on Twitter:

@BTNBrentYarina Big Ten logo at Assembly Hall IS A SHAME!

@BTNBrentYarina This is truly an abomination. How did this ugly, over-sized, unfitting horror end up on such a pristine court?

Hate it, but not a big deal RT @BTNBrentYarina Responses to B1G logo on Assembly Hall court exactly what I expected: http://t.co/6XF5sN0w

@BTNBrentYarina at least it's not blue. Doesn't look too bad.

Looks fine to me RT @BTNBrentYarina PHOTO: Indiana fans may want to look away, but the "B1G" logos have been added … http://t.co/KAsyzWF1

@BTNBrentYarina It's a sad day. ?