Did You See This? New Illinois football field design 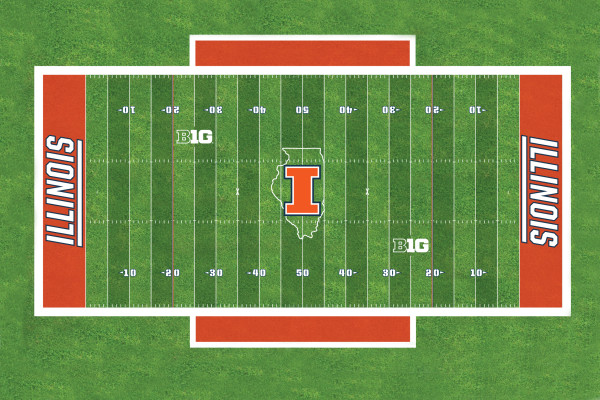 The Illini basketball team has the state of Illinois outlined at midcourt at Assembly Hall. Many other college arenas do the same with the outlines of their states. The practice, for whatever reason, isn't as popular in football stadiums across the nation – Indiana does it. Make it two Big Ten teams now. @IlliniAthletics tweeted a picture of the team's new field design, and it includes the outline of the state of Illinois at midfield. Just like the basketball team. See the photo in this post.

You'll also notice the new "B1G" logos located on each of the 25-yard lines. Those will be on the field at every Big Ten stadium this fall. Here's what it looks like at Ohio Stadium.

Back to the outline of Illinois, here it is on the basketball court at Assembly Hall:

Not sure if this will catch on across the nation, but give Illinois credit for trying it out. Why not force the image of your state in the face of potential recruits as much as you can? It can't hurt.

Speaking of state outlines at midfield, check out East Carolina's: