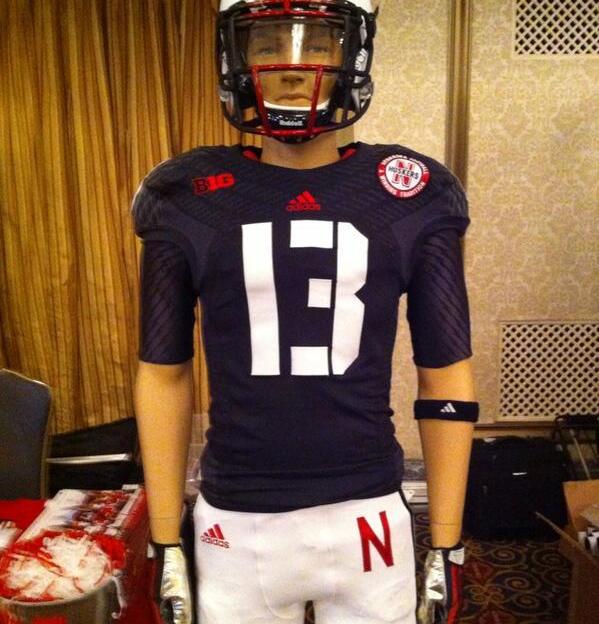 With kickoff less than a week away, coupled with the fact Northwestern and Wisconsin both just unveiled new alternate helmets, it's time to take one last look at all the different uniform and helmet designs we'll see in the Big Ten this fall. See my updated roundup, first compiled at media days, in this post. Did I miss something? Tweet it to me (@BTNBrentYarina).

The Illini, as BTN.com reported earlier, have a new primary lid (see below) and will use last year's matte blue helmet as a secondary option. An Illinois spokesman said there are no plans to introduce any other new looks. He also said that Nike is in the middle of a rebranding process with the school, which figures to yield new uniforms, helmets, font and logos in 2014.

Who can forget the stir Indiana's helmet reveal created early last month? There's a lot of new helmets (see entire collection), but none is more attention-grabbing than the polarizing chrome candy stripe lid (see below). Also of note: Indiana's jerseys will feature adidas' new TECHFIT ShockWeb design, which is fancy for lightweight mesh material on the shoulders and down the sides.

Iowa representatives said the team has no plans to unveil any new uniforms or helmets. However, Nike has added its omnipresent flywire collar to Iowa's jersey (via @uniwatch).

A Michigan representative said: "We don't have anything planned." My take: Stay tuned, because this is a team that has unveiled several new looks for recent big games and bowl games.

A Michigan State spokesman said the Spartans have nothing new in the works, but that they may bust out the chrome helmet again at some point.

Nike just provided the Gophers with new uniforms and a matte helmet last season, so there's nothing new on their front. The only change, according to a Minnesota spokesman, is that the "GT51" patch the Gophers wore on last year's jerseys to honor late former teammate Gary Tinsley is no more.

By now, you've probably heard about Nebraska's alternate unis for the UCLA game. It's a bold look, as it features black instead of red (see below). The helmet also has a two-tone facemask. The only other change, according to a Nebraska spokesman, is the move to adidas' new TECHFIT ShockWeb jersey design, which, again, is fancy for mesh material.

In its short time working with Under Armour, Northwestern hasn't held back. That will continue in 2013, as the Wildcats have added a new white alternate helmet to their collection (glossy; patriotic; matte from bowl). Northwestern will wear the new white lid in Week 1 at Cal to form an all-white look, while the patriotic one is reserved for the first home game, Week 2, per tradition. A Northwestern spokesman also said the team still has the stickers to its other matte helmet available, so it has as many as five helmets to choose from. Speaking of stickers, helmet stickers might be added.

A cool change here: Ohio State has added seven Buckeye leaves – corresponding with the program's number of national titles – to the back of the jersey collar. An Ohio State spokesman said the team doesn't expect any other changes. Keep in mind, though, that this is a program that isn't afraid to bust out new Nike looks for big games. Like this. And this. And this.

A season after Penn State added nameplates for the first time and put Michael Mauti's No. 42 on helmets for the season finale, the Nittany Lions are making another tweak. This year, the jerseys will feature a Nittany Lion logo at the bottom of the collar (see below). As for the names on the back of the jerseys again, a team spokesman said that's up to Bill O'Brien.

Purdue doesn't expect to change much in its first year under Darrell Hazell. As BTN.com previously reported, the Boilermakers will bring back helmet stickers this fall.

Like Indiana and Nebraska, the Badgers will sport adidas' new Techfit ShockWeb uniforms. They're also moving the numbers on their jersey sleeves to shoulders and busting out a new red alternate helmet. The helmet also will feature an "OTIS" decal in memory of team manager Kevin Green, nicknamed Otis, who died in a car crash (via @uniwatch). Wisconsin is making another slight change, one fans likely won't notice, as the "Camp Randall: This is our House" logo on the inside of the collar has been redesigned.

Off the field, there are a couple other redesigns to spotlight.

The first one has to do with a mascot. Yes, that's right. Check out the new (and improved?) Herbie Husker.

Oh, and if you weren't aware, this season's Rose Bowl is the 100th all time. To commemorate the milestone, there's a new trophy. It's gold, and it will only be used this year.

The Rose Bowl trophy for this year's game, the 100th Rose Bowl. pic.twitter.com/yQl7JnS1Ou