Dienhart: 'Best is yet to come for this program' 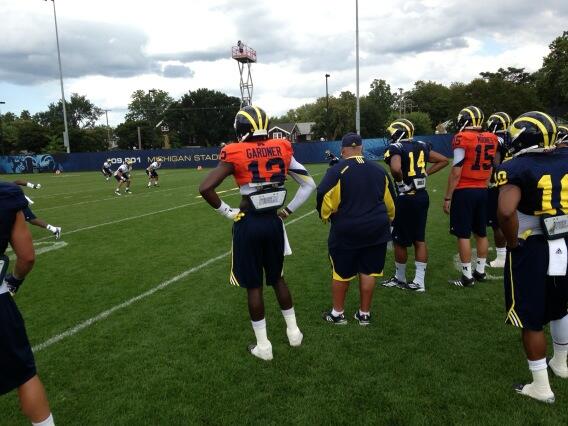 ANN ARBOR, Mich. – Michigan is the pick of many to win the Legends Division this season. And, after watching the Wolverines practice today, I can see why. Michigan looked good, easily passing the eyeball test.

The Wolverines had a hard-hitting practice in the morning, with offensive coordinator Al Borges telling me there were several scraps between players. After that hard session, the team went at it hard this afternoon, too.

It?s fun to watch Brady Hoke coach. He?s a hands-on boss who loves to get into the action with the defensive line, constantly yelling and chirping the entire practice.

I asked Hoke after practice which true freshmen who weren?t here in the spring who could impact. He mentioned Delano Hill and Jourdan Lewis in the secondary; Patrick Kugler on the o-line; Maurice Hurst on the d-line; Mike McCray at linebacker, among others. Overall, this is a young team with the majority of the most talented players not being upperclassmen. The best is yet to come for this program as the talent matures.

The defensive line looks good. I came away impressed with true freshman end Taco Charlton. What a specimen, at 6-6, 270. I can?t wait to see this kid in another year or two when he fills. I have to think he?ll be a 300-pound end eventually. He should have an impact as a pass rusher this season. Frank Clark is the guy who is supposed to bring the heat. He?s the veteran up front and he set a good pace in today?s practice, showing an explosive step. Mario Ojemudia often is a forgotten man off the edge, but he is a key guy. The body of tackle Ondre Pipkins continues to transform. Richard Ash and Quinton Washington also looked good moving today.

The linebackers should be watched. Joe Bolden, Desmond Morgan and James Ross, among others, could form a nice crew. This unit has continued to get better and showed good athleticism today. Bolden was all over the field. Remember, Jake Ryan is still recovering from ACL surgery, so this unit isn't at full strength.

The secondary looks like the strongest area on the defense. Blake Countess showed no residual effect from the knee injury that ruined his 2012 season. He was moving well. Thomas Gordon is a key guy at safety. When I asked Hoke who the leader would be on defense, he didn?t hesitate in identifying Gordon. Safety Jarrod Wilson looks like a linebacker-and hits like one, too.

Hoke told me the battle for the spots on the interior of the offensive line remain up for grabs. There are a number of guys still in contention at guard, including Kyle Kalis; Joey Burzynski; Graham Glasgow; Blake Bars; Ben Braden. Kalis looks like a stud. I have to think he?ll nail down a spot. Taylor Lewan is in midseason form. The guy is a beast-a true sun blocker–who I saw offering instruction to linemates. He?s a stud who is like another coach.

It was interesting to watch the wideouts. Jeremy Gallon, Drew Dileo and Amara Darboh lined up with the first team. Devin Funchess was the tight end. Borges marvels about the strength of Darboh?s hands. He?s has a thick body and looks primed for a break out. This is the kind of wideout Michigan had back in the day.

The pass catchers with QB Brian Cleary were Joe Reynolds, Jehu Chesson and Jeremy Jackson. Jake Butt was the tight end. The pass catchers with QB Shane Morris were Csont?e York, Jack Wangler and Bo Dever. The tight end was Khalid Hill. Borges likes Chesson. In fact, he said he is the fastest wideout. Funchess looks much bigger to me. He could be in store for a big season. The guy is a freak. True freshman wideout Da?Mario Jones made some nice catches. Keep an eye on him.

Devin Gardner is chiseled. And, he threw well today. Borges told me Gardner loves to study film much more than Denard Robinson did. I asked Borges to compared Gardner to Auburn quarterback Jason Campbell, who Borges coached on the Plains. Borges said Gardner is more athletic but Campbell was more accurate. But Borges thinks Gardner can become as accurate as Campbell. Shane Morris showed more speed and athleticism than I thought he possessed.

Borges says RB Fitz Toussaint is playing like he has a chip on his shoulder coming off injury. He looks good. Touted true freshman back Derrick Green was banged up and spent the practice doing conditioning work. He is a big-bodied kid who reminded me of Ironhead Heyward. Hoke says he will be OK.