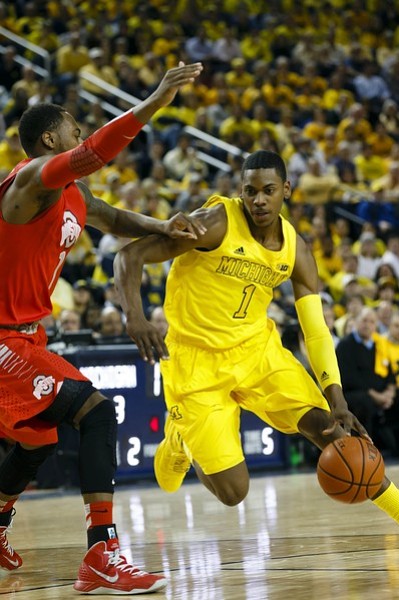 There was a ton of talk about the uniforms leading up to Michigan's thrilling win over Ohio State on Tuesday, and for good reason. Both looks, let's just say, made bold fashion statements, as Michigan's adidas monochromatic look could blind someone and Ohio State's Nike Hyper Elite uniform could be mistaken for a practice jersey. Once the game tipped off, the talk got even better, even funnier.

Here are the uniforms: See several of the tweets about the Ohio State and Michigan unis below.

We need Michigan State also in this game as the Relish to balance it out.

Just tuned in to OSU-Mich after finishing recruiting story for tomorrow. Mich looks like a spilled five-pack of Juicy Fruit gum.

I thought Michigan was Maize and Blue. Not Yellow Mustard and Blue.

When I close my eyes, I can still see Michigan running up and down the court.

I dont know what is brighter Michigan's uniforms or Aaron Craft's rosie cheeks.

Michigan Human Highlighters vs. Ohio State Fighting Logos about to tip, get your popcorn ready!

Even these guys think that the #TSUN uniforms are a bad mistake pic.twitter.com/L5euZRhJ

The Nike uniforms look like something a team would wear during practice, not actual games. The Adidas uniforms are just terrible.

?I said I want this game to be full of high*lights*, not high*lighters*, guys.? -Dave Brandon

For what it's worth, the jerseys are much more tolerable in person than on the TV, where they look much brighter

Those Michigan basketball unis will result in the decommitment of at least 4 football recruits tomorrow.

Where did Michigan stash the umbrellas to match the galoshes?

Yikes, going to be hard to watch Michigan in HD tonight. Too much yellow

You can't see the names on the backs of Michigan's uniforms. I think I've tweeted that before. Oh yeah, I have…. Outback Bowl…round 2.

Whoa, just tuned on the Michigan game. Those uniforms are, um, bright.