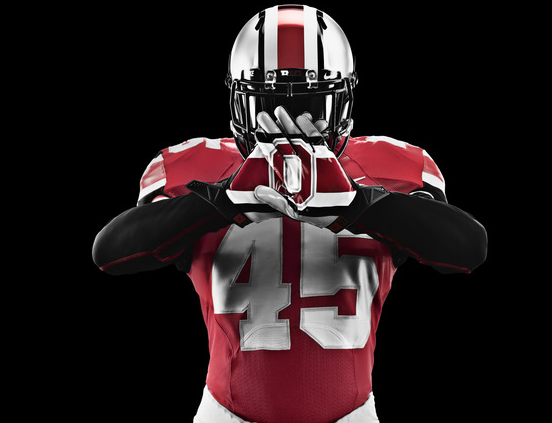 It was rumored to happen, and it will. On Monday night, Ohio State unveiled the Nike Pro Combat Rivalry uniform the Buckeyes will wear against Michigan on Saturday. According to Nike, this is the "most technically advanced integrated uniform system."

A couple things stand out: 1. The numbers are much larger and reflective; and 2. the helmet features a thick stripe down the middle, similar to last year's lid against Wisconsin. This stripe is more Ohio State-ish, though, as it's a blown up version of the current one.

For inquiring minds, this marks the third time in the last four years Ohio State will wear Nike alternate duds for the Michigan game (see photos below). Last year broke a two-year streak of doing so, and the Buckeyes lost at Michigan.

Here's a view of the back of the uniform:

We'll be tracking the Michigan-Ohio State game Saturday on our Michigan at Ohio State page. Use that link throughout the game for quarterly recaps, live stats and play-by-play.