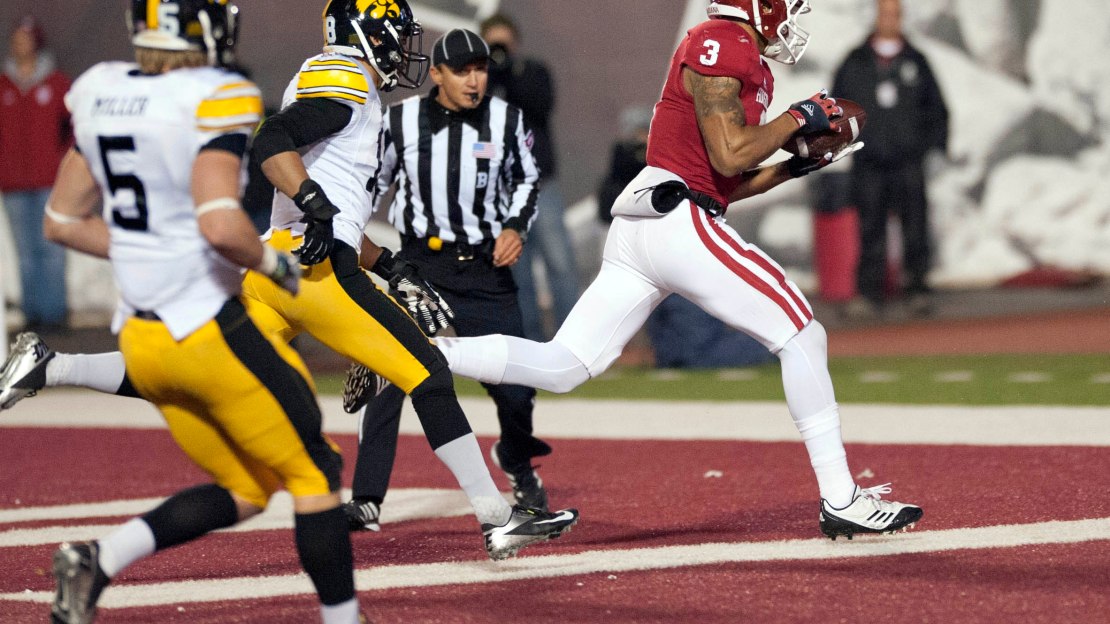 Not a lot of movement in my latest Power Rankings following Week 10 of the season, as Ohio State and Nebraska retained possession of the top two spots. Indiana was the biggest mover, as it continued to turn heads with a home win over Iowa. See where all 12 teams land this week in this post.

2. Nebraska (7-2, 4-1). Ever since Bo Pelini said his Huskers must win out after allowing 63 points in a bad loss at Ohio State, Nebraska is 3-0 and riding high. The defense has made a big turnaround during the run, which has featured fourth-quarter rallies at Northwestern and at Michigan State. This is looks like a special team.
Last week: 2
Next: Penn State

3. Michigan (6-3, 4-1). The Wolverines showed great bounce back with a convincing 35-13 win at Minnesota. Devin Gardner displayed promise in a surprise start, but the defense continues to be the real story for the Wolverines as they head into the home stretch. It?s just too bad Gardner wasn?t ready to play at Nebraska two weeks ago. Maybe Michigan would have won that game. We?ll never know.
Last week: 3
Next: Northwestern

4. Northwestern (7-2, 3-2). The Wildcats still cling to Legends Division title hopes, but they have to win out-and get some help-to have a chance. Northwestern was off last week and has a must-win game at Michigan this week. The offense must pick up where it left off in a win over Iowa.
Last week: 4
Next: at Michigan

[RELATED: Where do Big Ten teams land in latest polls?]

5. Penn State (6-3, 4-1). The Nittany Lions continue to impress, bouncing back from that home loss to Ohio State with a convincing 34-9 win at Purdue. Once again, Matt McGloin dazzled as a passer and a leader in what is turning out to be a season to remember, as the program continues to focus on what it can control.
Last week: 5
Next: at Nebraska.

6. Wisconsin (6-3, 3-2). The Badgers were off this Saturday, but they had work to do as they move forward without injured quarterback Joel Stave. The chief goal: selecting a new signal-caller. How will the offense function during a key stretch run with a new quarterback? Next week?s game at Indiana is a must-win.
Last week: 7
Next: at Indiana

7. Michigan State (5-5, 2-4). That?s four home losses for the Spartans, who still aren?t bowl eligible with two games remaining. The struggles of the passing game continue, and the defense was ripped for 313 yards rushing by Nebraska. That-more than any controversial calls by the officials-was why Michigan State got beat.
Last week: 6
Next: off

[RELATED: How did we do? Week 10 Big Ten picks revisited]

8. Indiana (4-5, 2-3). Saturday's 24-21 win over Iowa helped Indiana tally back-to-back Big Ten wins for the first time since 2007. Even more vital-it sets up a big game next week in Bloomington vs. Wisconsin for an Indiana team that controls its destiny. Amazing. This is a confident team that?s playing well on both sides of the ball.
Last week: 10
Next: Wisconsin

9. Iowa (4-5, 2-3). A 24-21 loss at Indiana may be rock bottom. Maybe not. The Hawkeyes have lost three games in a row and still need two more victories to become bowl eligible. You have to like Iowa?s chances vs. Purdue next week. But after that are games at Michigan and vs. Nebraska. Will the Hawkeyes do it?
Last week: 8
Next: Purdue

10. Minnesota (5-4, 1-4). The Gophers still are a work in progress, taking some lumps in a 35-13 home loss to Michigan. Minnesota still needs one more victory to become bowl eligible. And it could happen next week at Illinois. However this turns out, you get the feeling this is a program that?s pointed upward under Jerry Kill.
Last week: 9
Next: at Illinois

11. Purdue (3-6, 0-5). That?s five losses in a row for the Boilermakers, who must win their last three games to become bowl eligible. The offense had disappointed, but the defense has been an even bigger flop. The latest fiasco was an uninspiring 34-9 home loss to Penn State that frankly wasn?t even that close.
Last week: 11
Next: at Iowa

12. Illinois (2-7, 0-5). That?s six losses in a row following a 52-22 thumping at Ohio State. It?s also seven losses for the Illini, who officially are eliminated from bowl competition after going to the postseason the last two seasons. Offense? Defense? Special teams? They all continue to struggle.
Last week: 12
Next: Minnesota