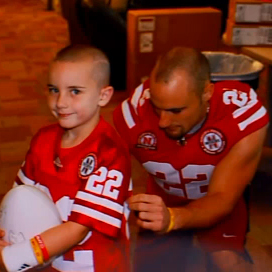 Basketball is in the air, Big Ten fans. Teams have started practice and there are still a few "Midnight Madness" events to look forward to this weekend. Let's not get ahead of ourselves, though, because it's still football season. See BTN.com's top 10 most-read stories of Week 7 in this post. Also, watch our terrific "Team Jack" feature, a story that happens to land two spots on this list, now.

10. Dienhart: Go ahead and book that trip to Indy
Wisconsin sent a loud message today. Did you hear it? Surely you did. I know it resonated with me. The Badgers? emphatic 38-14 win at Purdue clearly marks Wisconsin as the team in the driver?s seat to earn the Leaders Division spot in the Big Ten title game for a second season in a row.

8. Best of Week 7: De facto Leaders title game?
This isn?t a great weekend for games, especially with Nebraska and Penn State off. And the league?s two best teams appear to be in mismatches, with Michigan hosting Illinois and Ohio State visiting Indiana.

7. Michigan dominates, shuts out Illinois, 45-0
Denard Robinson threw two touchdown passes and ran for two scores, leading No. 25 Michigan in a 45-0 win over Illinois on Saturday. The Wolverines (4-2, 2-0 Big Ten) got a scare when Robinson left the game with an undisclosed injury late in the first quarter. He missed just one-plus possessions, though, and returned to score on a 6-yard run to put Michigan up 17-0 late in the first half.

6. Dienhart: My bowl projections as race shapes up
Six weeks are in the books, and the bowl picture is coming into a bit sharper focus ? a bit. To review: The Big Ten has tie-ins with eight bowls-but it has only 10 bowl-eligible schools, as Penn State and Ohio State are banned from the postseason in 2012.

5. Revsine: Crunch these Week 7 football stats
Is it me, or has this Urban Meyer fellow had a bit of an impact at Ohio State?  I know there are still some issues with this team - a bit too reliant on Braxton Miller, a tad shaky at times on defense - but that was still a pretty impressive performance on Saturday night.

3. BTN profiles 'Team Jack' & fight against cancer
On this Saturday?s ?Big Ten Football Pregame Show? presented by Auto-Owners Insurance, our crew profiles the touching story of a young brain cancer patient who is also a big Nebraska football fan. Jack Hoffman and Nebraska running back Rex Burkhead have formed a special relationship, and the two have worked together on ?Team Jack.?

2. Power Rankings: Badgers, Ball making moves
Montee Ball and the Wisconsin offense sure look like they are back. While still not nearly as explosive as last season?s unit, the offense has found its footing. After all, it went for 645 yards of offense in its 38-14 win at Purdue.

1. Week 7: We predict all five Big Ten games
Every week, BTN.com?s Brent Yarina (@BTNBrentYarina) and Tom Dienhart (@BTNTomDienhart) offer their predictions for each Big Ten football game. We also provide a poll for all of the games so fans can vote for their winners.