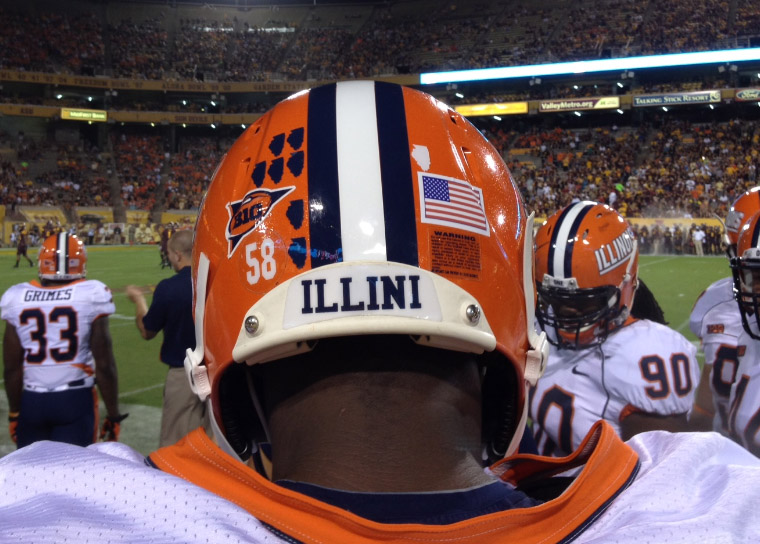 Another week of football is in the books, and there's only one more week of non-conference action before the games really start to count. See BTN.com's top 10 most-read stories of Week 3 in this post.

10. Clothes Call: Illinois football adds helmet stickers
First-year Illinois head coach Tim Beckman was an Ohio State assistant from 2005-06, so it should come as no surprise he?s a fan of helmet stickers. The Buckeyes, of course, reward players with Buckeye stickers that go on their helmets. This season, the Illini are passing out helmet stickers of their own.

9. Dienhart: 5 things I learned in Week 3
A week after suffering through the conference?s first six-loss non-conference week since 2000, the Big Ten bounced back with an 10-2 clip in Week 3 action. The victories included wins over BCS foes Cal and Boston College, one week after the Big Ten went 1-6 versus such foes. Northwestern, for the third consecutive week, notched a win over a BCS team.

8. 1st Quarter Recap: Michigan 14, UMass 0
No. 18 Michigan?s aerial assault is on point as the Wolverines lead 14-0 at the end of the first quarter thanks to 81 passing yards in the quarter. Michigan scored when Denard Robinson tossed a 26-yard touchdown to Devin Funchess to polish off a five-play, 65-yard drive, giving the Wolverines the game?s first lead.

7. Revsine's Numbers: Stats weren't too pretty
Wow. Last week didn?t go so well. It was a not a pretty scene, as we sat, mouths agape, in the BTN green room and watched the Big Ten Conference suffer through a difficult Saturday. And that wasn?t just because Gerry DiNardo was drooling. Sorry, too easy. Not true. Though he did pull out his ubiquitous hankie a few times.

6. Dienhart: 12 Big Ten questions for Week 3
Another Saturday looms. And, I still have questions. For example, can the Iowa offense finally get started? Here are my most pressing queries for each Big Ten team entering Week 3.

5. Clothes Call: Is this Iowa's new Pro Combat Uniform?
What you see above is the uniform Iowa is rumored to wear Nov. 10 against Purdue. Not so fast, Iowa SID Matt Weitzel warns.

4. 1st Quarter Recap: N. Iowa 10, Iowa 7
In the first quarter, Northern Iowa?s David Johnson stood out. He ran for 27 yards and one touchdown and caught one pass for 30 yards, and the Panthers lead 10-7 at the end of the first quarter. Northern Iowa struck first when Johnson pounded in a one-yard touchdown run, the final play of an eight-play, 83-yard drive.

3. Week 3: We predict all 12 Big Ten games
Every week, BTN.com?s Brent Yarina (@BTNBrentYarina) and Tom Dienhart (@BTNTomDienhart) offer their predictions for each Big Ten football game. We also provide a poll for all of the games so fans can vote for their winners. After two weeks, it?s Tom and BTN.com fans on top, at 19-5, while Brent is in the cellar, at 17-7.

2. Bowl Projections: Dienhart's list post Week 2
The season is still in its infancy, so the bowl picture remains lucid. Very lucid. The Big Ten has tie-ins with eight bowls-and it has only 10 bowl-eligible schools, as Penn State and Ohio State are on NCAA and banned from the postseason in 2012.

1. Power Rankings: New team tops Dienhart's list
Following Michigan State?s 20-3 loss home loss to Notre Dame, there?s a new team on top of my Week 4 Power Rankings. Who is it? Here?s a hint: It?s the only remaining undefeated team from the Leaders Division.