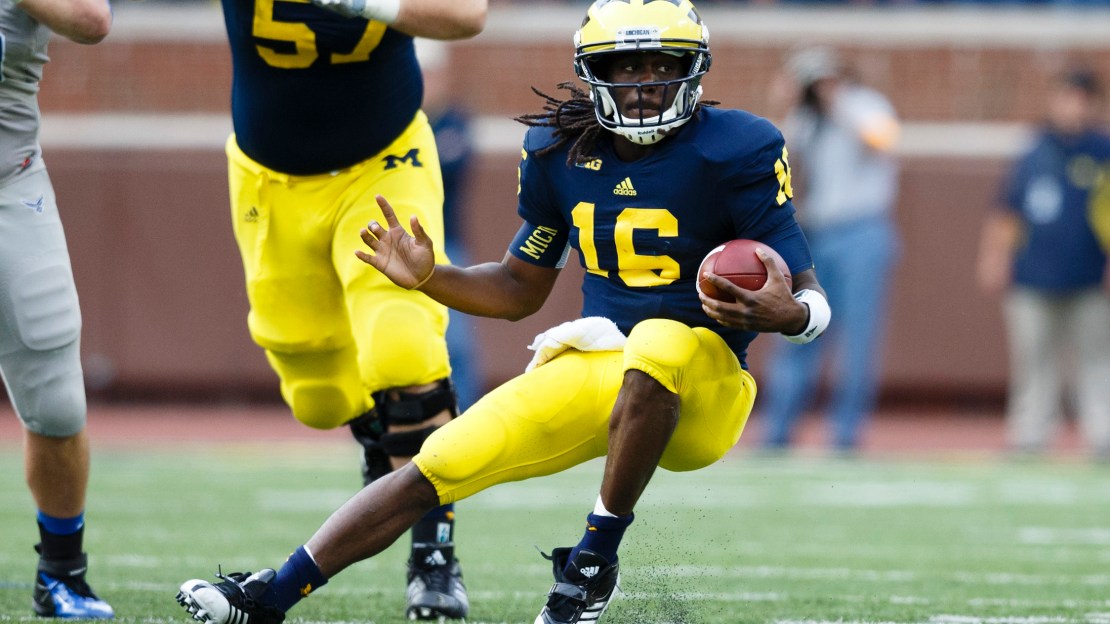 It was a busy afternoon of Big Ten football action, with six games during the middle block. The results weren't exactly what the Big Ten had hoped for, either, as it went 3-3 after opening the day 2-1 in the early games. Read my snap reactions to the afternoon games in this post.

Live on BTN/BTN2Go: Northwestern vs. Vanderbilt. Also live: Nebraska vs. UCLA. And at 10:30 p.m. ET, it?s Illinois vs. Arizona State.

Michigan State 41, Central Michigan 7
1. Much was made of the inconsistent effort of Spartan receivers in the opening win over Boise State. Well, the wideouts took a big step forward today. In the first half alone, Bennie Fowler (7 for 92) and Keith Mumphery (4-52) each set career highs for receptions and receiving yards. Fowler finished with eight catches for 100 yards and a score.

2. QB Andrew Maxwell got on track and will continue to improve. He hit 20-of-31 passes for 278 yards and two touchdowns. Last week, he hit 22-of-38 passes for 248 yards with no touchdowns and three picks. Maxwell looks more comfortable in the offense. Of course, playing a MAC team helps.

3. The defense continues to dominate, as the unit still hasn?t allowed an offensive touchdown. Michigan State generated three turnovers and limited Central Michigan to 238 yards, with only 65 coming on the ground. This was a suffocating effort from what clearly is the top defense in the Big Ten.

Notre Dame 20, Purdue 17
1. The defense is legit and one of the best in the Big Ten. Especially the line. Tackles Kawann Short and Bruce Gaston had big games and dominated on the interior. Cornerback Josh Johnson also had a big game and looks like an NFL prospect. The Boilermakers held Notre Dame to 52 yards rushing on 36 carries (1.4 ypc).

2. The offense lacks explosion. There just are too few playmakers on this attack, as it too often has to execute 10-, 11-play drives to score. The Purdue attack gained a mere 288 yards. The longest pass play was 27 yards. The longest run was 15 yards by QB Caleb TerBush.

Michigan 31, Air Force 25
1. Denard Robinson regained his old form after a difficult debut last week vs. Alabama, when he hit 11-of-26 passes for 200 yards, a TD and two picks and ran 10 times for 27 yards. On this day, Robinson hit 14-of-25 passes for 208 yards for two touchdowns and a pick. He also ran 20 times for 218 yards and two scores. Robinson became the first player in major college football since at least 1996 to have at least 200 yards rushing and 200 passing in three games.

2. The defense made a play when it had to, making a fourth-down stop with 1:28 left to seal the victory. The numbers weren?t great, as Air Force notched 417 total yards with 290 coming on the ground. But this is a tough Falcon triple-option offense to prepare for and defend.

3. Devin Gardner may be a legit wideout. On this day, he caught five passes for 63 yards and a touchdown. He could prove to be a big target and nice part of a wideout corps that also includes Roy Roundtree, Jeremy Gallon and Jerald Robinson. The Wolverines need Gardner?s playmaking skills.

Indiana 45, UMass 6
1. The offense showed it can score points and be potent. That has to make Kevin Wilson happy. The Hoosiers tallied 606 yards, rushing for a whopping 321 yards on 52 carries. Wilson has said his attack needs to score more. Mission accomplished-for one week, at least.

2. The defense showed life after an inconsistent effort last week vs. Indiana State. UMass had just 264 yards of offense. That?s a nice effort for a Hoosier defense that ranked 12th in the Big Ten in total defense last season.

3. Cameron Coffman showed he can make this offense go. After Tre Roberson went down with injury, Coffman hit 16-of-22 passes for 159 yards and a score. Robinson is done for the season, so it?s good to know Coffman-a JC transfer–can execute the attack.

Iowa State 9, Iowa 6
1. The Iowa passing game still isn?t clicking. After the attack struggled in a narrow win over Northern Illinois, it continued to sputter vs. Iowa State. James Vandenberg hit 20-of-42 passes for 236 yards with no touchdowns and two picks. He tossed 25 touchdowns in 2011; he has none this season. This is an attack that is aching for a down-field threat. Where have you gone, Marvin McNutt?

2. Damon Bullock came down to earth. After rushing for 150 yards last week, Bullock carried 22 times for 53 yards (2.4 ypc). The entire Hawkeye ground attack floundered, as Iowa ran 28 times for 68 yards. A line that has three new starters continued to struggle for an Iowa team that lost at home to Iowa State for the first time since 2002. Kirk Ferentz is now 6-8 vs. the Cyclones. The offense, which had only 304 yards vs. Iowa State, has scored one touchdown in two games.

3. Iowa may not be a contender in the Legends. Can this team hang with Michigan State? Nebraska? Michigan? Unless the Hawkeye offense gets on track, Iowa may be in trouble this season. The defense looks to be capable.

1. This offense may be in trouble. The Badgers notched just 206 yards, with only 35 coming on the ground on 23 totes. That?s 1.5 yards per rush for an offense with three new starters up front. This is an attack that has averaged over 40 yards each of the last two seasons.

2. Montee Ball?s Heisman hopes may already be over. The senior ran 15 times for 60 yards. And his streak of 21 games in succession with a touchdown ended. QB Danny O?Brien also struggled, hitting 20-of-39 passes for 171 yards with a touchdown, pick and three sacks, as Wisconsin?s 33-game non-league winning streak ended.

3. The Badgers? two-year reign atop the Big Ten may be in peril. Wisconsin opened with an uninspiring 26-21 victory over FCS Northern Iowa. Now, this: A stunning loss at Oregon State, which is coming off consecutive losing seasons. This was Bret Bielema?s first non-conference loss.