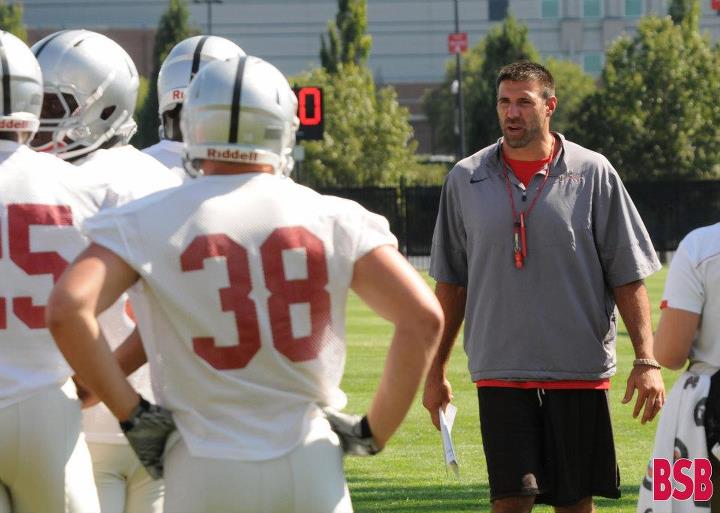 When this photo surfaced earlier this summer, I couldn't help but take a look around Big Ten football camps to see if there was anything similar. I did find this in Iowa City and later this in Ann Arbor, but they're not nearly as old-school. So, unfortunately, there's nothing as epic as Auburn's new practice bottoms. I did notice a few changes from last season, though, and you can see all of them in this post.

ILLINOIS
I've yet to find visual proof of it, but in Tim Beckman's first camp, Illinois players who are rehabbing don purple jerseys, according to Bob Asmussen:

Players who are rehabbing wear a purple jersey, Northwestern color. Yes that is intentional.

Illinois and Northwestern are doing their best to spruce up this rivalry. There was this move, of course, and Illinois recently countered with this.

Also, in Tim Beckman's first camp, freshmen wear a white stripe down the middle of their helmet and are "de-striped" when they are no longer considered a new member of the team. The stripes end up on this whiteboard:

INDIANA
Nothing new to report from Bloomington.

[BTN.com: Read all of our latest Clothes Call posts]

IOWA
Nothing new to report from Iowa City.

MICHIGAN
Year 2 of the Brady Hoke era includes new practice duds. The Wolverines traded in last season's stripes down the side of the jersey and numbers on the sleeves for a trio of stripes on the shoulder and a Block "M" on the sleeves. The stripes start out white and fade to blue on the back of the shoulder of the blue jerseys and go from blue to white on the white jerseys. Michigan also will wear a new alternate uniform in the season-opener vs. Alabama.

MICHIGAN STATE
Nothing new to report from East Lansing.

MINNESOTA
Nothing new to report from Minneapolis.

NEBRASKA
In addition to the new adidas TECHFIT alternate uniform for the Big Ten opener against Wisconsin on Sept. 29, the Huskers also have new practice jerseys. While the old ones were very simple, this year's version, much like Michigan's, has more detail, including a block "N" on both sleeves and three stripes on the shoulders. The stripes start out white and fade to black on the red jerseys and go from red to black on the white jerseys. See more photos of the jersey.

NORTHWESTERN
Northwestern, in its first year with Under Armour, has gone with a simpler look than last year's. As you can see below, gone is the shoulder stripe and the thick stripe down the sides of the jersey. The black jersey, however, still has stripes down the sides. Under Armour also supplied Northwestern with new uniforms.

OHIO STATE
How does Ohio State camp look different now that two-time national champ Urban Meyer is in charge? For one, some of the Buckeyes' lids look a little Oakland Raider-like. Meyer has placed a black stripe on the helmets of all freshmen players.

PENN STATE
This one is more a clarification than a change. With Bill O'Brien mixing up Penn State's iconic uniform, many overacted when they saw the Nittany Lions practicing without the blue stripe down the middle of their helmets. As tight end Garry Gilliam tweeted, Penn State players need to earn the stripe.

We gotta earn our stripes or in this case stripe.

PURDUE
Nothing new to report from West Lafayette.

WISCONSIN
To mix things up, the Badgers recently practiced in their new alternate red helmet, the one reserved for the Big Ten opener at Nebraska. Here's the lid: