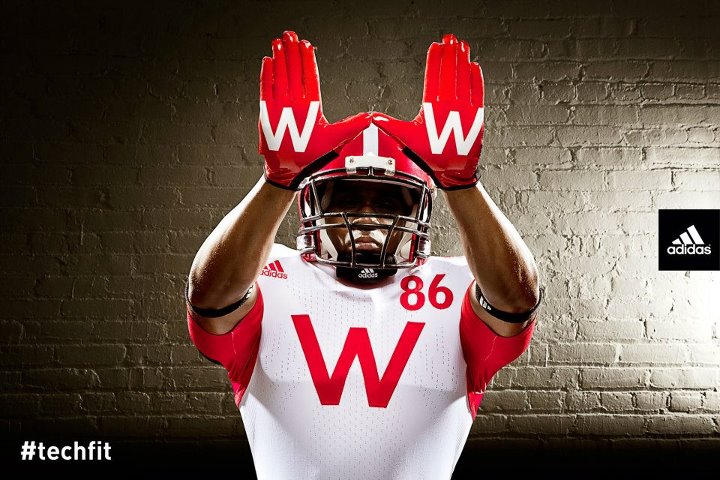 After building up plenty of anticipation during its four-day slow reveal, Wisconsin unveiled its new adidas TECHFIT alternate uniform Monday. The Badgers will wear the new duds in their Big Ten opener Sept. 29 at Nebraska, which also will wear a new adidas alternate uniform. See pictures and videos of the uniform in this post, plus tell us if you like Wisconsin or Nebraska's uni better.

This is a clean look, all things considered. I like how it isn't a drastic change from Wisconsin's traditional road uniform, with the exception of the big "W" on the front of the jersey, the player numbers near the left shoulder and the red helmet. There are minor tweaks, too, but the casual fan will know it's Wisconsin when it sees this uniform. That isn't the case with Nebraska's look, or some other alternate uniforms these days.

Back to the topic of the large "W" – or the "N" in Nebraska's case – on the jersey: I'm in the minority, but I like the old-school varsity sweater look. Another adidas team, Michigan, introduced it in last year's Notre Dame game, and it's a design adidas clearly likes. It reminds me of a hockey sweater, which is kind of cool for a one-time alternate uniform. And, in this case, adidas did well ignoring the Motion "W," a logo that just doesn't cut it.

The gloves are a bit underwhelming, but, seriously, we're talking about gloves. Moving on.

Which adidas alternate uniform is better? Before you vote in the poll below, here?s another look at Nebraska?s uniform.