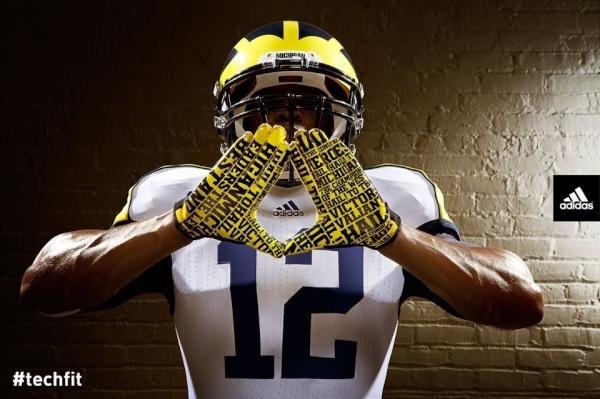 Michigan opens the 2012 football season in grand fashion, playing reigning national champ Alabama at Jerry World in Dallas. To commemorate the highly anticipated game, the Wolverines will don a new alternate uniform, designed by adidas, which the school released Monday night. According to MGoBlue.com, the uniform is a one-time thing, meaning Michigan will wear its traditional home and away uniforms the rest of the regular season. See MGoBlue.com's picture of the uniform in this post.

Not too bad. My favorite part: the release says Michigan worked with adidas and the school's helmet providers to match the colors in the helmet and uniform. That will be a nice change.

It also looks like the helmet will not feature player numbers, something the team added to its classic lid early last season and kept throughout the year. That's another positive, because those numbers are starting to look a lot more neon than maize. Staying on the helmet, I can't say I'm a fan of trading the old-school gray facemask for a blue one.

The coolest feature – at least as far as the players and future recruits are concerned – will be the gloves, which feature the lyrics to the school's fight song, "The Victors." See the gloves for yourself:

"From time to time, whether it's a regular-season or bowl game, our coaches and players enjoy an opportunity to choose an alternate jersey to wear," Dave Brandon said in a release. "The coaches and seniors have worked with adidas to create something special for the season opener in Texas."