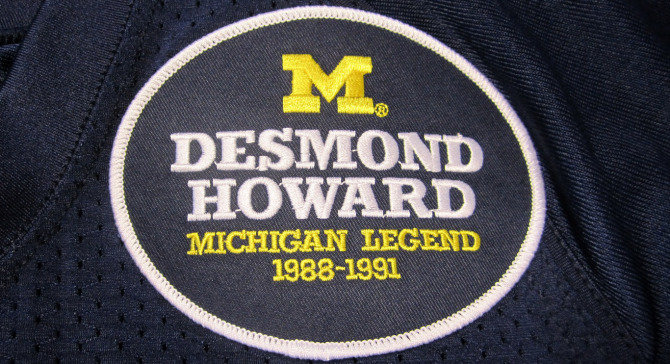 If you're looking for Roy Roundtree on the field next season, you won't find him in his familiar No. 12 jersey. Michigan announced Friday that Roundtree will wear Desmond Howard's No. 21 "Michigan Football Legend" jersey for the 2012 season. The jersey includes a patch on the upper left chest that honors the Michigan legend and Heisman Trophy winner. See a picture of the patch in this post.

Former Michigan receiver Junior Hemingway, who finished his career in grand fashion at last season's Sugar Bowl, was the first Wolverine to wear the uniform after Howard and the first player in program history to receive the designation of "Michigan Football Legend" in 2011.

Roundtree struggled in 2011 after a breakout 2010 campaign, catching only 19 passes — 53 fewer than his sophomore season — and two touchdowns. The senior is expected to bounce back and be a key part of Michigan's passing attack this fall.

In other Michigan jersey news, backup quarterback Devin Gardner, who could see time at receiver, changed to No. 12, Roundtree's old number. He wore No. 7 his first two seasons.

After Roy Roundtree had his number changed to No. 21 yesterday, backup QB Devin Gardner changed his to No. 12.