Illinois to don camouflage jerseys May 6 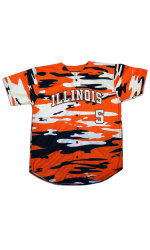 As part of "Honor and Serve Day" on Sunday, May 6, the Illinois baseball team will wear special orange and blue camouflage jerseys in its series finale against Michigan State. The event, according to a FightingIllini.com release, is designed to honor University of Illinois student veterans and all of America?s military heroes, plus to serve the Champaign-Urbana community.

The Fighting Illini Dugout Club donated the jerseys and will auction them off after the game. The club will donate all proceeds from the auction to the Don Moyer Boys and Girls Club.

"We?re extremely excited to have the opportunity to honor a group of people who have put their lives at risk for our freedom,? Illinois head coach Dan Hartleb said in a release.

It's difficult not to like something that honors the military, and this jersey is no exception. It should look good on gameday. Other baseball teams have tried it before, including Big Ten rival Penn State. The San Diego Padres do it quite a bit, as well.