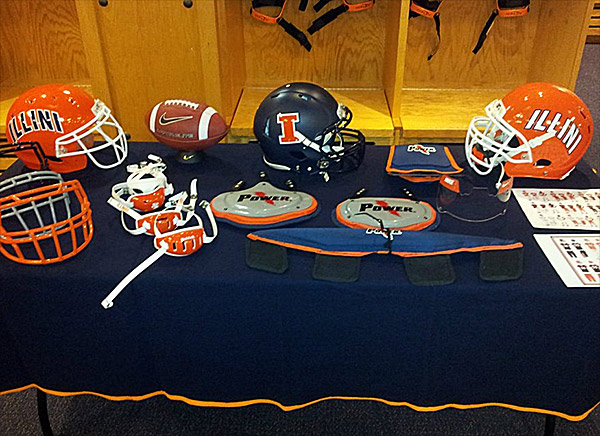 The Illinois football team may have a much different look when it takes the field in 2012. Already with a new head coach, Tim Beckman, the Illini could also have new helmets. According to Illinois SID Derek Neal, the team is displaying three helmets for recruits visiting campus.

Two of the lids are orange and have "ILLINI," not "ILLINOIS" as in years past, and one is in blue letters, outlined in white, and the other white, outlined in blue. A few other differences: The "ILLINI" is arched, there's no stripe down the middle and the font is no longer underlined (see the 2011 helmet). The final helmet is blue with a matte finish and an orange "I."

So, can we expect to see one of these looks when the Illini open the 2012 season?

"While our coaches have been displaying those for recruits, those are just options we've been exploring for new helmets," Neal said. "No decisions have been made yet on helmet, uniform changes, or if there will even be a change."

If there is a change, I really hope Illinois includes the blue matte helmet. It's easily the best of the three. The matte-finish look is great and that "I" really pops.