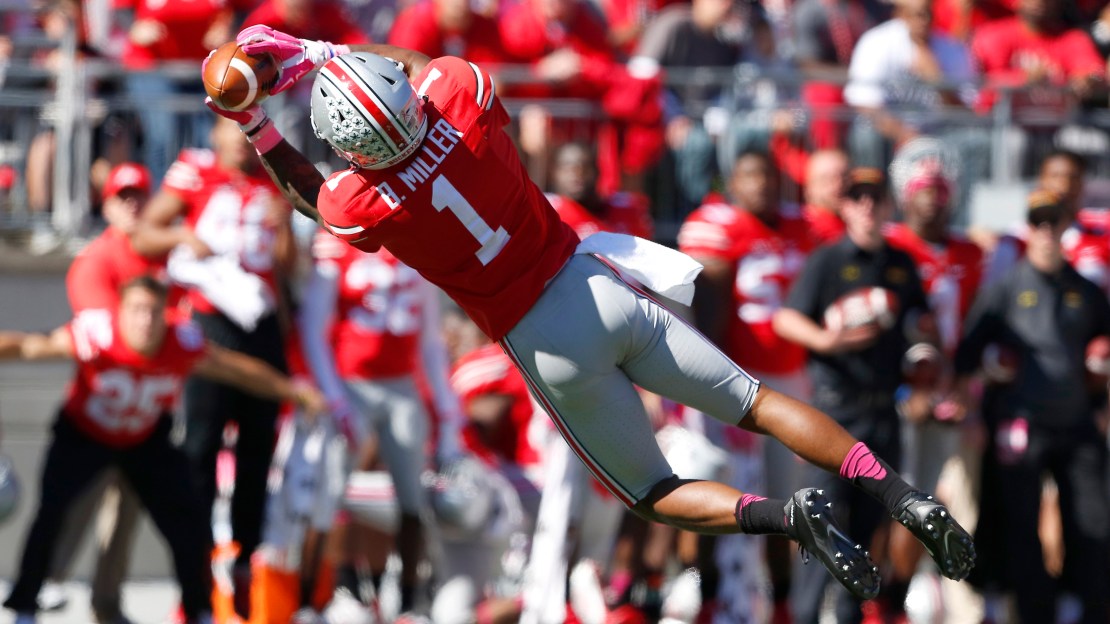 Ohio State remains on top of my latest Big Ten Power Rankings, presented by ArcelorMittal, but it can hear Michigan?s footsteps. Oh, and don?t forget about Michigan State and Iowa, which are lurking.

1. Ohio State (6-0, 2-0). It was good to see Braxton Miller still exists. There can?t be a more exciting player in the galaxy. Now, about those big plays on defense ?
Last week: 1
Up next: vs. Penn State

2. Michigan (5-1, 2-0). The arrival of Jim Harbaugh is a testament to what hiring the right coach can mean to a program. His value to the school and the Big Ten is 100 times more than his salary.
Last week: 2
Up next: vs. Michigan State

3. Michigan State (6-0, 2-0). The Spartans remain perfect after a hard-fought win at Rutgers. Thank you, Connor Cook. Hard to believe, but the Spartans have only outscored Purdue and Rutgers, 52-45, the last two weeks. Now comes the huge game at Michigan.
Last week: 3
Up next: at Michigan

4. Iowa (6-0, 2-0). The Hawkeyes clearly are the team to beat in the Big Ten West. This club has offensive balance and defensive mojo. A win at Northwestern next week means Iowa fans should start looking into hotel rooms in Indianapolis.
Last week: T4
Up next: at Northwestern

5. Northwestern (5-1, 1-1). That trip to Michigan was a cold, massive bucket of reality for the Wildcats. Offense? Defense? Special teams? None of it worked. This week?s visit from Iowa will be fascinating.
Last week: T4
Up next: vs. Iowa

7. Illinois (4-2, 1-1). Yes, the Fighting Illini lost at Iowa, but they were in it late. More proof of the acumen of Bill Cubit, who is smart and respected in addition to being a fine coach.
Last week: 6
Up next: vs. Wisconsin, Oct. 24

8. Minnesota (4-2, 1-1). This staff showed why it?s one of the best in the nation by going to Purdue minus 11 players from the two-deep-and blowing out the Boilermakers. Take a bow.
Last week: 10
Up next: vs. Nebraska

10. Nebraska (2-4, 0-2). Who needs a straightjacket? At this point, all the Cornhuskers can do is laugh about their misfortune. This team is setting a new standard for different ways to lose games.
Last week: 8
Up next: at Minnesota

11. Rutgers (2-3, 0-2). This is a tough and physical team that is capable of winning some game when Leonte Carroo is in the lineup. Kyle Flood is back next week.
Last week: 12
Up next: at Indiana

12. Indiana (4-2, 0-2). Trying to win at Penn State minus your starting quarterback and running back was a tall task. Still, the loss should spark a sense of urgency. That bowl bid that looked like such a sure thing a few weeks ago seems shaky now.
Last week: 9
Up next: vs. Rutgers

14. Purdue (1-5, 0-2). The humiliating loss to short-handed and previously struggling Minnesota casts a pall over this program. How will the Boilermakers respond? It?s gonna tell us a lot.
Last week: 14
Up next: at Wisconsin