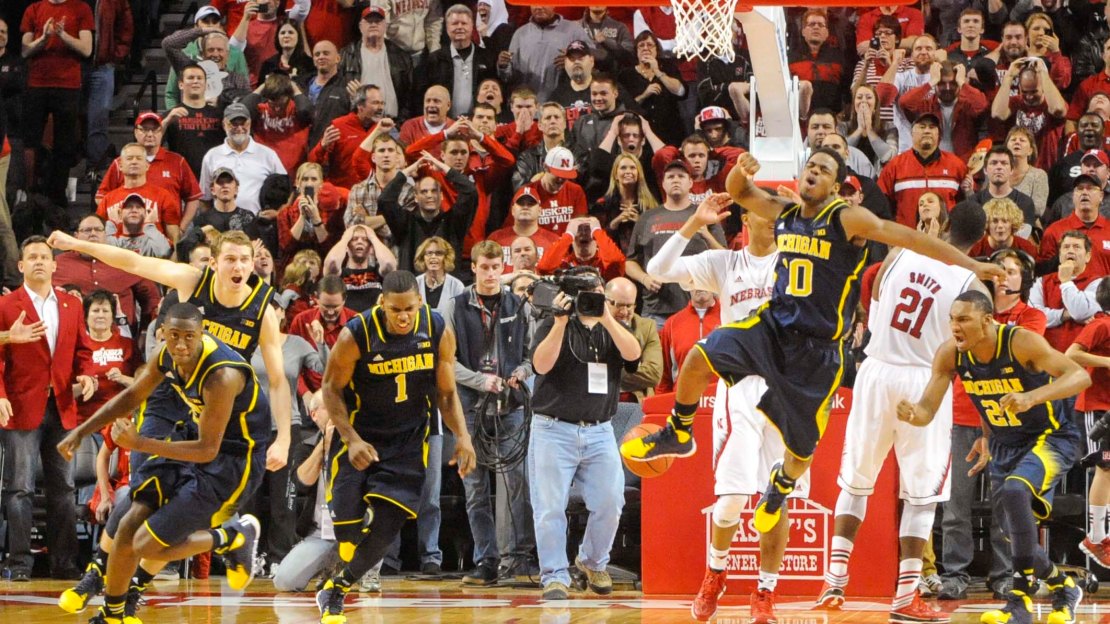 Michigan claimed its first outright Big Ten title since 1986 in Tuesday night's 84-53 victory at Illinois. The Wolverines, who won a share of the 2012 crown, have now been on top of the Big Ten in two of the last three seasons. For fun, I decided to highlight some of the top moments along the way to the outright crown. There are many top moments, but these are the ones that stick out the most. What do you think?

[ MORE: Stauskas comes in at No. 1 in our Big Ten Player of the Year tracker ]

4. Caris LeVert & Stauskas shoot lights out, twice, vs. Michigan State. LeVert and Stauskas were so hot in each of Michigan's wins over Michigan State that they had the bench going crazy much of both games. Check out Andrew Dakich! The final numbers: 27-of-50 (54 percent) from the field, including 14-of-21 from distance (67 percent), and 84 points. The duo also combined for 16 rebounds and 15 assists. Add it all up, and one could say LeVert and Stauskas shot the Wolverines to a sweep over the Spartans.

3. Walton Jr. drives for game-winning layup at Nebraska. At the time, not many people realized how big this shot and the outcome were. Michigan, despite moving to 3-0 with the win, still wasn't considered a true Big Ten title contender. In addition to that, it was a last-second escape against the preseason 12th-place Big Ten team. Well, the Wolverines turned into Big Ten contenders, and Nebraska just so happens to lead the Big Ten with a 7-1 home record. The one loss the result of this drive and layup.

2. Stauskas drains buzzer-beater before halftime to silence Illinois fans. With the outright Big Ten title on the line in the road finale, Stauskas and the rest of the Wolverines picked a great night to be on fire. The Wolverines hit 16-of-23 from downtown – good for an eye-popping 70 percent – and no triple was bigger or more dramatic than Stauskas' NBA range buzzer-beater before halftime. With the home crowd chanting "U-S-A!" in his direction, Stauskas calmly sank the 3 as the buzzer sounded and shot this look at the Orange Krush. Stauskas finished 8-of-11, including 7-of-9 on 3s, in the easy win.

1. Glenn Robinson III beats the buzzer in overtime at Purdue. Michigan would still be trying to grab a share of the Big Ten crown if it weren't for Robinson III's overtime heroics. This play was memorable for so many reasons – overtime, the dangerous inbound pass, the amount of rim the ball got – but none bigger than the fact it came against his dad's old team, in his dad's old gym and with dad sitting courtside.

Derrick Walton Jr. double-doubles in comeback win at Ohio State. Trey Burke didn't do it in his two standout seasons in Ann Arbor. His predecessor, Darius Morris, did it once, when he triple-doubled vs. Iowa. I'm talking about the rare points and rebounds double-double for a Michigan point guard. That's what the freshman Walton Jr. did (13 points, 10 rebounds, six assists) in Michigan's comeback road win at rival Ohio State, the lone meeting of the season.

And before I leave you, a kiss good-bye