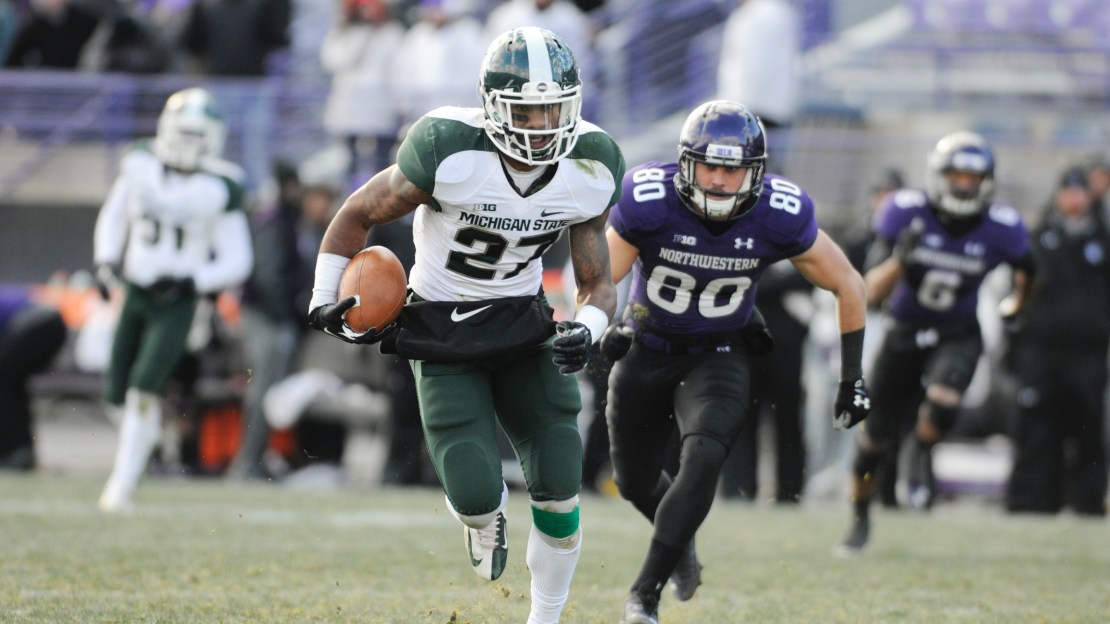 Week 13 brought clarity to the Big Ten season, as Ohio State (Leaders) and Michigan State (Legends) wrapped up division titles and will meet in the Big Ten championship game. We also saw Penn State and Nebraska play an overtime thriller, as well as Illinois end a 20-game Big Ten losing skein. Here is my wrap on Week 13.

Biggest surprise: I?m not shocked Michigan State beat Northwestern. But I am shocked that the Spartans hammered the Wildcats, 30-6. I thought MSU would suffer a bit of a letdown coming off big, emotional victories vs. Michigan State and at Nebraska. Nope. The Spartans dominated in every aspect from start to finish, notching 464 yards and allowing no touchdowns and just 80 yards rushing in clinching the Legends Division for the second time in three years.

Biggest disappointment: Minnesota. I didn?t think the Golden Gophers would win over Wisconsin. But I thought they?d be more competitive. Alas, Minnesota didn?t score an offensive touchdown, as the lone score came on a pick-six. Bottom line: The Badgers had control of this game from start to finish. No way was Minnesota going to out-Wisconsin Wisconsin.

Best play: Backpedalling, Michigan State wideout Bennie Fowler grabbed a pass off a Northwestern defender?s back and sprinted 87 yards for a touchdown in the second quarter. Spectacular.

Play this again: Nebraska 23, Penn State 20 (OT). The Penn State-Nebraska game had it all. A controversial penalty on Nebraska that negated a Cornhusker touchdown. A missed field goal in overtime. A kickoff return for a touchdown. A blocked punt. A missed extra point. A game-winning field goal negated by a penalty. Overtime. Passion. Drama. Whew!

Never play this again: Ohio State, 42, Indiana 14. Let?s be honest: This game basically was over when the Hoosiers stepped off the bus. This was yet another chapter in one of the most lopsided series in the nation. The Buckeyes cruised to a 42-0 edge before Indiana scored two meaningless touchdowns. The loss officially ended the Hoosiers? bowl hopes, as it was IU?s 19th loss in a row to OSU.

Michigan State. The Spartans clinched the Legends Division and are headed to the Big Ten title game for a second time in three seasons. The program is 7-0 in the Big Ten for the first time since 1966. MSU hasn?t been to the Rose Bowl since after the 1987 season.

Ohio State. The Buckeyes keep on rolling, notching a school-record 23rd win in a row. Did the OSU score any style points? Not many, but the win is what matters. Michigan and then the league title game are next!

Illinois hope. The 20-game Big Ten losing streak is dead! And Tim Beckman has his first conference win as Fighting Illini coach with a 20-16 triumph at Purdue.

Connor Cook. The Michigan State quarterback had maybe his best game of the season, hitting 16-of-23 passes for 293 yards and two touchdowns. He?s getting better and better.

Braxton Miller. He was spectacular-again. Miller hit 11-of-17 passes for 160 yards with two touchdowns and a pick. He also ran 13 times for a team-high 144 yards and two scores.

Nathan Scheelhaase. The Illinois quarterback hit 24-of-30 passes for 257 yards with two touchdowns and two picks. He has over 10,000 yards of offense in his career.

Tevaun Smith. The Hawkeyes receiver made five catches for 97 yards (19.4 ypc) and a touchdown.

Josh Ferguson. The Illinois back ran 20 times for a career-high 115 yards and caught four passes. He has been one of the top all-purpose backs in the Big Ten all season.

Iowa bowl prospects. With a win next week at Nebraska, the Hawkeyes could land a New Year?s Day bowl slot.

Carlos Hyde. The big Ohio State back rumbled 18 times for 117 yards and two touchdowns. It was his sixth 100-yard game in a row and he now has 1,064 yards rushing in 2013. That makes him the first Urban Meyer-coached running back to crack the 1,000-yard barrier in his 12 years as a head coach.

James White. The Badger running back carried 26 times for 125 yards and a score. That?s four 100-yard rushing games in a row for White and eight on the season.

Steve Hull. The Illinois wideout made a career-high 10 catches for 169 yards and two touchdowns. It was his third 100-yard receiving game in a row. In the last three games, he has 27 catches for 498 yards with five touchdowns.

Ameer Abdullah. The Nebraska back ran 25 times for 148 yards. It was his 10th 100-yard rushing game of the season.

Zach Zwinak. He eclipsed the 100-yard rushing mark for a third game in a row, running 35 times for 149 yards.

Ryan Shazier. The Ohio State linebacker was credited with 20 tackles, including five for negative yardage with a forced fumble.

Chris Borland. The Wisconsin linebacker recovered two fumbles and forced one to tie the NCAA record for career fumbles caused.

Pat Smith. The Nebraska kicker hit the game-winning field goal from 42 yards in overtime. This came moments after his successful 37-yard field goal was negated by a penalty.

Michigan State defense: Held four of the last five foes without a touchdown.

Michigan offense. In three of the last four games, the Wolverines have been held under 200 yards.

Northwestern. That?s seven losses in a row for the Wildcats, whose bowl hopes officially ended with the loss to Michigan State. It will be the first time since 2007 that the Wildcats won?t be in a bowl.

Purdue. That?s nine losses in a row-with no end in sight.

Tommy Armstrong, Jr. The Nebraska signal-caller hit just 1-of-2 passes for one yard before leaving the game with injury.

Indiana?s bowl hopes: They officially ended with the blowout loss at Ohio State.

Wolverine bowl prospects. With each successive loss, Michigan seemingly is dropping down the bowl pecking order.

Northwestern offense: The Wildcats last TD in regulation was the second quarter at Nebraska. So, Northwestern has gone 10 regulation quarters without scoring a TD.

Purdue offense. It continues to flounder, notching 283 yards vs. an Illinois defense that entered the game ranked 11th in the Big Ten (493.5 ypg).

Sam Ficken. The Penn State kicker missed an extra point early on that proved to be costly. He then missed a field goal in overtime that allowed Nebraska to win the game with a field goal in the extra session.

SNEAK PEEK TO NEXT WEEK

It?s rivalry week. With both division titles wrapped up, just pride will be on the line. And all eyes will be on Ann Arbor, where Ohio State will play Michigan. Iowa is at Nebraska on Friday in a big game for bowl pecking order. Wisconsin must beat visiting Penn State to keep its BCS at-large hopes alive. Northwestern (Illinois) and Purdue (Indiana) look for their first Big Ten wins.