Best of Week 10: Plenty at stake in Michigan vs. MSU 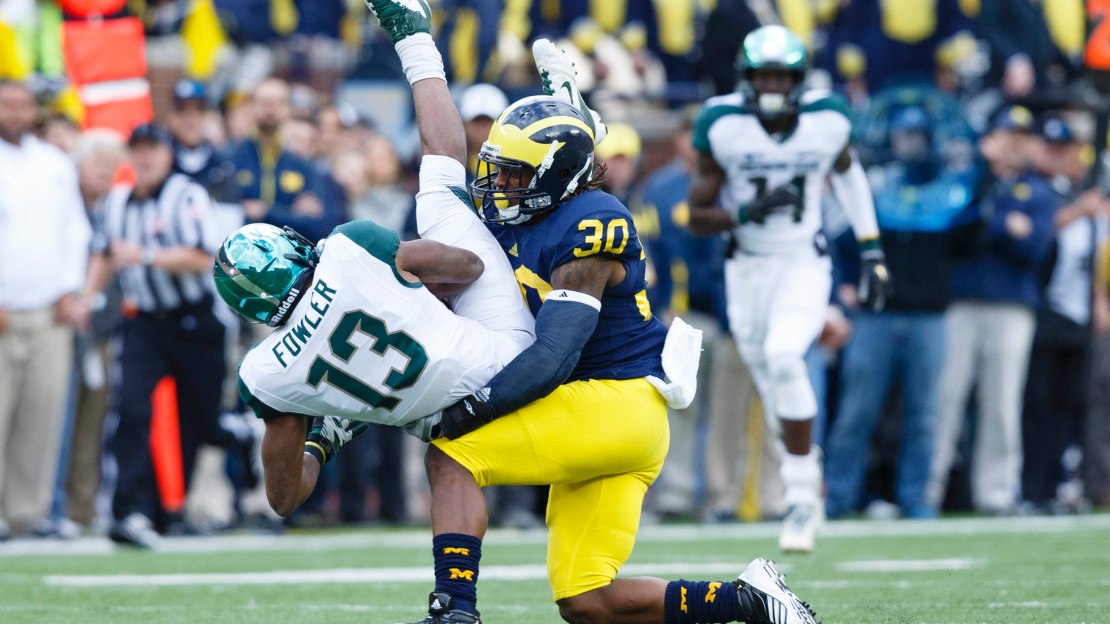 Welcome to the Best of Week 10. And this is a special week after all the ones that came before it. Why? Because every team is in action for the first time since Sept. 14. All eyes will be on East Lansing for Michigan vs. Michigan State, a battle that not only will determine state bragging right but also go a long way toward determining the Legends Division race.

On top of that, be sure to check out out Big Ten predictions for this week and our Week 10 game previews.

BEST GAME: Michigan at Michigan State. Michigan State needs no motivation vs. Michigan. Before losing, 12-10, last year in Ann Arbor, Michigan State had won four in a row in this oh-so-heated rivalry. So, the Spartans know they can beat the Wolverines. Reasserting its power in this series is critical for Michigan State in its quest for a Legends title and return to the Big Ten title game, where MSU landed in 2011. But Michigan wants to begin a run of dominance of its own. Before the Spartans ripped off four wins in succession from 2008-11, the Wolverines won six in a row from 2002-07. Some spicy comments by players this week (Hello, Fitz Toussaint!) have added intrigue to the game.

UPSET ALERT: When the Big Ten went to divisions in 2011, one casualty was the Wisconsin-Iowa rivalry, as each was put in opposite divisions. Well, the rivals will meet for the first time since 2010, when a gutsy fake punt call late helped propel Wisconsin to victory. The Badgers have won three of the last five, but the Hawkeyes have taken six of the last nine.

The Iowa-Wisconsin series is 42-42-2. A win would keep the Hawkeyes in the Legends race conversation. The Badgers have no margin for error in their quest of Ohio State in the Leaders. Iowa is trying to keep pace in the competitive Legends Division; a loss may kill any faint title hopes the Hawkeyes possess.

MUST WIN: If the Hoosiers want to advance to a bowl for the first time since 2007, they probably need to defeat visiting Minnesota.  The Hoosiers are 3-4, needing three more victories to punch their postseason ticket. In addition to the visit by the Gophers, Illinois and Purdue also come to Bloomington-all seemingly winnable games, right? (There also are games at Wisconsin and at Ohio State.)

Well, Minnesota comes in hot, winning at Northwestern and vs. Nebraska. Perhaps enhancing IU?s chances to beat the Gophers is the fact it will be coming off a bye. More reason for Hoosier optimism: The Gophers have won in Bloomington just one time (2005) since prevailing in 1985, going 1-8 at Indiana during the stretch.

QUARTERBACK MATCHUP TO WATCH: It will be fun to watch Northwestern?s Kain Colter take on Nebraska?s Taylor Martinez-if injury doesn?t keep Martinez out. The last time the Wildcats played in Lincoln, Colter came off the bench to replace an injured Dan Persa and promptly led unranked Northwestern to a shocking 28-25 triumph over No. 10 Nebraska. And Northwestern had the Cornhuskers beat last season in Evanston before blowing a 28-16 fourth-quarter lead and falling, 29-28.

Colter has continued to improve as a passer, but he has had to deal with an ankle injury that has kept him out of some action. Martinez can sympathize, as he has dealt with shoulder, toe and now a hip issue. He has missed three games and looked rusty upon his return last week in the loss at Minnesota. Who can make the most plays? But, maybe more to the point: Who is most healthy?

PLAYER ON THE SPOT: It has to be Michigan QB Devin Gardner. He has battled inconsistency all season. The junior?s decision making has been called into question. Gardner also has been hurt by an offensive line that has struggled for consistency on the interior. We know he can make plays with his feet, as the rushing game typically is at its best with Gardner carrying. But Gardner will need to make some big throws to beat this great MSU defense. He looked great the last time out, throwing for 503 yards with Jeremy Gallon notching a Big Ten single-game record 369 yards receiving. But that was vs. Indiana. MSU?s defense is an entirely different animal.

KEEP AN EYE ON: Iowa front seven vs. Wisconsin RB Melvin Gordon. The Hawkeyes defense was ripped last Saturday by Northwestern, allowing 225 yards rushing. Prior to that, Iowa?s front seven had been outstanding.  The Hawkeyes need to be prepped for a Wisconsin attack that?s No.1 in the Big Ten in rushing (296.9 ypg). Gordon is No. 1 in the Big Ten in rushing with 1,012 yards, averaging a cool 9.5 yards per carry. Iowa ranks No. 5 in the conference vs. the run (128.6 ypg) and has yielded a league-low two rushing touchdowns. Wisconsin has 24 rushing scores. Immovable object, meet irresistible force.

BEST COACHING MATCHUP: Michigan?s Brady Hoke vs. Michigan State?s Mark Dantonio. You know one loves beating the other. But, they are civil about it. Dantonio is 4-2 vs. the Wolverines; Hoke is 1-1. Before losing, 12-10, last year in Ann Arbor, Michigan State had won four in a row in this intense rivalry. In-state recruiting gets a bit easier for the winner in this game. Does Hoke?s offense have enough juice to dent the stellar defense of Dantonio?

COORDINATOR MATCHUP TO WATCH: Keep an eye on the strategy between Michigan offensive coordinator Al Borges and Michigan State defensive coordinator Pat Narduzzi, two of the best in the business. Borges needs to get some passing out of Devin Gardner, developing his confidence with some short routes while sprinkling in some designed runs. You know Narduzzi is going to come after Gardner with some blitzing in his vaunted attacking style. If the Wolverines can?t run, they will be in big trouble. I?m guessing Fitz Toussaint will get a chance to play a big role.