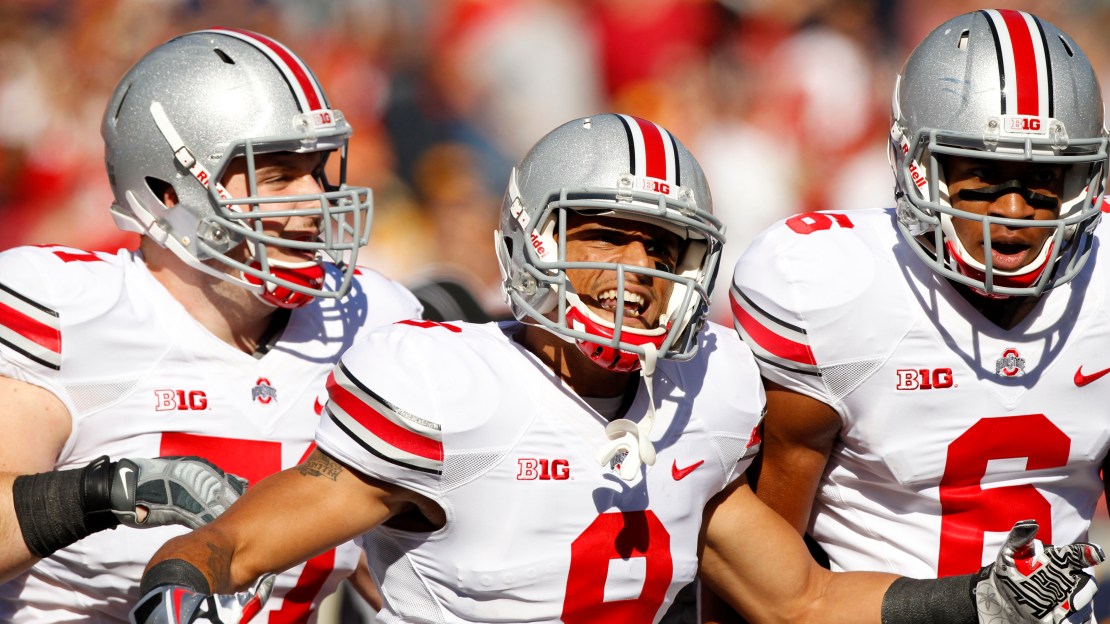 Three weeks are in the books. And this much I know: I don?t know what to make about a lot of teams. My Big Ten power rankings, presented by ArcelorMittal, didn?t suffer a massive shakeup following a strange Saturday. Michigan State and Minnesota are most upwardly mobile; Penn State and Illinois took significant hits. Check it out.

1. Ohio State, 3-0. No Braxton Miller, no problem for the Buckeyes, as Kenny Guiton played the role of ?super sub? again. That?s a national-best 15 wins in a row for Ohio State, whose defense still needs a sharper edge.
Last week: No. 1
Up next: Florida A&M

3. Michigan, 3-0. To say the Wolverines were lucky to beat Akron would be an understatement. No doubt, Brady Hoke will have his team?s attention the rest of the season after this near disaster. This offense has work to do. Oh, and no more pregame donuts for fans.
Last week: No. 2
Up next: at UConn

4. Wisconsin, 2-1. The Badgers are still reeling from a Twilight Zone ending at Arizona State that will have Wisconsin fans buzzing for years. What happened? No time to dwell on it. The Badgers need to improve their passing game if they wanna live large.
Last week: No. 5
Up next: Purdue

5. Nebraska, 2-1. The Huskers? worst nightmare came to fruition, as the defense melted down and the offense disappeared after a fast start. How will Nebraska deal with adversity? This is going to be fascinating.
Last week: No. 4
Up next: South Dakota State

[ MORE: Dienhart: "This was a big step back" for Nebraska ]

6. Michigan State, 3-0. It was good to see the offense come alive-finally. And Connor Cook may be the answer under center. But ripping up FCS Youngstown State is one thing; ripping up Notre Dame is another. This attack can?t go in a shell again.
Last week: No. 8
Up next: at Notre Dame

7. Minnesota, 3-0. The formula for success continues to be a physical run game and solid defense. That has led to a 3-0 start. But at some point, this offense will need some big-play ability in the passing game.
Last week: No. 9
Up next: San Jose State

8. Penn State, 2-1. The defense couldn?t keep up with UCF, allowing 506 yards. No shame there, as this is a good Golden Knights team. On the bright side, Christen Hackenberg had another nice game, hitting 21-of-29 passes for 262 yards with a touchdown.
Last week: No. 6
Up next: Kent State

9. Illinois, 2-1. Another nice effort for the Fighting Illini, but they weren?t ready to beat a team like Washington yet. The offense had just 319 yards and the defense allowed 614. Still, hope floats.
Last week: No. 7
Up next: Bye

10. Iowa, 2-1. Another brick in the wall for a Hawkeye program that needed to beat Iowa State–and did. This program is gaining momentum. Let?s hear it for Mark Weisman, who has rushed 65 times for 324 yards the last two weeks.
Last week: No. 10
Up next: Western Michigan

11. Indiana, 2-1. It looks like Nate Sudfeld is the man at quarterback, as the Hoosiers won a game they likely had to win to keep bowl hopes alive. And the defense allowed only a field goal.
Last week: No. 11
Up next: Missouri

12. Purdue, 1-2.  The Boilermakers played by far their best game of the season. But, alas, it resulted in a loss. Still, Purdue knows it can play and compete with the best after its close loss to the Fighting Irish.
Last week: No. 12
Up next: at Wisconsin