Q&A: Thanks for joining us on the bus, commish! 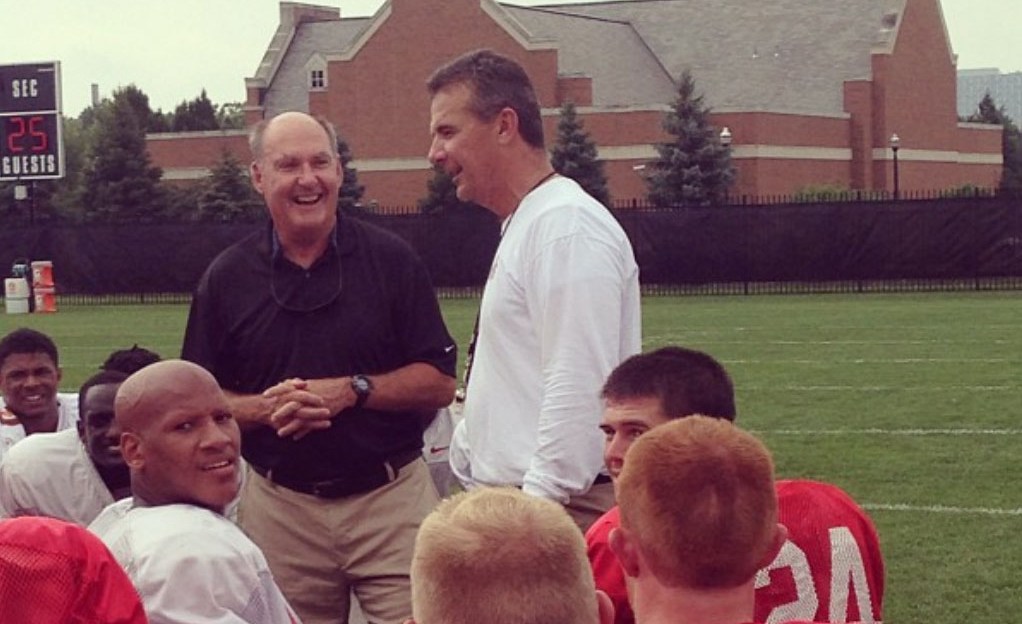 When it comes to traveling, Jim Delany is the best. The Big Ten commissioner hitched a ride on the BTN bus during the first three stops-Indiana, Ohio State and Penn State–of our tour of training camps.

He sat quietly on the back of the bus, surfing his iPad, reading, relaxing. And thinking. I?m sure the most powerful man in college sports is always thinking. It?s one of the things that makes Delany a collegiate icon who has been at the forefront of reshaping and transforming collegiate sports in his 25 years as Big Ten commissioner. His list of accomplishments is lengthy.

Those are just a few of the highlights for Delany, who assumed command of the Big Ten in 1989 after serving as commissioner of the Ohio Valley Conference. I sat in the back of the BTN bus and caught up with Delany to get his thoughts on a variety of subjects after a quarter of a century on the job.

[ RELATED: Get all of our BTN Football Tour coverage ]

Q: Why are you on this tour?
A: I realized it would be my 25th season with the league. This also is the 100th year of the Rose Bowl and this is the last year of the BCS. It just seemed like the stars were aligned. BTN has established this tour, so I decided to hop on the bus for the first three stops of the tour. I go to California next week to meet with the Rose Bowl and return to finish the Big Ten tour.

I also will be spending a lot of time out east the next few years leading up to Rutgers and Maryland coming into the conference (in 2014), so I thought a little TLC for the historic 12 (schools) would be in good order.

Q: When you arrived in 1989, did you envision being with the Big Ten for 25 years?
A: I did not. I envisioned being here for the term of my original agreement, which was five years.

Q: What were some of your initial goals upon arriving?
A: It was to understand the Big Ten. I?m not from the Midwest (Delany is a New Jersey native and graduate of the University of North Carolina where he played basketball), but I knew of the Big Ten and what a great conference it was and about the good institutions it had.

I went on a tour of the league after I took over. Basically, it was a listening and learning tour which was my first objective when I came into the league. I wanted to get to know the conference, meet some people and introduce myself. It doesn?t seem like it was 25 years ago, but it certainly was. Q: At the 25-year mark, you have to be a little bit reflective. What are some of the things you are most proud of accomplishing?
A: Probably the chemistry and culture of the coaches. The way the conference works together, where athletic directors work together, where presidents work together. I think everyone has, generally speaking, had a genuine regard in marrying the athletic and academic experience. We have a wonderful history and tradition.

Q: Has BTN evolved and developed as you envisioned?
A: I think it?s better than anything we could have envisioned. We weren?t sure how tough it would be to get off the ground. It was really tough. But our schools hung together. Our fans hung together. It was their schools and alumni that often were unhappy. They understood that what we were trying to achieve was a big idea. There was a price to pay for it. It?s a very competitive environment whether you were challenging ESPN a little bit or challenging satellite and cable distribution a little bit. But we also knew that if we were successful, we could create a lot momentum for ourselves in a lot of different ways.

I think Mark Silverman?s leadership and talented staff have really grown in a great way, especially early on without having distribution it was difficult. But everyone did their jobs and played through that. Eventually we broke through and got fully distributed. People forget we had both major satellite distributors within 30 days and we were a 30-million home network within 30 days, which never has been done before. We thought we had a great product and stuck with it. Eventually, it developed into a national and international network and still has more growth.

Q: What?s left on your to-do list?
A: I like projects. Basically, I am working with and for the universities. So right now, we are trying to develop our presence in the East, bring two new members in. I have a lot of people who do the basics, blocking and tackling, on a daily basis to run championships and other various areas. What I try to do is stay in front of presidents and athletic directors and when I have an opportunity, the coaches. I tell them what it is we are trying to accomplish. It?s an emotional, passionate and competitive environment, which is good. But you also have to have a sense of direction. I try to provide that and think about that and try to be clear about that.

Right now, it?s about making continued progress in the East, it?s about managing and preparing for our next television negotiation in a couple years and it?s about keeping a sense of newness and excitement for what we are doing. For me, it?s easy because I like projects. I like the people I work with and the conference. I feel really good about it.