Dienhart: Penn State's Ferguson 'may be the guy' 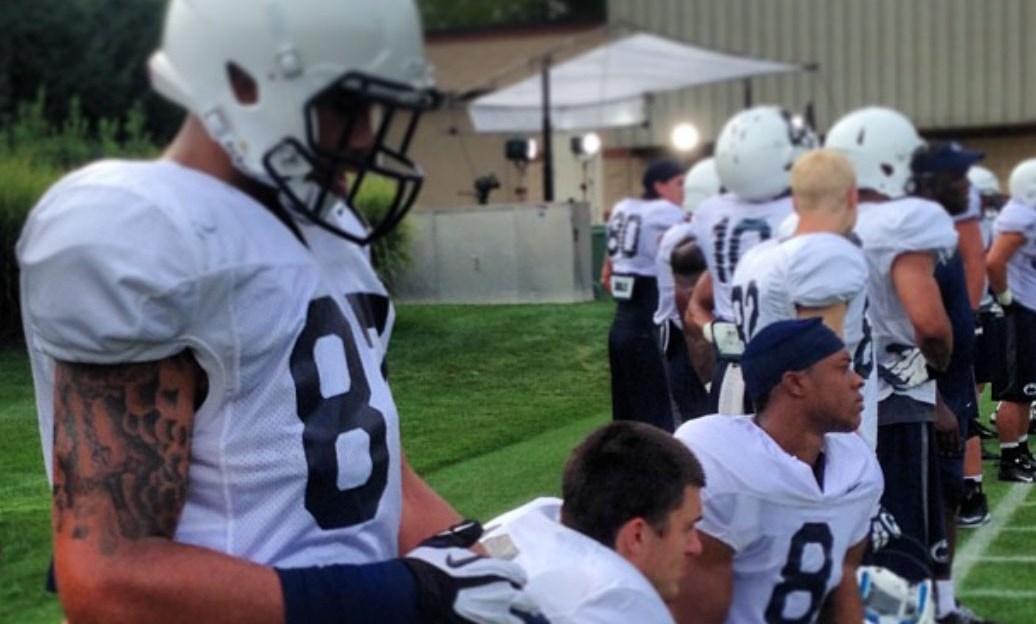 STATE COLLEGE, Pa. – The BTN Football Tour took us to Penn State camp Thursday. My first thought: Bill O?Brien runs a great practice. No doubt who is in charge here, as O?Brien is a commanding presence on the field who is organized and intense. The front-line players are very nice. The depth? Meh.

As defensive coordinator John Butler told me, the team has to stay healthy. There were 105 players on the field this afternoon: 65 scholarship players and 40 walk-ons. That?s all you need to know about the depth issues in State College. The players wore shells with shorts. The staff wanted thumping; but didn?t want players brought to the ground.

All eyes were on the quarterbacks, of course with true freshman Christian Hackenberg and JC transfer Tyler Ferguson battling. I came away more impressed with Ferguson, who throws well and showed a bit more command and presence. Hackenberg?s head may be swimming a bit as he absorbs the offense. I don?t think Bill O?Brien will dumb-down the offense for Hackenberg. But it looks like he has a lot to learn. I?m thinking Ferguson may be the guy who takes the first snap vs. Syracuse in the opener. It?s early. The third-teamer? It?s between Austin Whipple and D.J. Crook.

It?s difficult not to be impressed with coordinator John Butler. First, Butler is an animal on the field, a true coaching dynamo who is destined to be a head coach. They guy is smart and oozes passion. End Deion Barnes looks like a thoroughbred coming off the edge. He?s light in the pants but a jet off the ball who often confounded blockers. Barnes is an outside linebacker at the next level. Butler also has praise for end C.J. Olaniyan on the other side. Fellow end Anthony Zettel also had his moments today. DaQuan Jones and Austin Johnson are blue-collar guys on the inside.

[ TWITTER: Check out our guys' tweets from Penn State practice ]

The linebackers are the biggest worry on defense, believe it or not. Yes, I just typed that about Linebacker U. Butler said it was a blessing in some ways that Nyeem Wartman got hurt last year and had to redshirt. He was able to learn from guys like Michael Mauti and Gerald Hodges. Wartman looks special. Mike Hull and Glenn Carson are the other anchors. Butler says Hull was one of the team?s most productive players last season-a special teams warrior, too. Depth at this spot is very dicey. To combat that, Penn State may play a lot of nickel, since the talent in the secondary is the best on the defense. There has been some scuttlebutt about Adrian Amos playing some linebacker. Butler shot that down and told me it only would happen in a dire situation. Wideout Allen Robinson made a nice one-handed catch today. The guy is a stud coming off a sensational 2012 season when he was Big Ten Receiver of the Year. A guy to watch is redshirt freshman Eugene Lewis, who made a nice grab during a two-minute drill. Lewis is gonna be special.

No team has a better collection of tight ends. There is Kyle Carter, Matt Lehman, Jesse James and freshman Adam Breneman. The most physically impressive of the bunch? It?s James, a 6-7, 257-pound beast who can move and is the best Penn State has and a sure NFL player.

[ INSTAGRAM: View all of our photos from Penn State practice ]

Zach Zwinak, a 1,000-yard rusher last season, was wearing red today as a bum wrist continues to mend, but Akeel Lynch looked good. I liked this kid last year when I visited camp, but he ended up redshirting. Bill Belton also showed some flash.

The secondary is the most talented area of the defense. Adrian Amos and Ryan Keiser lined up with the first team at safety. Jordan Lucas and DeShawn Baker were on the corners.

Sam Ficken looked good. After a rough start last season, he settled down. But Ficken needs to show more range after not hitting a field goal over 40 yards in 2012. His leg had some pop today.