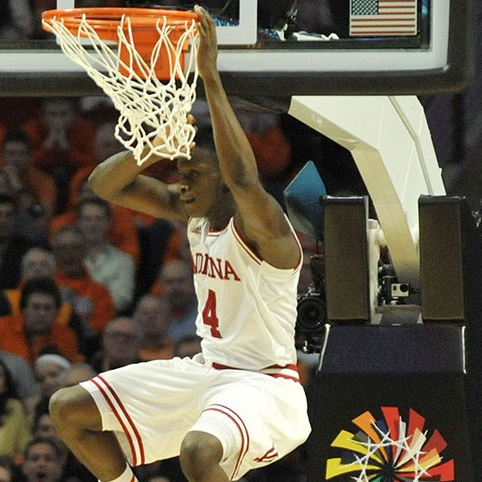 After a bruising and thrilling two days of basketball, the four top-seeded teams advance to Saturday's semifinals of the Big Ten Men's Basketball Tournament. No. 1 seed Indiana faces No. 4 seed Wisconsin, and No. 2 seed Ohio State faces No. 3 seed Michigan State.

On Saturday, BTN airs ?The Big Ten Tip-Off Show? at 1 p.m. ET before the first game, then we air ?The Big Ten Finale? at 6 p.m. ET. Right now let's take a look at both Saturday semifinals, which have plenty of intrigue.

The skinny on Indiana: The Hoosiers have picked up in Chicago where they left off in their regular-season finale win at Michigan that clinched Indiana?s first outright Big Ten championship in 20 years. This is loaded team that features myriad offensive weapons. However, room to operate could be precious vs. the suffocating Wisconsin defenders. But IU isn?t all offense. The Hoosiers? defensive prowess is an underrated reason why they are successful. Led by Victor Oladipo, the Big Ten defensive player of the year, the Hoosiers apply good ball pressure on the perimeter. And Cody Zeller has come a long way as a post defender.

Key number: 5, players Indiana had score in double-figures in their opening win over Illinois. Zeller (24 points); Christian Watford (15); Yogi Ferrell (12); Victor Oladipo (12); Will Sheehey (11). This was Indiana scoring depth at its best. This is an explosive team that can run away from foes with its ?spurtability.? But will the Badgers be able to slow down the hurryin? Hoosiers?

The skinny on Wisconsin: After ending the regular season with consecutive losses, the Badgers have won two games in succession. Wisconsin is coming off a vintage effort in its opening victory over Michigan, playing its classic grinding style to bring Michigan and its fleet arsenal of scorers to a halt. The formula for Wisconsin vs. an Indiana team whose style is similar to Michigan?s will be the same: slow things down, play great defense, don?t foul, limit turnovers. But how will the Badgers deal with IU big man Cody Zeller? That will be key. Zeller had 23 points and 10 rebounds in the first and only meeting between the teams this season.

Key number: 76, the percent of free throws hit by Wisconsin in their win over Michigan in the Badgers? opening game. Wisconsin sunk 16-of-21 free throws, which was remarkable when you consider the Badgers entered the tourney last in the Big Ten in free-throw percentage (63). That sharp shooting must continue vs. Indiana in what figures to be a close game.

The season: Wisconsin will battle Indiana for a spot at playing in the Big Ten championship game. The teams played just once this season, with the Badgers winning in Bloomington, 64-59, vs. the No. 1 team in the nation. Wisconsin has won 11 in a row over Indiana. Tom Crean has yet to beat Badgers boss Bo Ryan, the 2013 Big Ten Coach of the Year. That?s an honor some feel Crean should have won.

The skinny on Ohio State: The Buckeyes came to Chicago as the Big Ten?s hottest team, winning five in a row. And, Ohio State continued to percolate, steamrolling Nebraska in its opening Big Ten tourney game. The Buckeyes? hot streak can be attributed to a more balanced attack. Players like Sam Thompson, LaQuinton Ross and Shannon Scott have stepped up their offensive games as complements to Deshaun Thomas, Aaron Craft and Lenzelle Smith, Jr. They all will need to chip in vs. a tough and physical Michigan State team that plays defense as well as Ohio State.

Key number: 21, bench points for Ohio State in its win over Nebraska. Time and again, the Buckeyes have yearned for balanced scoring, too often relying on Deshaun Thomas to carry a large load. When this team gets big contribution from several players, it?s very good.

The skinny on Michigan State: While Ohio State comes into this game off a 71-50 breather vs. Nebraska, MSU had to rally from a 12-point second-half hole to win, 59-56, over Iowa. Perhaps being battle-tested will benefit the Spartans if this game is close and gritty. No doubt, MSU won?t buckle under adversity. Like the Buckeyes, Michigan State is playing to enhance its NCAA seed in addition to winning the league tourney. But MSU may already be a No. 2-with no shot at being a No. 1. And, OSU likely is a 3 or 4 seed. But, who knows? To beat the Buckeyes, MSU will need to rebound well and dominate inside vs. an Ohio State team that doesn?t matchup well with the Spartans. But most vital for MSU: It has to hit some shots from the outside.

Key number: 19, turnovers Michigan State forced vs. Iowa. That led to 19 points. The Spartans will need to force Ohio State into some errors to get some easy baskets because buckets in the half court figure to be difficult to come by vs. a good Buckeye defensive team.

This season: Ohio State and Michigan State split their two games this season, with each winning on their home court. MSU won in East Lansing, 59-56; the Buckeyes won in Columbus, 68-60.

What?s next: The winner will play the victor of the Indiana-Wisconsin game for the Big Ten tourney title on Sunday.