Big week leads up to big weekend of games 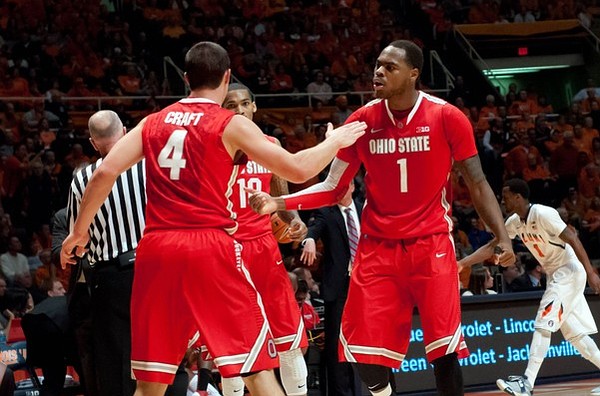 It has been an interesting week in the Big Ten, with the race coming into sharper focus as we hit the halfway point. Here?s what I know: Four schools have separated themselves from the pack, with Michigan, Indiana, Michigan State and Ohio State appearing to be a cuts-above the rest. But don?t count out Minnesota, Wisconsin and Illinois just yet.

By the time this weekend is over, we will have just one team possessing first place following the battle between No. 1 Michigan and No. 3 Indiana. But many big games remain.

Let?s take a look at the week that was and the week ahead in the Big Ten.

THREE STOCKS TO BUY
1. Michigan. What?s not to like about the No. 1 Wolverines? The team is rolling, off to a 20-1 start that is the best in school annals. If the shots are falling, Michigan is the best offensive team in the nation with an array of athletic shoots. The lone question: the interior. After playing at IU, Michigan welcomes Ohio State and goes to Wisconsin and Michigan State.
2. Indiana. Yes, the Hoosiers? bench isn?t as deep as some people would have you believe. Will Sheehey is a force in reserve when his shot is falling, however. But, golly, the starting five for Indiana is very impressive. Christian Watford is the ultimate X-factor for this team. If he comes ready to play, look out.
3. Michigan State. The win over Illinois last night wasn?t a thing of beauty, but it was an exercise in perseverance by the Spartans and showed how gritty this team is. No team is tougher or better coached. Point man Keith Appling is the key. As he goes, so goes Michigan State.

[RELATED: Who are the top five freshman in the Big Ten? Our panel tells you. ]

THREE STOCKS TO SELL
1. Wisconsin. The Badgers have lost three of their last four games. And the one victory was a 45-44 triumph over Minnesota that came on a controversial shot by Traevon Jackson. That seven-game winning streak seems like ages ago. The Badgers need to regain their stroke and get Jared Berggren dialed in.
2. Illinois. The Fighting Illini?s woes continued last night at Michigan State. If you?re scoring in Champaign-and I know you are-that makes Illinois 2-6 in January. Did this team REALLY beat Butler, Gonzaga and Ohio State?
3. Purdue. A 37-point home loss to Indiana-the worst home defeat in school history-was an incident on the Boilermakers? effort, and also shined the light on some talent deficiencies. How will Purdue respond? The game Saturday at Northwestern will tell us a lot, as the Boilers? postseason hopes hang in the balance.

THREE THINGS I LEARNED
1. Victor Oladipo should be considered a legit Big Ten Player of the Year candidate. The versatile Hoosier has the strength to go with energy and toughness. And he?s a smart player who is excelling on both ends of the court, especially as a defender. Oladipo impacts a game on so many levels as the Big Ten?s version of a Swiss army knife.
2. Adreian Payne is the best big man in the Big Ten. Period. End of story. The 6-10 junior has become a dominating force in January, averaging 9.4 points and 6.9 rebounds while also playing good defense. And he has scored in double figures five times in the last six games.
3. Michigan may be OK if Jordan Morgan is out for an extended stretch with an ankle injury suffered at Illinois on Sunday. Jon Horford is looking good coming off a knee injury. And freshman big man Mitch McGary is coming on as a force on each end of the court. The duo looked very good in the dominating win over Northwestern on Wednesday.

THREE IMPRESSIVE WINS
1. Indiana 97, Purdue 60. The Hoosiers? 37-point destruction of the Boilermakers wasn?t even that close. But, it was historic, as it was Purdue?s worse home loss ever. Indiana?s full power of talent and skill was on display in this annihilation-shoot, drive, pass, defense. You name it, the Hoosiers did it with aplomb. What a way to enter the big showdown with Michigan.
2. Indiana 75, Michigan State 70. Victor Oladipo played out of his mind, notching 21 points with seven rebounds, six steals and three blocks. The win knocked the Spartans out of first place and solidified the Hoosiers atop the standing along with Michigan.
3. Michigan 74, Illinois 60. The Wolverines made an emphatic case for No. 1 with a demolition of Illinois on the road in what could have been a dangerous game. Sure enough, Michigan ascended to No. 1 in the AP poll for the first time since November 1992. Trey Burke scored 19, Nik Stauskas tallied 14 points and Glenn Robinson III and Tim Hardaway Jr. added 12 each. This is a team loaded with scoring options.

THREE GAMES TO LOOK FORWARD TO
1. Michigan at Indiana, Saturday. This is it, the clash we all have been waiting for: No. 1 Wolverines vs. No. 3 Hoosiers-a battle for the Big Ten lead and national pecking order. With the way these teams work in transition, expect a high-scoring affair. If the Wolverines are hitting their shots, they are the best offensive team in the nation. But the Hoosiers are playing terrific defense and have a weapon in Cody Zeller that may be difficult for Michigan to counter.
2. Ohio State at Michigan, Tuesday. The Buckeyes won the first meeting, taking a 56-53 decision that to date is lone blemish on Michigan?s resume. So, the Wolverines won?t lack for motivation. And they may still be riding the high of being No. 1 if they escape Indiana with a win on Saturday. Ohio State will have no chance unless Deshaun Thomas gets some scoring help.
3. Minnesota at Michigan State, Wednesday. These teams opened Big Ten play against each other way back on New Year?s Eve-with the Gophers winning in Minneapolis. Another victory over the Spartans could push Minnesota back into the Big Ten title conversation. And it would be a huge boost to their sagging confidence. Expect a physical game with point guards Keith Appling and Andre Hollins likely deciding the contest.