Illinois' Memorial Stadium to get new video board 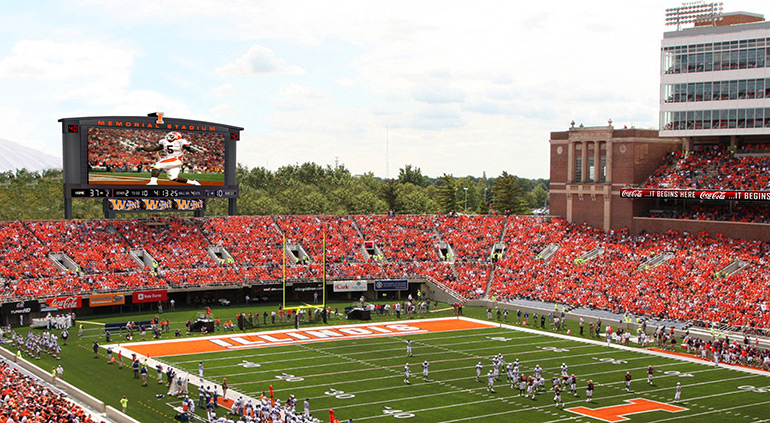 Video boards are the new thing when it comes to updating football stadiums. And the bigger, the better. Illinois is the latest example of this, as it will add a new HD video board above the south end zone in time for the 2013 season.

While it isn't as gaudy as one school has in mind, Memorial Stadium's new electronics, which also include a revamped sound system, are a significant upgrade. In fact, the video display will measure 36 feet tall by 96 feet wide, over four times larger than the previous one.

[ FightingIllini.com: Memorial Stadium to get new Daktronics video display for 2013 ]

The bottom of the video board will include a new 50-foot wide ribbon display that provides the opportunity to showcase sponsors, show up-to-the-minute statistics and inform fans of other game information.

The north end zone will feature an identical scoreboard, albeit without video display. Other additions include: 420-foot LED ribbon displays between the seating decks on the east and west sides of the field, two 10 feet by 17 feet displays on the southeast and southwest corners, and a custom Daktronics Sportsound® audio system.

"The new boards will bring HD quality video to our fans and will greatly enhance the game-day atmosphere," Illinois athletics director Mike Thomas said in a school release." In addition, our video displays and added ribbon boards will now be visible by almost every seat in the stadium and will allow us to provide more statistics, out-of-town scores and event information to everyone in attendance."