Dienhart: Time to wonder 'What if?' with Ohio State 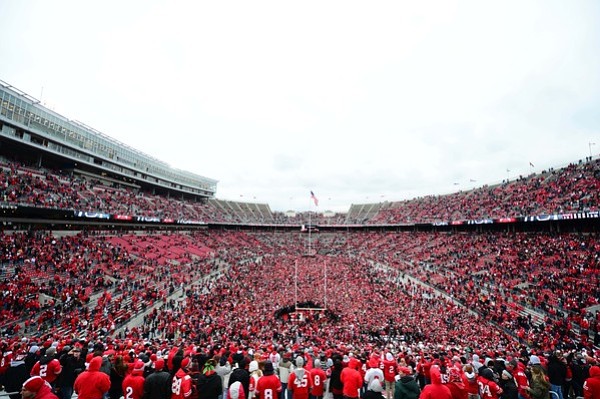 COLUMBUS — The crowd poured onto the field. No one was going to stop the Scarlet and Gray throng from celebrating this Ohio State win over Michigan.

Yes, every victory over the Wolverines-that ?team up North?–is special in these parts. But this one will be savored even more. This one was the seal on top of an unbeaten season. This one capped a season that never will be forgotten at Ohio State.

?Well, to be 12-0, it really hasn?t sunk in,? said Urban Meyer. ?I want to make sure they?re properly recognized as one of the great groups of seniors in the history of this program, however we?re going to do that. Maybe we?ll get 19 bronze statues somewhere, raise some money.?

Cue the laughter. And joy.

Now, we are left to wonder: What if? What if the Buckeyes weren?t on probation as a result of violations incurred under the Jim Tressel regime and thus ineligible to play in the Big Ten championship game or a bowl?

Ohio State athletic director Gene Smith believed the penalties he and school administrators had proposed would be sufficient to appease the NCAA. But when the verdict came down from the NCAA, the Buckeyes were slapped with a bowl ban this season.

?At the time we made the decision, we felt confident that we would not receive the bowl ban,? Smith told the media on Tuesday. ?Obviously, when we received it, we were shocked and devastated.?

Ohio State ranked No. 4 in the most recent AP poll–the only poll they can be ranked in–behind Notre Dame, Alabama and Georgia, respectively. Where would the Buckeyes be in the BCS standings? Most likely not in the top two or even in the top four, as Ohio State?s strength of schedule would figure to hold it back in the various computer polls of the BCS formula.

Could Ohio State beat Notre Dame? I would like the Buckeyes? chances. Yes, the Irish have a tremendous defense, but the Ohio State offense started to click better later in the season as running back Carlos Hyde emerged. And I think the Buckeye defense could stand toe-to-toe with the Fighting Irish offense, which is solid-at best.

Could Ohio State beat Alabama? See above, as the Crimson Tide are built much along the same lines as Notre Dame-great defense; decent offense.

?I?d say at this point in time, Ohio State could go play with anybody in America,? said Meyer. ?I wouldn?t say that five weeks ago. But I think you?ve seen the growth, what we did today and the growth of our defense. ? "

Ohio State had been staring perfection in the eye four other times when facing Michigan in this iconic rivalry, only to see the Wolverines ruin an unbeaten run. Those memories from 1969, 1973 (tie), 1995 and 1996 remain painful to the folks walking up and down High Street. But Ohio State wasn?t going to be denied on this day.

The Buckeyes looked dominating on defense today, especially in the second half. Michigan finished with just 279 yards-and only 60 of them came after halftime.

?It?s hard to win when you turn the ball over four times and don?t convert third-and-short opportunities,? said Michigan coach Brady Hoke. ?We played well enough to win at times, but gave up too many four- and five-yard runs in the end.?

And the Ohio State offense continued to tick along behind the running of Hyde, who has been a monster of late. He had 666 yards in the last six games coming into today. And he finished with 66 hard-fought yards and a score on a day when Braxton Miller was held to minus-three yards rushing. But Miller did hit 11-of-13 passes for 156 yards and a score.

?(Hyde) is developing into one of the best backs in the country,? said Meyer. ?He?s a powerful guy. He?s come a long way.?

While Ohio State will have to be content with finishing the season at 12-0, it has to be pleased with where the program is headed under Meyer. He had a debut season for the ages, laying the foundation for what could be a stunningly successful tenure in Columbus. But the question begs: If Ohio State is the last unbeaten team after the season concludes, should it be ranked No. 1 by the AP, the only poll that ranks OSU?

He wasn?t going to touch that question. But it?s a fair one, especially in a season in which there really isn?t a dominating team.

?You know, I don?t know enough ? ,? said Meyer ?I understand but I?m not going to get into the what-ifs and can?t control what you can?t control. What if we had done this, what if we would have done this. We?re 12-0. I?m going to see to it when you walk into that Woody Hayes facility this team will never be forgotten, because they deserve that.?

The 2013 Buckeyes will welcome back the likes of quarterback Braxton Miller, running back Carlos Hyde, receivers Devin Smith, Corey Brown, Evan Spencer, tight ends Jeff Heuerman and Nick Vannett and four linemen on offense. The defense will have back players like Bradley Roby, Christian Bryant, C.J. Barnett, linebacker Ryan Shazier and linemen Tommy Schutt, Adolphus Washington, Noah Spence and Johnathan Hankins. Of course, a few of those players could turn pro, but they all may want to return for what could be a preseason Top Five team in 2013.

?I?m hoping the guys get that taste and they want to do it again,? said Meyer. ?Because once you taste that, it tastes really good. And the foundation, I think, is strong.?