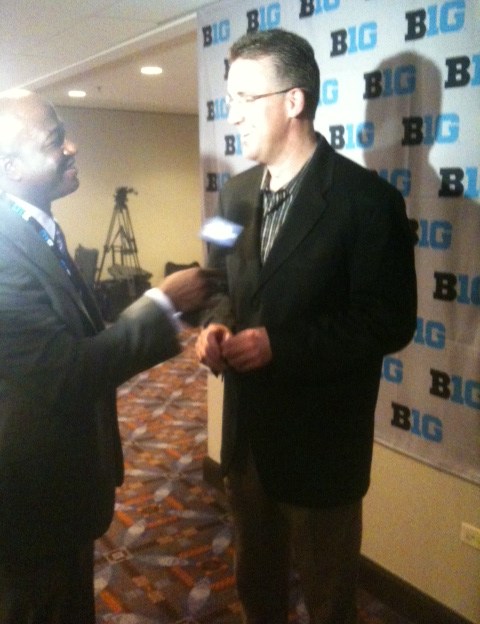 While at Big Ten Basketball Media Day on Thursday, I walked around the mammoth Hyatt Regency O'Hare in search of some nuggets for a Media Day Notebook.See what I came up with from the event that issued more than 300 credentials, a figure Big Ten officials said was "the most in recent memory."

D.J. AS DIRK HUNTER: The "D" in D.J. Byrd stands for David. It'll be Dirk for many people now – at least those who saw the act the Purdue senior put on at Mackey Madness (see video above). There, Byrd opened the festivities pretending to be Dirk Hunter, a fake country artist, and entertained the crowd for a good five minutes before he took off the costume and revealed his No. 21 jersey.

Who came up with the idea? Byrd said Elliot Bloom, Purdue's supervisor of basketball operations, knew he could play guitar and asked him if he wanted to play undercover, do something fun.

"I just kind of came out and wanted to play some songs," Byrd said. "Do that kind of thing. It was funny, because people didn't know who Dirk was or what was going on."

No, they didn't. But, as you can tell from the video, while clearly confused, they played along.

Byrd says he taught himself to play guitar in eighth grade and that he enjoys playing when family and friends gather.

"It just kind of takes your mind off other things, things that aren't going your way," he said.

CUTTING THE CALORIES: One look at Purdue head coach Matt Painter, and it's clear the man has shed weight. In fact, he said he lost 30 pounds since the end of last season. How did he do it? "Here," Painter said pointing to a plate full of grapes in his hand. He added: "I've got a couple more holes in my belt."

HOST OF HOOSIERS: Seeing as how Indiana features the most depth and, arguably, the most talent of any Big Ten team, it wasn't a huge surprise that it brought the largest representation to media day. While a majority of schools brought two, maybe three players, the Hoosiers had four in attendance – Derek Elston, Jordan Hulls, Christian Watford and Cody Zeller.

Now, with all those able bodies in Cream and Crimson, how does Tom Crean plan on divvying up playing time and keeping everyone happy?

"I'm not worried about that," he said.

Right. Win, and the players shouldn't have a problem playing a smaller role.

ZELLER-A-THON: On the topic of the Hoosiers, there was no player more popular Thursday than sophomore sensation and preseason Player of the Year Cody Zeller. The guy had his own table, and it was filled with media almost the entire session. Most players – even Aaron Craft and Deshaun Thomas – shared tables with teammates, and you could find a seat without an extended wait.

Talking to Zeller, one of the best things I heard him say was in reference to Indiana's highly anticipated ACC-Big Ten Challenge game against North Carolina, his older brother Tyler's old team. The question was asked if he thought Tyler would give North Carolina coach Roy Williams a detailed scouting report on his younger brother. Cody's response: "You know what, he might. He really might. He loves North Carolina."

Cody isn't the only Zeller brother enjoying success right now. Tyler is about to start his rookie NBA season, with the Cleveland Cavaliers, and oldest brother Luke made the latest round of cuts with the Phoenix Suns.

GIVE HIM SOME RESPECT: CBSSports.com recently released its top 50 point guards in America, and Penn State's Tim Frazier landed at No. 15. Penn State SID Brian Siegrest took issue, evidenced by this tweet:

He's right. While it's an honor to be included on the list at all, it's tough not to think the name on the front of Frazier's jersey had something to do with the ranking. Put him on, say, Indiana or Michigan State, and he's probably higher on the list. This is a guy who averaged 18.8 points, 4.7 rebounds, 6.2 assists and 2.4 steals per game last season, after all.

"It's fine with me," Frazier said. "Penn State never gets as much publicity. I'm 15, there's nothing wrong with that."

Of course, there isn't. And Frazier's getting respect where it counts, as he was named to the preseason All-Big Ten Team.