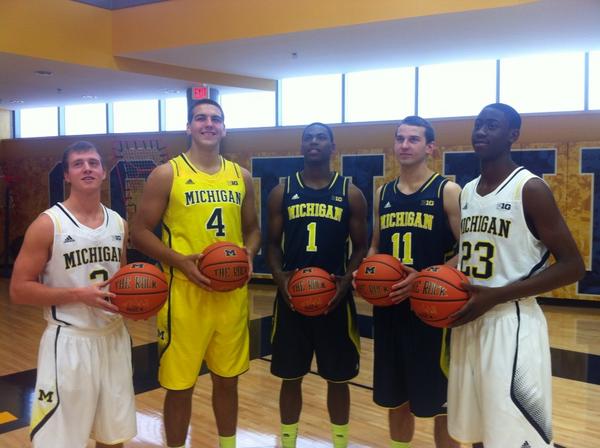 We're just a couple weeks away from the official tip of the 2012-13 college basketball season. With three teams ranked in the top 5 of the preseason Coaches Poll, the Big Ten is expected to be the nation's premier conference. But before the season tips, Clothes Call wanted to take a look at some of the uniform changes Big Ten fans can expect to see this season.

For starters, every Big Ten team's uniform has at least one new wrinkle: The required "B1G" patch on the left shoulder. Some teams have it standing alone, while others have it placed above the American flag patch. The logo also will be on every court.

Four teams feature revamped uniforms: Michigan, Nebraska, Northwestern and Purdue. And Minnesota added a Nike Aerogrphic design to the back of its jersey.

Enough with the introductions, let's take a team-by-team look at the changes:

ILLINOIS
Illinois didn't make any significant changes to its uniform, aside from adding the "B1G" patch above the American flag on the left shoulder. See more pictures of the uniform in this photo gallery.

INDIANA
The Hoosiers' old-school look rarely, if ever, gets touched, and the only change this season will be the required "B1G" patch on the jersey. The clean and classic court also added the "B1G" logo, much to the chagrin of Indiana fans (see comments at bottom of that link).

IOWA
Iowa will look the same this season, with the exception of the "B1G" patch. Also, on Jan. 19, the Hawkeyes may wear a ribbon on their jerseys to commemorate the 20th anniversary of Chris Street's death. According to this story, it's going to look like the one Iowa wore in 1993. Here's a look at it.

MICHIGAN
Michigan will attempt to defend its Big Ten title in new adidas uniforms. The threads feature several changes from what the Wolverines wore last season, including more piping and redesigned shorts. Oh, and there's these highlighter-like shoes. According to Michigan, the team could add a fourth uniform during Big Ten play. The Wolverines already have a rotation that includes white, maize and blue.

MICHIGAN STATE
The Spartans will wear the same uniforms as last season, the only difference being the "B1G" patch above the American flag on the left shoulder. There's also talk that the team may become the first to try Nike Pro Combat uniforms. The football team did it last season. And for the third consecutive season, Michigan State will have a new court design. This is what they played on last year.

MINNESOTA
Like Illinois, Michigan State, Ohio State and Purdue, other B1G teams outfitted by Nike, the back of Minnesota's jersey will feature a Nike Aerographic design. The Gophers' design features The Barn, along with Minnesota's "M" logo and "1851," the year the school was founded. Here's what the back of the jersey used to look like. Williams Arena also has a new scoreboard. Read more about it here.

NEBRASKA
The Huskers will don new uniforms in Year 1 of the Tim Miles regime, and they include a handful of changes from the old look. The biggest difference: Piping. It was added to the front and back of the shoulders, and the stripes are much thicker down the sides of the jersey and on the shorts. Also, the bottom of the collar, which used to be red (home) and black (road), matches the rest of the jersey.

NORTHWESTERN
The Wildcats, who went from adidas (last year's uniform) to Under Armour, naturally have a new look. Unlike the football team, the jersey doesn't feature the Northwestern Stripe across the numbers. Depending on who you ask, that's a good thing or bad thing. The Stripe is represented, as it's placed under both armpits and on the sides of the shorts. See pictures in this photo gallery.

OHIO STATE
The Buckeyes will have the same uniforms as last season, the only difference being the "B1G" patch on the left shoulder. See the uniform in this photo gallery. Ohio State also has new shooting shirts, ones that will feature the 100-year Ohio State logo to commemorate 100 years as a department in the Big Ten.

The football team is celebrating the milestone on its helmet and field.

PENN STATE
The Nittany Lions don't have any significant changes to their uniforms, however they will play on a newly designed court. The floor is a lighter shade this year and it includes the "B1G" logo in the lanes. Here's what the floor used to look like. Penn State also made changes off the court, as the Bryce Jordan Center replaced its lower bowl seating with new dark blue ergo-dynamic seats.

PURDUE
The Boilermakers, in recent years, have made slight adjustments to their look each season. That is the case again in 2012-13, as Nike made a few updates to Purdue's uniform. There's two major changes: 1. The new train logo Aerographic design on back;  and 2. "Purdue" and player numbers are outlined. The "Purdue" used to be all gold and numbers all black. WISCONSIN
The Badgers will look the same as last season. The only difference: The "B1G" patch on the left shoulder. Wisconsin also has a new locker room, which is quite nice.