Power Rankings: Wolverines moving on up 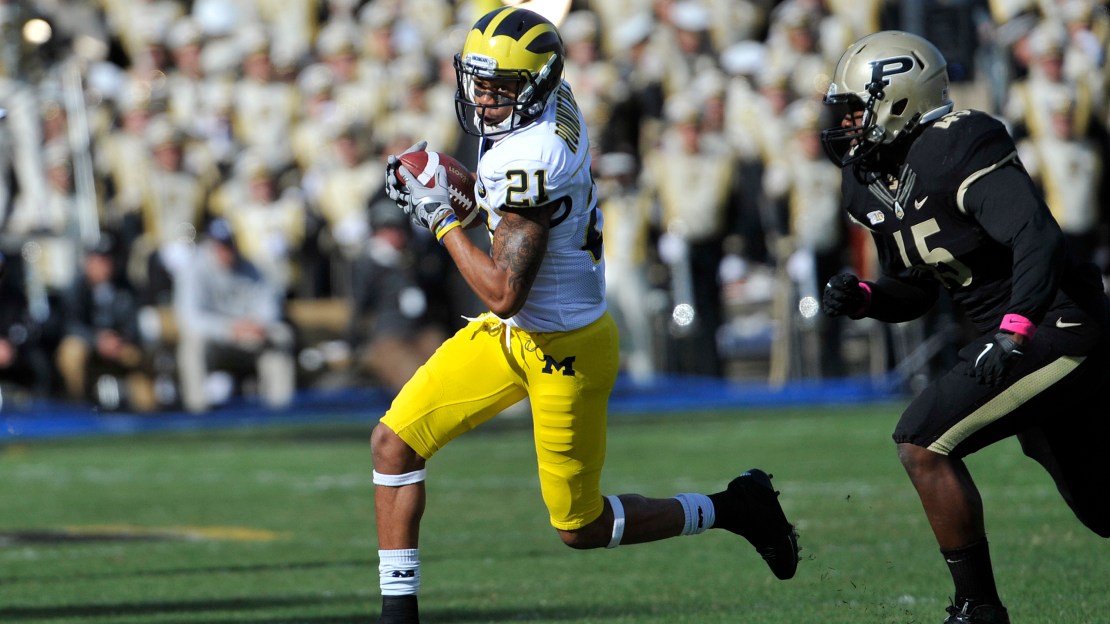 How about them Wolverines? Michigan went into West Lafayette and dominated a pretty good Purdue team Saturday afternoon. The performance was exactly what Michigan needed in its first action since struggling at Notre Dame. But what did the 44-13 victory do for the Wolverines' stock in my latest Power Rankings?

1. Ohio State (6-0, 2-0). After muzzling Michigan State last week on the road with a great defensive effort and then clubbing red-shot Nebraska with an offensive explosion in a 63-38 victory, there is no doubt that the Buckeyes are the best in the Big Ten. Next!
Last week: 1
Up next: at Indiana

[RELATED: Dienhart: "I'm not sure if anyone can beat Ohio State"]

2. Michigan (3-2, 1-0). The 44-13 win at Purdue was the Wolverines way of announcing that they are alive and kicking in the Legends Division. In fact, this looked like the team many felt was the best in the Big Ten back in August. Now, that notion doesn't seem so far off after a slow beginning.
Last week: 5
Up next: Illinois

[RELATED: Dienhart: This is the Michigan we expected]

3. Penn State (4-2, 2-0). Is there a hotter team in the Big Ten not named "Ohio State"? Of course not. The Nittany Lions-39-28 victors over 5-0 Northwestern–have won four in a row and are so close to being 6-0, if not for those narrow defeats to Ohio and Virginia to open the season. Kudos to defensive coordinator Ted Roof, whose unit is excelling
Last week: 6
Up next: Off (at Iowa, Oct. 20)

4. Northwestern (5-1, 1-1). The Wildcats' Cinderella unbeaten ride is over, but Northwestern remains in the thick of the Legends Division hunt. On Saturday, NU just ran into a hotter team than it was lost, 39-28, getting outscored 22-0 in the fourth quarter after having a 28-17 lead.
Last week: 2
Up next: at Minnesota

6. Nebraska (4-2, 1-1). All of that momentum from a three-game winning streak has been effectively snuffed out in a 63-38 loss at Ohio State. And now, the Huskers have two weeks to think about the annihilation. Those questions about the defense after the UCLA debacle? Yes, they are back.
Last week: 3
Up next: Off (at Northwestern on Oct. 20)

[RELATED: How did we do? Week 6 picks revisited]

7. Wisconsin (4-2, 1-1). The Badgers may be turning the corner after a 31-14 win over Illinois, Wisconsin's third triumph in four games. Imagine if the Badgers hadn't blown that 17-point lead at Nebraska or been clipped 10-7 at what we now know is a great Oregon State team. Win at Purdue this week, and the Badgers are Leaders front-runners.
Last week: 9
Up next: at Purdue

8. Minnesota (4-1, 0-1). The Golden Gophers will have had two weeks to think about that ugly loss at Iowa. How will Minnesota look this Saturday with a Northwestern team coming off its first defeat arriving to town? This much is certain: The quicker MarQuis Gray gets back, the better.
Last week: 8
Up next: Northwestern

RELATED: Dienhart: What I learned in Week 6]

9. Iowa (3-2, 1-0). The Hawkeyes had to cool their jets a week after whipping Minnesota, 31-13. The Iowa offense seems to be taking a step forward and could get better when injured running backs Damon Bullock and Greg Garmon round back into form. This team could climb this chart quickly-or not.
Last week: 10
Up next: at Michigan State

10. Purdue (3-2, 0-1). The Michigan tilt was the Boilermakers' big chance to impress ? and they flopped. Badly. The good news: The Leaders Division race remains wide open with yet another big game next week as Wisconsin comes to West Lafayette. It's this simple, really: Win that, and everyone will forget about the 44-13 loss to the Wolverines.
Last week: 7
Up next: Wisconsin

11. Illinois (2-4, 0-2). The 31-14 loss at Wisconsin makes it three lopsided defeats in a row for the Fighting Illini. Illinois needs something good to happen-right now, as not much is going well in any phase of the game. Is it time to panic?
Last week: 11
Up next: at Michigan

12. Indiana (2-3, 0-2). If there ever was "victory in defeat," the Hoosiers experienced it in that painful 31-27 home loss to Michigan State. Lots to build on for the Indiana coaches, who had a great game plan. Now, the Hoosiers need to learn to finish.
Last week: 12
Up next: Ohio State