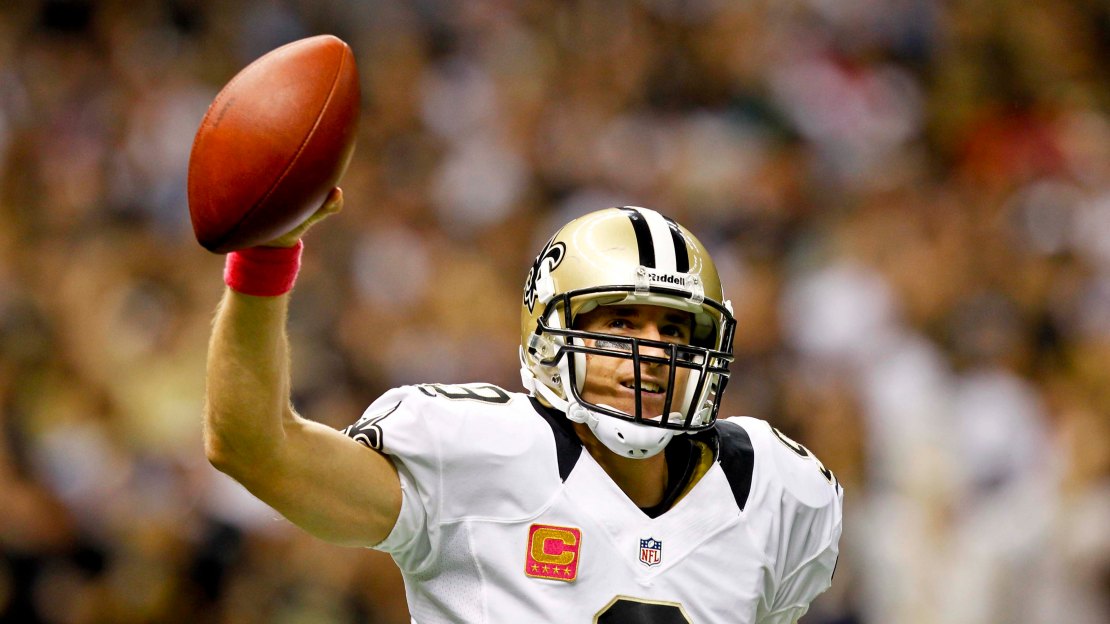 The record-setting performance was extra sweet because it came in a winning effort, New Orleans' first in the opening five weeks. Brees also had one of the better days of his career, completing 29-of-45 passes (64 percent) for 370 yards and four touchdowns.

It's Brees' record, of course, but another former Big Ten quarterback is on his heels. Michigan product Tom Brady threw a touchdown pass Sunday for the 37th consecutive game, making him and Brees the only players ever to get within 10 of Unitas' record that stood for more than a half-century.

As expected, people went to Twitter to congratulate Brees on his record. Here are some of the tweets:

Congrats to @drewbrees & his teammates on breaking Unitas' record. Amazing accomplishment by great QB & leader. We?re proud of you, Drew

Congrats to Drew Brees for breaking Johnny U consec-games-w/-TD record. Many wrote him off b/c of shoulder. Earned record w/ work, toughness

Congrats 2 my guy @drewbrees 4 the new record & also being 1 of the BEST qbs 2 ever play the game!! @BoilerFootball #BOILERLEGEND @nfl

Congrats to you @drewbrees you are a true champion!!!

An amazing record broken by an amazing man. Congratulations @DrewBrees.

I'd like to give a special congratulations to Drew Brees on a remarkable accomplishment.

Brees!!!!!! He did it!!!! Congrats to a great QB and a great career! Manning Favre Elway Montana Marino…..and guess who.. Drew Brees

Thought Johnny Unitas' games with a TD streak was close to unbreakable in the NFL. Congrats to Drew Brees, heck of a record to hold.

And Brees hit Twitter to thank all of his fans:

Great win for the team tonight. Thanks to the Who Dat Nation for making it such a special night. Now let?s get this thing rollin??.