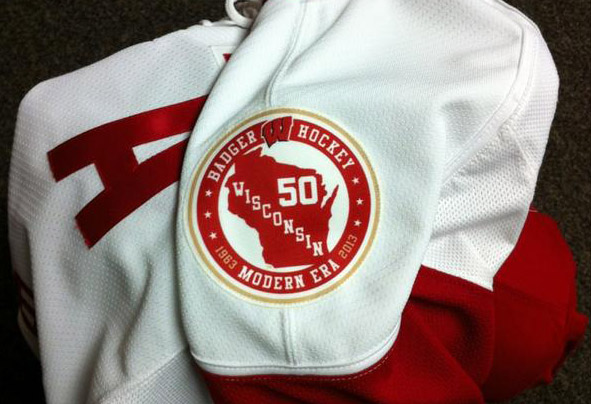 Six national titles. Eleven conference tournament championships. Twelve Frozen Fours. The Wisconsin men's hockey team has had no shortage of success during its existence. To honor its great history and its 50th anniversary season in the modern era, Wisconsin will wear a commemorative patch on the left shoulder of its sweater this upcoming season.

The circular patch features the state of Wisconsin on a white background, with "Wisconsin," written out how it is on the front of the team's iconic sweater, and a "50" on it. The bottom of the patch reads "Modern Era," a phrase that is sandwiched between the team's inaugural year, 1963, and the upcoming campaign, 2013.

There also are three stars on each side of the patch, which one can't help but think is a nod to the team's six national titles. That has not been confirmed, though.