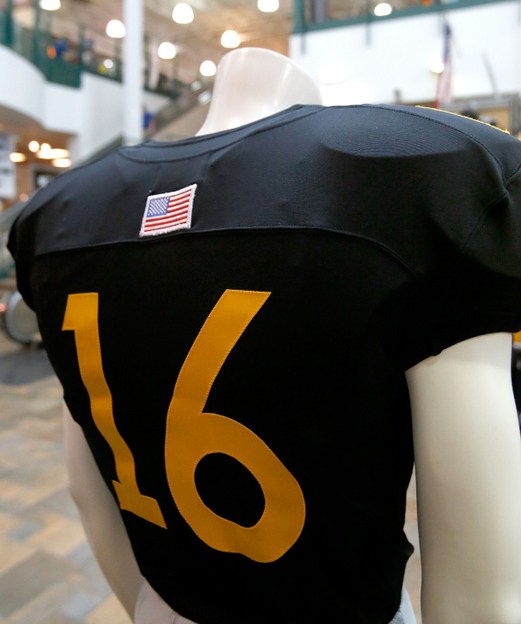 What you see above is the uniform Iowa is rumored to wear Nov. 10 against Purdue. Not so fast, Iowa SID Matt Weitzel warns.

Weitzel, in a reply to an email from BTN.com that included this picture, wrote:

"Not sure that is correct. I?m not 100 percent sure, but I?m thinking they will look different than that."

The photo was taken at Scheels, a local sporting goods store, which happens to be the same place that displayed last week's throwback uniform before the school unveiled the full collection.

Knowing that, let's assume this is the official Nike Pro Combat Uniform. One look at it, you can't help but notice it's part Iowa (jersey) and part not-so-Iowa (pants, cleats). The helmet will fall under the latter category, too, as it's expected to be silver.

Why all the silver? According to Marc Morehouse, the Purdue date is likely to be the school's Veteran?s Day game. Last November, Iowa honored veterans by incorporating the American flag into the logo on one side of its helmet.

Sounds like American flag Tiger Hawk for the helmet. We'll see on that.

That being the case, the jerseys aren't expected to feature player names on the back. Instead, Morehouse reports, players will have the choice of a branch of the U.S. armed forces they want displayed on the nameplates. That's a common practice among the service academies; in fact, Air Force did something similar last week at Michigan.