Did You See This? NU's "Dizzy Bat Race" 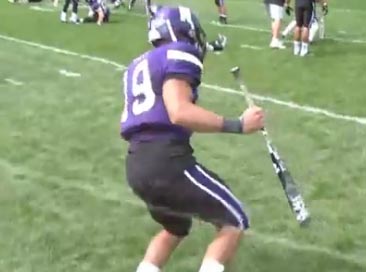 Ever watch something that leaves you feeling dizzy and nauseous? If not, a recent NUFootballFamily YouTube production will do the trick. We know, that's not a very good sell for the video in this post. But believe us, the video is highly entertaining footage. It's called "The Dizzy Bat Race," a Northwestern spring tradition, and as you may have guessed, it involves football players spinning around baseball bats.

But there's a twist, too. The players in the last group of the team building exercise must eat a hot dog. Who doesn't want to scarf down some encased meat after doing revolutions around a baseball bat, right?

All things considered, the Wildcats handled the challenge pretty well. They're used to these kind of tasks, though, as Pat Fitzgerald always seems to find a way to incorporate fun into his practices. This is the same team that has a watermelon eating contest every summer after all.

By the way, if you're looking for quality YouTube videos, NUFootballFamily delivers. The guys always provide viewers with a terrific and entertaining glimpse into the Northwestern football team. For example, there was this Kain Colter feature and this Linemen-JUGS machine piece.