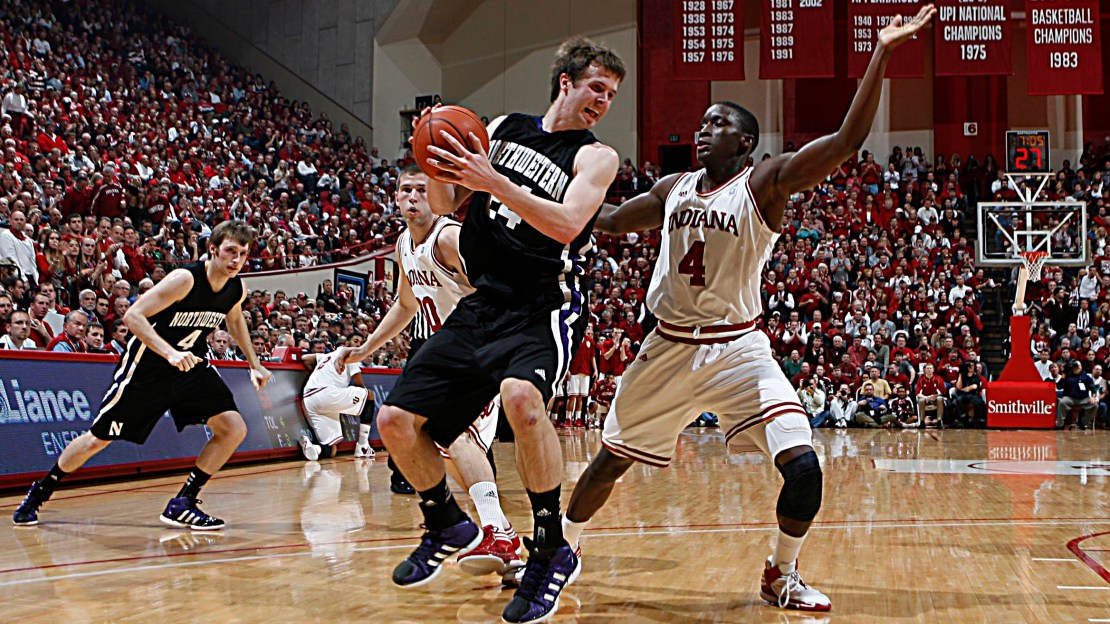 No. 20 Indiana held off Northwestern (recap) and Purdue finished off a sweep of Illinois (recap) in our Big Ten Super Wednesday doubleheader, presented by Buffalo Wild Wings. Catch up on all the action on our BTN.com scoreboard and get stats, recaps and video in this post.

Have you entered for a chance to win a trip for two to the Big Ten men's basketball tournament yet? Don't forget about our Did You See This? archive, either. Also, Gus Johnson was on the call in Champaign, and here are his top calls.

FINAL: Cody Zeller scored 23 points and grabbed seven rebounds to lift No. 20 Indiana to a 71-66 win over Northwestern on Wednesday at Assembly Hall. Verdell Jones III hit a clutch field goal with 4:04 remaining to give Indiana (20-6) the lead. The Hoosiers hit 49 percent of their field goals (27-of-55) and snatched 10 offensive rebounds. The Hoosiers also got double-digit performances from Christian Watford and Victor Oladipo, who each scored 12. John Shurna had 29 points, hauled in three rebounds, and shot 11-of-21 from the field for Northwestern (15-10) in the loss. The Wildcats shot 48 percent from the field (24-of-50). Northwestern also got a double-digit performance from Drew Crawford, who scored 18. Winning the battle on the boards was crucial for Indiana as it grabbed 29 rebounds to 20 for the Wildcats.

HALFTIME:  No. 20 Indiana leads Northwestern, 37-31, at the half thanks to the play of Cody Zeller, who has 13 points on 5-7 shooting. The Hoosiers trailed 21-18 when they broke out for a 10-0 run to overtake the Wildcats and seize a seven-point lead. Indiana had seven offensive rebounds in the first half, leading to second-chance opportunities. The long-distance game has been bottled up for Northwestern, which made 3-of-9 from beyond the arc in the first half, while shooting 73 percent (8-of-11) on two-point shots. John Shurna (13 points) is putting together a nice game so far for the Wildcats.

FINAL: Robbie Hummel scored 19 points and grabbed 11 rebounds to lift Purdue to a 67-62 win over Illinois on Wednesday at Assembly Hall. Purdue (17-9) jumped out to a 13-point lead late in the first, but it nearly threw that advantage away. The Boilermakers were on fire from beyond the arc during the game, shooting 44 percent (7-of-16). Purdue also got double-digit efforts from Terone Johnson, who scored 12 and Jackson and D.J. Byrd, who each scored 13. Meyers Leonard had nine points, pulled down 12 rebounds, and went 4-of-7 from the field for Illinois (16-10). Brandon Paul was 6-of-11 from the floor and chipped in 19 points for the Fighting Illini. More Illinois scoring came from Tracy Abrams (career-high 22) and Joseph Bertrand (12).

HALFTIME:  Robbie Hummel scored 10 points for Purdue as the Boilermakers lead Illinois 36-28 at the half. Hummel and Lewis Jackson are leading the way for the Boilermakers. Hummel grabbed seven rebounds and shot 4-of-4 from the field, while Jackson scored 13 points and shot 6-of-9 from the field. Purdue dominated on the glass in the first half, outrebounding the Fighting Illini 17-11. The Fighting Illini have been effective inside, making 9-of-13 two-point field goals, but they have struggled on the perimeter, shooting 2-for-12 from three-point range. Brandon Paul (12 points) is putting together a nice game so far for Illinois.