Dienhart: Haas injury hurts, but Purdue can still do damage if others step up 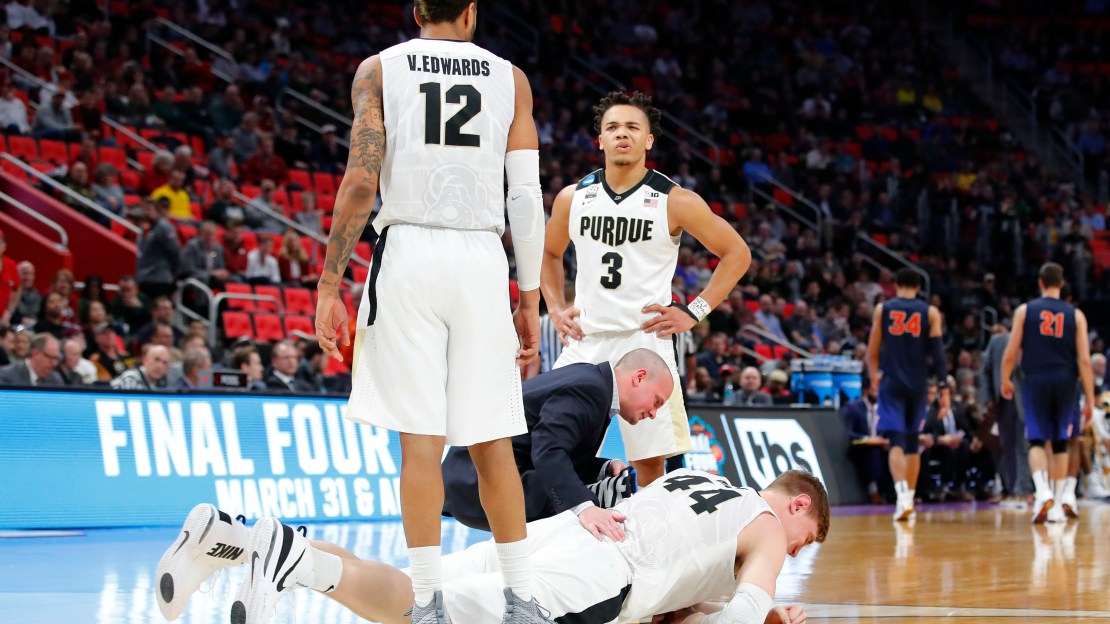 Purdue suffered a big loss today when it was announced senior center Isaac Haas will miss the rest of the season with a fractured elbow suffered in today?s win vs. No. 15 Cal State Fullerton in the opening round of the NCAA tourney.

The injury ends the career of the Boilermaker monolith, one of the best players in school annals and a beloved figure in West Lafayette. And it also severely dampens No. 2 Purdue?s hopes to reach the Final Four for the first time since 1980.

Late in the game with the outcome determined, Haas fell hard to the floor while trying to corral the ball, crashing down on his right elbow. The 7-2, 290-pound Haas writhed in pain on the court before finally rising. He left the game but checked back in soon after before heading to the bench a few minutes later in the Boilermakers? 74-48 win vs. the Titans. Haas had nine points and 10 rebounds. He was averaging 14.9 points and 5.6 rebounds on the season.

Now, he?s gone, having suited up for the final time as a Boilermaker.

The Purdue offense relied on the presence of Haas in the paint, as foes had to respect his commanding presence. When defenses focused on stopping the big man, Purdue?s array of shooters could assault opponents from the 3-point line. Carsen Edwards, Vince Edwards, Dakota Mathias, Ryan Cline, P.J. Thompson are all capable from beyond the arc. Now, the offense has lost its anchor inside.

What?s next for a program looking for its first Elite Eight since 2000?

This team seemed to have it all, like the 2009-10 squad that saw star Robbie Hummel suffer a knee injury late in the season that played a big role in that Purdue team not fulfilling NCAA expectations. The next year with star teammates JaJuan Johnson and E'Twaun Moore back, Hummel hurt his knee again and missed the season, a costly injury that resulted in another season of missed March opportunities.

Tough, tough news for @BoilerBall and Isaac Haas. He has had such a wonderful senior season and has been a tremendous rep for that program. Such a shame for his senior season to end with this type of injury. Purdue will likely pick up the pace without him vs Butler/Ark winner.

This is still a deadly Purdue team that can do damage in March and make a run. Redshirt freshman Matt Haarms will have to play a bigger role. The 7-3 Haarms is a wiry weapon who brings a lot of energy to the court. He is more athletic than Haas, excelling as a shot-blocker and is active around the rim. Haarms will have to grow up quickly in the spotlight.

Everyone else on the 29-6 Boilermaker squad will have to amp put their production, too. And that begins with star sophomore guard Carsen Edwards, who has emerged as one of the Big Ten?s best players. He is Purdue?s most vital cog and is capable of carrying the team. Now is the time for the first-team All-Big Ten talent and All-American to take over.

Senior forward Vince Edwards also will need to play a bigger role. He?s a key player who does a bit of everything well. Vince Edwards has more juice to give. He needs to dig deeper to help cover for his fallen senior teammate.

With Haas out, Purdue becomes more athletic and quicker, which isn?t a bad thing. Haas is heavy-legged, slow and sometimes a liability vs. quick teams. And despite being 7-2, the mechanical and robotic Haas isn?t a terrific rebounder, an area of weakness for this team. Still, his rebounding production must be covered. Maybe Purdue will play at a quicker pace and tempo sans Haas.

An injury like this at such a crucial time may serve as a galvanizing and circle-the-wagons-type of event for this talented team, which will play No. 7 Arkansas or No. 10 Butler on Sunday in the second round. Maybe this will be a unifying event for Purdue, which rallies around the adversity. It will be interesting to find out.