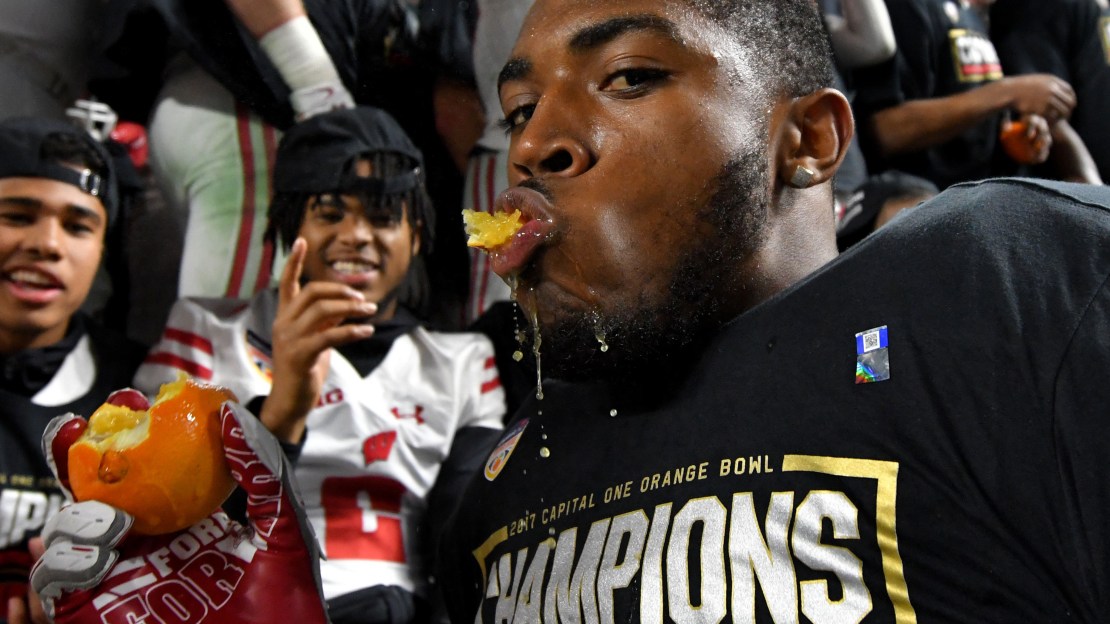 The Big Ten posted a glistening 7-1 mark in bowls. Only an Outback Bowl loss by Michigan on New Year?s Day kept the league from going 8-0. Bottom line: There was a lot to enjoy.

Here is the Best of the Big Ten Bowl Season.

Biggest surprise: Wisconsin. Some wondered about the psyche of the Badgers after they lost the Big Ten title game. Then, Wisconsin had to play Miami and its ?Turnover Chain? in what amounted to a home game in the Orange Bowl for the Hurricanes, a rising darling of college football. The Badgers responded with a suffocating effort to notch the win.

Biggest disappointment: Michigan. The Wolverines had their worst regular season under Jim Harbaugh, bringing an 8-4 mark into an Outback Bowl clash with South Carolina. A win would have been a nice salve. Alas, Michigan blew a 19-3 third quarter lead, melting down the stretch with breakdowns in every phase of the game. It was a disappointing end to a disappointing season.

Play this again: Purdue?s 38-35 win vs. Arizona in the Foster Farms Bowl was filled with thrills. The Boilermakers raced to a 31-14 halftime lead and looked poised for a blowout. But Arizona came to life in the second half and took a 35-31 lead with 3:21 left in the game. But Purdue hit a game-winning 38-yard TD pass with 1:44 remaining to pull back ahead, 38-35. Then, the Boilers iced the game with a pick.

Never play this again: Michigan State?s 42-17 win vs. Washington State lacked drama. It was a major buzz-kill when star Wazzu QB Luke Falk was unable to play because of injury. On top of that, the Cougs didn?t have their top two wideouts. That left a usually potent Washington State offense toothless, as the Spartans built a 35-3 lead in the third quarter and cruised while holding the Cougars to 296 yards.

Best moment: Iowa "First Quarter Wave" at Yankee Stadium. Iowa and Boston College fans ended the first quarter of the Pinstripe Bowl with "The Wave." It was an homage to what Iowa fans at Kinnick Stadium, when they turn and wave to patients at the University of Iowa Stead Family Children's Hospital, a 12-story building across the street. On game days, patients and their families can watch the game and wave back. The Hawkeyes kept the tradition going at Yankee Stadium.

Best play: Purdue pulled off a fun trick play. After taking over at their 32-yard line with 56 seconds left, the Boilermakers appeared to be taking a knee to run out the clock. Running back D.J. Knox crouched behind a guard and Elijah Sindelar then handed the ball to Knox, who waited a second as the linemen stood and then ran around left end for a 30-yard gain that helped set up the field goal at the end of the first half.

Best celebration: Danny Davis and Kendric Pryor turnover chain TD celebration. Following one of Davis' three TD grabs, Pryor placed an imaginary turnover chain around Davis' neck before pretending to snatch it off like Aquib Talib has done to rival Michael Crabtree in the NFL. Speaking of the turnover chain, you saw what Paul Chryst had to say about it on the Wisconsin sideline, right? It's not exactly G-rated, so go ahead and google it.

Best meltdown: Miami coach Mark Richt was flagged for unsportsmanlike conduct after losing his cool while arguing with officials about what looked like a missed holding call on Wisconsin in the Orange Bowl. Richt grabbed an official while pleading his case. Richt should have been ejected.

Mark Richt lost his mind at the end of the first half. pic.twitter.com/CiGLl8ig5D

Did you see this? Nittany Lion catches Jake Browning's incomplete pass. Not only did the mascot haul it in flawlessly, he took full advantage of the moment by celebrating the feat.

Put him in, coach! pic.twitter.com/3KTveffQIf

Did you see this, Part II? In the Music City Bowl between Northwestern and Kentucky, both teams lost key players in a wild second quarter. UK lost RB Benny Snell when he was ejected for making contact with a referee. NU saw star redshirt freshman LB Paddy Fisher get booted for a questionable targeting call.

Iowa: B
Michigan: F
Michigan State: A-
Northwestern: B
Ohio State: B
Penn State: A
Purdue: A-
Wisconsin: A

Best offensive player: Purdue QB Elijah Sindelar. The fact the sophomore hit 33-of-53 passes for 396 yards with four TDs was impressive. And he also engineered the game-winning TD driving in a 38-35 triumph vs. Arizona in the Foster Farms Bowl. But the most impressive aspect of Sindelar?s effort was the fact he did it all with a torn ACL, which he had been playing on since Nov. 11. Have to give a tip of the hat to Penn State's dynamic duo of Saquon Barkley (18 car., 137 yards, 2 TD; 7 rec., 38 yards) and Trace McSorley (32-of-41 passes for 342 yards with two TD), too.

Best defensive player: Ohio State DE Sam Hubbard. He had 2.5 sacks and 3.5 TFLs in helping the Buckeyes limit USC and touted Trojan QB Sam Darnold to seven points in an impressive Cotton Bowl win. The next day, to the surprise of nobody, he declared for the 2018 NFL Draft.

Best special teams player: Michigan?s Quinn Nordin hit four field goals from 35, 26, 45 and 48 yards in an Outback Bowl loss. He was one of the few bright spots for the Wolverines.

7, bowl wins for the Big Ten, its most in any single season; win improvement for Michigan State, its largest jump from one season to the next in program history.

143, career wins at Iowa for Kirk Ferentz, which ties him with Hayden Fry.

4, TD passes for Wisconsin?s Alex Hornibrook, who became just the third Badgers quarterback in the last 15 years to have multiple games with at least four touchdown passes in the same season; field goals for Michigan K Quinn Nordin.

2, Purdue coaches to win a bowl game in their first season, after Jeff Brohm did so vs. Arizona, joining the late Joe Tiller.

100, career wins at Michigan State for Mark Dantonio. Only Duffy Daugherty (109) has more.

13, wins for Wisconsin, its most in a single season in program history.

8, sacks for Ohio State vs. USC, its most since registering 10 vs. Wisconsin in 2007; interceptions for Josh Jackson, tying Desmond King, Lou King and Nile Kinnick for the most in program history.

545, total yards for Penn State vs. Washington, the most the Nittany Lions have ever amassed in a bowl game.

157, yards rushing for Northwestern?s Justin Jackson on 32 carries with two TDs. He finished his career 10th among the NCAA's leading rushers with 5,440 yards.

112, yards rushing for Northwestern?s Jeremy Larkin on nine carries. The redshirt freshman is the heir to Justin Jackson.

283, all-purpose yards for Iowa RB Akrum Wadley. He had 88 yards rushing, 24 yards receiving and 171 yards on kickoff returns in his swan song.