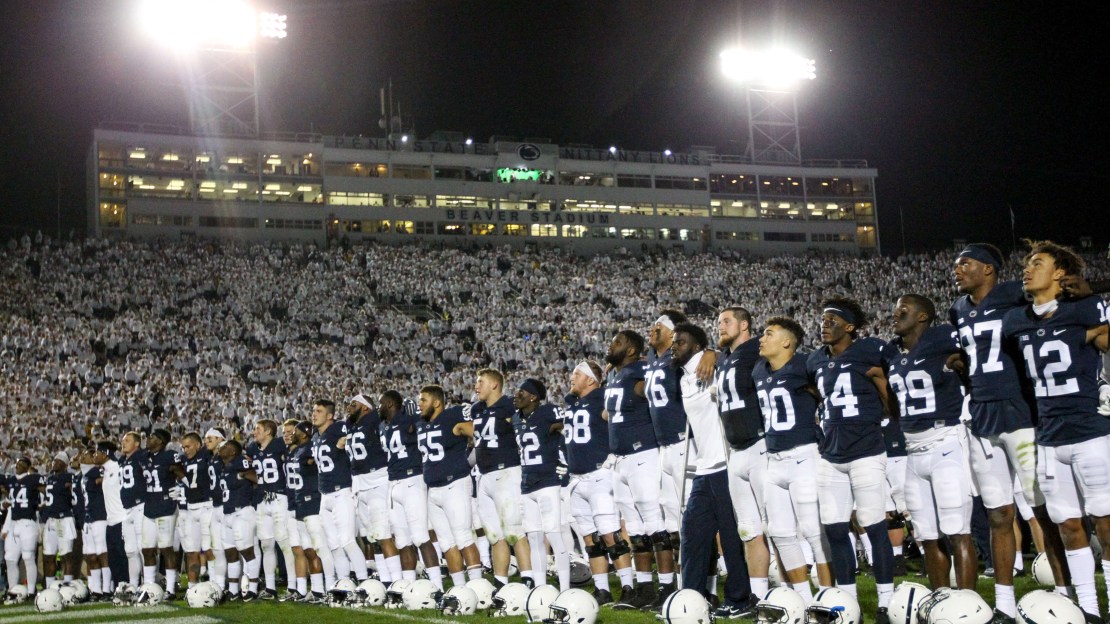 This Saturday was all about Penn State asserting its dominance. But keep an eye on Michigan State, which keeps grinding out wins.

Here is a look at the Best of Week 8.

Biggest surprise: Rutgers was an underdog at home to Purdue. But the Scarlet Knights scratched out a 14-10 win even though they were outgained, 464-217. RU has now won two in a row after breaking a 16-game Big Ten losing skid at Illinois two weeks ago.

Biggest disappointment: Iowa. The Hawkeyes never got traction on offense (312 yards) and lost in OT to Northwestern, 17-10. Iowa is 1-3 in the Big Ten, as its West Division title hopes are drifting further away. Michigan is another option here, after falling 42-13 at No. 2 Penn State.

Play this again: Northwestern's 17-10 OT win vs. Iowa. There aren't a lot of options to choose from, to be honest. While this one wasn't filled with rock 'em, sock 'em moments, there was ending drama, with Pat Fitzgerald and Northwestern playing for overtime in the final minutes before taking the win in the first overtime session.

Never play this again: Michigan State's 17-9 win vs. Indiana. This was a snoozefest. The clubs combined for just 527 yards. The game was tied, 3-3, at halftime. And IU led, 6-3, after three quarters. The first TD wasn't scored until 5:59 was left in the game. Great defenses or middling offenses? Hmmm.

Best play: There were several in Penn State's 42-13 win vs. Michigan. Let's go with Saquon Barkley's sensational bobbling 42-yard reception for a TD in the fourth quarter that gave the Nittany Lions a 35-13 lead. Just add it to his growing Heisman portfolio.

Best moment: Jonathan Celestin pick-6 vs. Illinois. A senior LB, also a team captain, who always wanted to score a touchdown, Celestine finally did it to help seal Minnesota's first Big Ten victory. Even better: It came on homecoming, months after he lost his father. He tweeted about the play being for his dad, and he talked about it here.

Best sight: The image of the White Out at Penn State's Beaver Stadium never ceases to impress. A wall of sound and frenzy of white pom-poms. And this was the largest one yet, coming in at a record 110, 823 fans.

Best tweet: Minnesota great Ernie Wheelwright had a very important question for his girlfriend, and @GopherFootball captured the moment. (She said, "yes,' naturally.)

Did you see this? Penn State fans started chanting "We want Bama!" late in the Nittany Lions' blowout victory vs. No. 19 Michigan. Alabama, of course, is the No. 1 team in the nation, and it's yet to be challenged this season.

Did you see this, Part II? No one does Halloween better than Goldy, and the Minnesota mascot proved it again by wearing a a bevy of costumes Saturday afternoon.

Offensive Player of the Week: Penn State RB Saquon Barkley was sensational vs. Michigan, running 15 times for 108 yards and two TDs and also catching three passes for 53 yards and a TD. He is the Heisman front-runner.

Defensive Player of the Week: Penn State LB Jason Cabinda registered a game-high 13 tackles, including one tackle for a loss, while adding a forced fumble and a sack in Penn State's rout vs. No. 19 Michigan. A couple of other linebackers, Wisconsin's T.J. Edwards (5 tackles and a pick-6) and Michigan State's Joe Bachie (13 tackles, 1 FF), also deserve consideration.

Special Teams Player of the Week: Northwestern P Hunter Niswander. Niswander averaged 50.8 yards on five punts, including an 80-yarder that settled at the 2-yard line, one of three he placed inside the opponent's 20.

Michigan State. It wasn't pretty, but the Spartans won ? again, taking a workmanlike 17-9 triumph vs. pesky Indiana in which they allowed only 253 yards. Don't look now, but MSU is 6-1 overall and 4-0 in the Big Ten.

Penn State. That is 16 regular-season wins in a row for the Nittany Lions. The last team to beat Penn State? It was Michigan, 49-10. This 42-13 triumph vs. the Wolverines was ample payback for PSU, which looks every bit a College Football Playoff team.

Rutgers. Surprise! The Scarlet Knights have won two Big Ten games in a row coming off a 16-game Big Ten losing streak. RU took down Purdue, 14-12, despite being outgained, 474-217, and seeing Purdue get 25 first downs to the Scarlet Knights' 8. Great to see Chris Ash have some success. Did this team really lose to Eastern Michigan earlier this season?

Iowa. The Hawkeyes are staring at the reality of a 1-3 Big Ten record after a 17-10 OT loss at Northwestern. Iowa had just 89 yards rushing. Games with Ohio State and Wisconsin are still on tap, too. Kirk Ferentz won't sleep well.

Maryland. That's three losses in a row for the Terrapins after opening Big Ten play with a win at Minnesota. Bowl dreams may be slipping away, as the Terps are struggling up front on both sides of the ball coming off a 38-13 loss at Wisconsin.

Michigan. The Wolverines Big Ten title hopes are probably toast after a 42-13 loss at Penn State, which ripped the vaunted Don Brown defense for 506 yards. Michigan had just 269 yards and didn't score in the second half. This is a program that hasn't won the conference crown since 2004.

Purdue. The feel-good script being authored in West Lafayette took a turn for the worse with a loss at Rutgers. The Boilermaker offense has scored one touchdown in the last two games. And that came on a miracle one-handed catch in the final minute on Saturday. It was fitting that the offense failed to convert a game-tying two-point conversion after that TD in the 14-12 loss to RU.

47, Minnesota passing yards vs. Illinois, its fewest in any game since 1999.

2, Big Ten wins in a row for Rutgers. It's the first time the program has tallied consecutive Big Ten victories since joining the league in 2014. The Scarlet Knights have beaten Illinois and Purdue. RU is 6-23 in the Big Ten.

42, Saquon Barkley's total touchdowns, which pass Lydell Mitchell for the most from scrimmage in Penn State history.

527, combined yards for Michigan State and Indiana in the Spartans' 17-9 win vs. Indiana, which kicked just three field goals.

74, yards covered in a TD run by Rutgers' Gus Edwards. It was the longest TD run for the program since it joined the Big Ten.

21, true freshmen played by Illinois this season, as QB Cam Thomas became No. 21 on Saturday. Fourteen are starters.