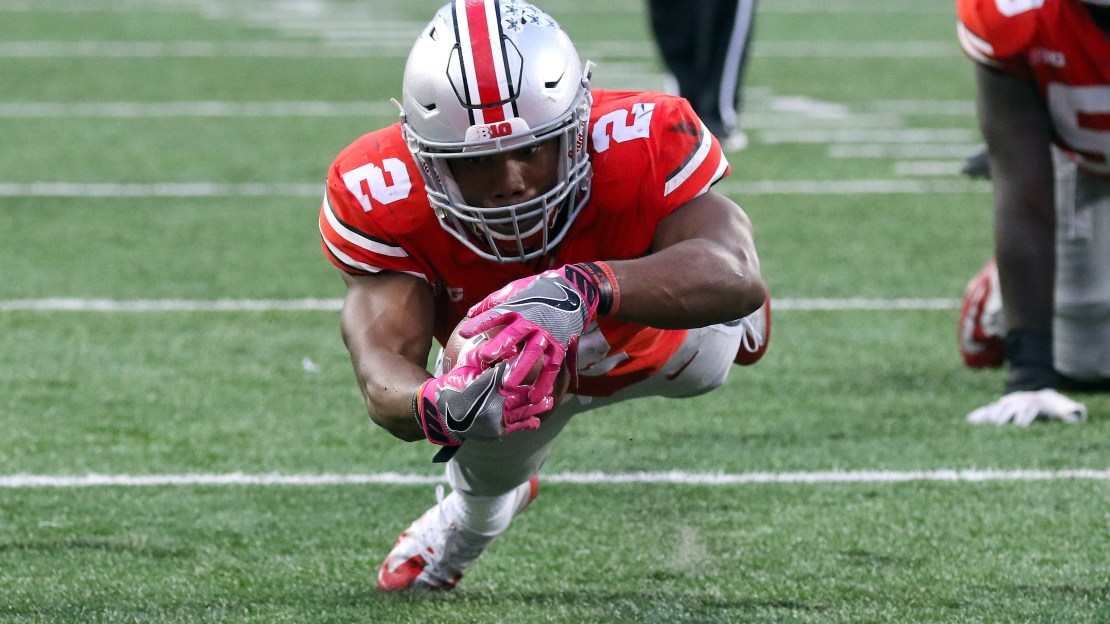 We are almost to the halfway point of the season. Can you believe it? Week 7 offers an interesting array of tilts with just one marquee clash, as all eyes will be on Ohio State's game at Nebraska.

Each team will enter the game off vastly different fortunes. The Buckeyes blasted Maryland, 62-14. While the Cornhuskers fell at home to Wisconsin, 38-17. OSU is thinking Big Ten East/Big Ten title/College Football Playoff. Nebraska? It just wants to make a bowl. This will be the Buckeyes' first trip to Lincoln since 2011, when NU won 34-27. But Ohio State has won the last two vs. Nebraska in dominating fashion, taking a 62-3 decision last year in Columbus and a 63-38 outcome in 2012 in Columbus.

Best game: Ohio State at Nebraska. Since the home loss to Oklahoma, the No. 9 Buckeyes are rolling with four wins in a row. They have scored 50 or more points in each of the last three games, smashing Maryland last week 62-14. The Cornhuskers are hurting after a 38-17 home loss to Wisconsin, losing a chance to show the program was back on track after starting 2-0 in the Big Ten. Now, here is another opportunity on its home field for Nebraska to score a legit win. Know this: The Huskers are 3-20 against Top 10 teams in the last 15 years.

Best head coach matchup: Purdue's Jeff Brohm vs. Wisconsin's Paul Chryst. These are two of the better offensive minds in the conference. Brohm may be the early leader for Big Ten Coach of the Year. Remarkably, he already has raised expectations to the point where a bowl game looks like a very real possibility in his first year after inheriting a program that had won nine games total the previous four seasons. Chryst is one of the most underrated coaches in the nation who may have his best team yet in Madison. Could the Badgers go unbeaten? Perhaps.

Best coordinator clash: Ohio State offensive coordinator Kevin Wilson vs. Nebraska defensive coordinator Bob Diaco. Each was a head coach last year, Wilson at Indiana and Diaco at UConn. Wilson was hired to amp up a Buckeye offense that had lost its big-play ability in the pass game. The offense has roared the last four weeks, scoring 38, 54, 56 and 62 points. And QB J.T. Barrett seems to be growing under his guidance. Diaco's defense was playing well leading into last Saturday, allowing just two offensive touchdowns in the last 14 quarters. Alas, the Badgers had 353 yards rushing vs. NU in a 38-17 triumph. Still, the Huskers have shown potential.

Best QB matchup: Purdue's Elijah Sindelar vs. Wisconsin's Alex Hornibrook. Each sophomore is rolling. Sindelar came off the bench to lead the Boilermakers to a dramatic win vs. Minnesota by engineering the game-winning driving in the final two minutes. Sindelar completed 19-of-26 passes for 248 yards with a TD. Hornibrook hit 9-of-17 passes for 113 yards with a TD in a big win at Nebraska. He continues to improve as the triggerman for a balanced attack that is deadly.

Best matchup: Wisconsin RB Jonathan Taylor vs. Purdue defense. Nothing jumps out, so let's go with the talented true freshman vs. the improved Purdue unit. Taylor has been a freshman sensation, running for 249 yards last week at Nebraska. It was the second time this season he has eclipsed the 200-yard rushing mark. The Boilermakers have a salty defense led by coordinator Nick Holt. Can Purdue slow down Taylor and give it a shot to win in Madison?

Best chance for an upset: Minnesota vs. Michigan State. It wouldn't be a stunner to see the Golden Gophers protect their turf and knock off the Spartans. Minnesota is a desperate team coming off back-to-back losses to open Big Ten play vs. teams they probably thought they could beat in Maryland and Purdue. Can Minnesota afford another home loss if it wants to make a bowl? The Spartans will arrive in Dinkytown as one of the hottest teams in the league, beating Iowa at home and then shocking Michigan in Ann Arbor the last two weeks. Will MSU suffer a letdown? Will the Spartans' pedestrian offense finally catch up to them?

Player on the spot: Nebraska QB Tanner Lee. Look, there is no way the Cornhuskers have a shot vs. Ohio State unless Lee excels. He threw for 262 yards and a TD last week in a home defeat to Wisconsin. But he also tossed his fourth pick-six of the season, and his 10 interceptions rank No. 2 in the nation. Lee needs to protect the ball and make some big plays in the pass game.