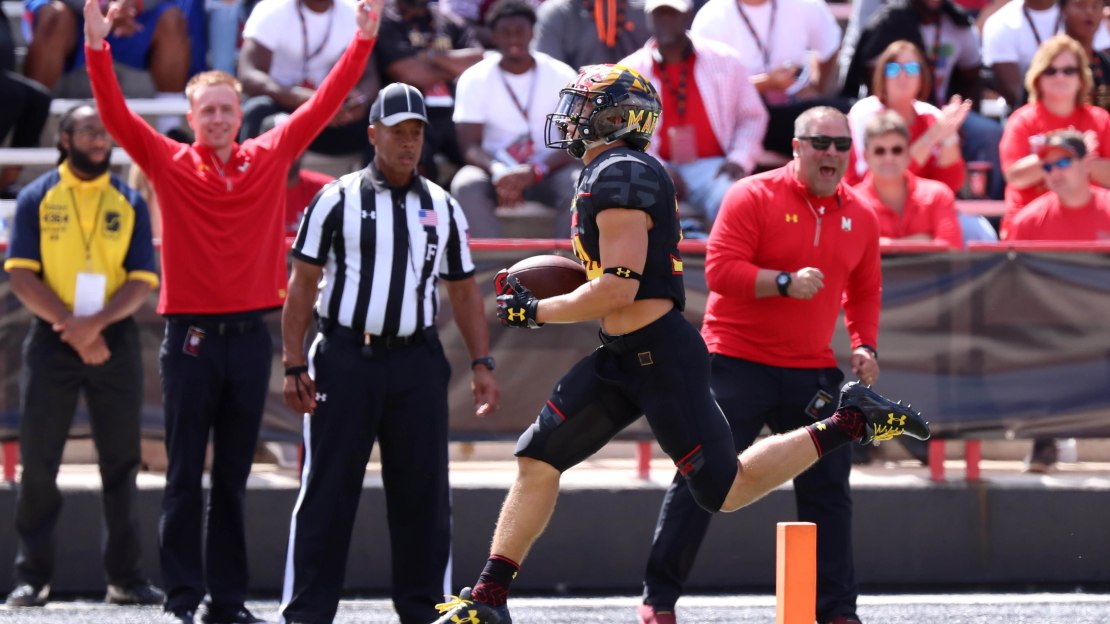 There were some impressive efforts in Week 2. Is Penn State the best team in the Big Ten? I think so. Maryland continues to shine, along with Wisconsin. Illinois and Minnesota are 2-0. How will Ohio State rebound from an ugly home loss to Oklahoma?

Here is the Best of Week 2.

Biggest surprise: Illinois. Few envisioned the Fighting Illini almost pitching a shutout vs. a Western Kentucky club that led the nation in scoring last year. But Illinois built a 20-0 lead before the Hilltoppers scored in the fourth quarter to ruin the shutout. Illinois is 2-0, and feeling good about itself.

Biggest disappointment: Northwestern. The Wildcats were pegged by many as a dark horse in the Big Ten West. But NU got smoked, 41-17, at Duke. This comes on the heels of an uneven start last week when the Wildcats trailed Nevada 20-17 midway through the fourth quarter before rallying to escape in their home opener.

Play this again: Iowa?s 44-41 OT win at Iowa State was breathtaking. Iowa led, 21-10, in the third quarter. Then, Iowa State took a 31-21 lead in the fourth quarter. But the Hawkeyes rallied to force a 38-38 tie after Iowa QB Nate Stanley dumped a pass off to Akrum Wadley, who weaved his way to the end zone from 46 yards. That sent the game to OT, where the Hawkeyes won on a TD after ISU had to settle for a field goal on its first overtime possession.

Never play this again: Rutgers? 16-13 loss at home to Eastern Michigan was ugly. This after the Scarlet Knights showed a spark in a home loss to Washington last week. The Rutgers defense did its job. The offense? RU had just 326 yards of offense. QB Kyle Bolin hit just 17-of-37 passes with two picks.

Best play: Maryland?s D.J. Moore vs. Towson. No shortage of worthy candidates, from Arkum Wadley to Purdue's reverse, flea-flicker, among countless others. Got to go with Moore's highlight scoring run, though, which featured an impressive broken tackle behind the line of scrimmage and several nifty moves en route to a brilliant 21-yard TD jaunt. Moore totaled three TDs in a 63-17 romp.

Best quote: James Franklin. The Penn State coach is famous for preaching one game at a time. Every week, it's all about that opponent, no matter the competition, and no matter who looms the following week. So, that might explain this soundbite.

Did you see this? Western Michigan honored late former Michigan State punter Mike Sadler, who died in August 2016, with a helmet decal for its game at Spartan Stadium.

What a gesture by @WMU_Football to honor @Sadler_3 with these helmets vs @MSU_Football. Class act. Thank you for honoring my friend. ??? pic.twitter.com/jzCO61DoIO

Did you see this, Part II? Following its upset and payback win at No. 2 Ohio State, Oklahoma quarterback and Heisman hopeful Baker Mayfield planted OU's flag at midfield of Ohio Stadium. Well, he tried to plant it.

Co-Offensive Player of the Week: Wisconsin RB Jonathan Taylor. The true freshman was spectacular in a 31-14 win vs. Florida Atlantic, running 26 times for 223 yards and three TDs. Iowa QB Nate Stanley. In his first rivalry game, Stanley torched Iowa State for 333 yards, on 27-of-41 (66 percent), and five touchdowns in an overtime thriller.

Defensive Player of the Week: Penn State S Marcus Allen. He tallied 12 tackles (nine solo) with a TFL, including a highlight-reel safety, in the Nittany Lions' 33-14 win vs. Pitt.

Co-Special Teams Player of the Week: Indiana?s J-Shun Harris. He ran back five punts for 109 yards (21.8 ypr), taking one back 44 yards for a TD in a win at Virginia. Indiana P Haydon Whitehead averaged 43.4 yards on seven punts, four of which he pinned inside the Virginia 20.

Purdue. A week after pushing Louisville to the limit before losing by a TD, the Boilermakers smashed Ohio, 44-21. It?s the first win of the Jeff Brohm era, as he provided a glimpse of the future with an offense that generated 558 yards.

Maryland. The Terps picked up where they left off last week when they downed Texas, ripping FCS Towson, 63-17. In his first start, QB Kasim Hill looked great, hitting 13-of-16 passes for 163 yards and two TDs.

Illinois. Don?t look now, but the Fighting Illini are 2-0 after a 20-7 win vs. Western Kentucky. Hat?s off to the Illinois defense, which sat on a strong Hilltopper offense and allowed just 244 yards.

Minnesota. The Golden Gophers are sitting pretty at 2-0 coming off a 48-14 triumph at Oregon State. The Gophers' 48 points were the most in a road game since they tallied 49 points against Northwestern in 1980. The defense has looked good two weeks in a row. And the offense has had its moments, as RB Shannon Brooks scored three TDs on Saturday night.

Northwestern. The Wildcats got eviscerated at Duke, as NU was whipped on both sides of the ball in a 41-17 loss. The Wildcats run 21 times for only 22 yards, as NU had 191 yards offense while yielding 538. Northwestern accumulated more than 15 yards on only three of its 13 drives. Clayton Thorson was just 11-of-29 passing for 120 yards with two picks.

Ohio State. Another big game, another loss. The Buckeye were outclassed vs. No. 5 Oklahoma, as Ohio State still struggles on offense to pass the ball. Is this a legit national title contender? OU took a 31-16 decision from No. 2 OSU. And it really wasn?t that close.

Rutgers. Eastern Michigan is a MAC doormat who had never beat a Big Ten team. That changed on Saturday, when the Rutgers offense took a step back, notching 326 yards.

Nebraska. After a too-close-for-comfort 43-36 win vs. Arkansas State last week, the Cornhuskers fell at Oregon, 42-35. It took a rally to make it that close, as UO led 42-14 at halftime. The Husker defense continues to struggle, allowing 566 yards. Last week, Nebraska yielded 497 yards.

3, number of 90-yard scoring drives for Iowa at Iowa State; it also had an 89-yard drive to force overtime.

142, rushing yards for Purdue?s Tario Fuller on 16 carries with a TD.

4, number of Wisconsin true freshmen to reach the 200-yard rushing mark in a game, after Jonathan Taylor racked up 223 yards.

127, yards receiving for Minnesota's Tyler Johnson on four catches with a TD. That's 31.8 ypc. Not bad. He has back-to-back 100-yard receiving games.

2, interceptions returned for touchdown for Michigan vs. Cincinnati.

61, yards on Brian Lewerke's touchdown run, the longest by a Michigan State quarterback since 1973.

15.1, yards per carry for Maryland's Ty Johnson after two games.

44-41, The score of both games in the Iowa-Iowa State all-time series that have gone to overtime.

260, total yards for Iowa?s Akrum Wadley. He led the team with 118 yards rushing on 28 carries with a TD and also paced the Hawkeyes with 72 yards receiving on four catches with a game-tying TD grab in the last minute to force OT in a win at Iowa State. Want more? Wadley also had three punt returns for 70 yards.

5, TD passes for Iowa?s Nathan Stanley, who hit 27-of-41 passes for 333 yards. He has eight TD passes and just one pick this season.

3, TDs for Maryland WR D.J. Moore. He made 7 catches for 97 yards with two TDs and made one spectacular 21-yard TD run.

2, Pick Sixes for Michigan, with Tyree Kinnel and Lavert Hill taking interceptions to the house.

36, yards on Trace McSorley's longest run of his career.

107, yards rushing for Nebraska?s Tre Bryant on 20 totes with a TD.