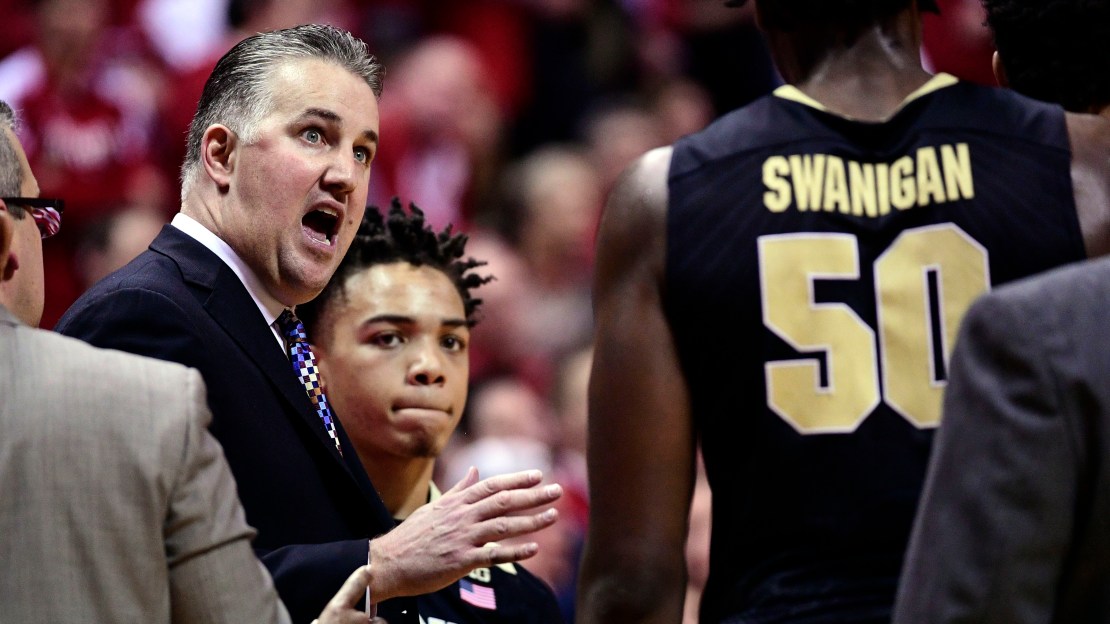 For the third week in a row, there's a different team atop my latest Big Ten Power Rankings, presented by ArcelorMittal.

This week, it's Purdue, winner of of six of seven, claiming the top spot, replacing Wisconsin, which took over for Maryland the week before.

1. Purdue (20-5, 9-3). I'm moving the Boilers up this week, but not because of the incessant complaining I received from the Purdue faithful after last week's list was released. Matt Painter's crew has emerged as the Big Ten team with the highest potential to make a run in the NCAA tournament. Biggie Swanigan certainly has a lot to do with that, but so does the play of Dakota Mathias on both ends.
Last week: 3

2. Wisconsin (21-4, 10-2). The Badgers are sliding to the second spot because of some obvious vulnerabilities on the offensive end. It's good to face those issues now, as I do believe they're correctable. Teams will likely continue to double-team Ethan Happ and force Wisconsin to make jump shots to win games. The Badger personnel is certainly capable, but the sense of urgency has to be there too.
Last week: 1

3. Maryland (21-4, 9-3). The Terps' season may very well be defined by how they play in the next four games. Northwestern, Wisconsin, Minnesota and Iowa are all capable of knocking off the young Terrapins, but Melo Trimble and crew have responded to every challenge this season. This team hasn't lacked in the effort department and the confidence has always been high. Young teams could be dangerous in tournament settings, too.
Last week: 2

4. Northwestern (19-6, 8-4). Winning on the road at Wisconsin was a strong statement and couldn't have come at a better time for Chris Collins and crew. If the Wildcats are able to get Scottie Lindsey back soon, and begin to work him back in the lineup, we'll be reminded once again how good this team could be. Bryant McIntosh has kept his team together on the offensive end, however the team buy-in on defense is what got them the win in Madison.
Last week: 4

5. Michigan State (15-10, 7-5). The Spartans' win against solid Iowa was much-needed, but also a sign of things to come for this young core. Four freshmen scored in double figures and as good as they looked at times, there's still room for improvement. Tom Izzo continues to demand more from this group whose potential is still not yet to be realized. The ceiling is still high, but the consistency of effort and toughness will determine their fate.
Last week: 5

6. Michigan (16-9, 6-6). I've been saying since Day 1 this season that the Wolverines are a much better team when Derrick Walton Jr. is scoring on the offensive end. His aggressiveness makes him a threat to the defense and gives John Beilein's group the spacing it needs on the offensive end. Additionally, the defense has certainly improved. They're not doing anything drastically different; there just seems to be better communication and a commitment to winning the individual battle on the defensive end.
Last week: 9

7. Minnesota (18-7, 6-6). Although they're 6-6 in conference play, the Gophers' RPI (21) and SOS (15) put them comfortably in the NCAA tournament field. This is certainly an NCAA tournament team, but it has some work left to do in the conference if it wants to move up in the standings and find momentum heading into March. After losing five straight, they've responded with two road wins and a tough home win vs. Iowa. They need to continue to improve on offense, and Reggie Lynch has to stay out of foul trouble.
Last week: 8

8. Iowa (14-12, 6-7). I'm not sure I've ever been as excited about my No. 8 team as I am about the Hawkeyes. Michigan State did a terrific job limiting Peter Jok's scoring opportunities, but the depth and potential of this team, with and without Jok, is still extremely high. I'll also say, when Jordan Bohannon shoots it well and plays well, they are a much better team. Much like Derrick Walton Jr. for Michigan, Bohannon's scoring creates better spacing and balance on the offensive end. While they can still make a run and beat anyone in the conference this year, this is a team Hawkeye fans should be excited about for years to come.
Last week: 7

9. Indiana (15-11, 5-8). The Hoosiers have been dealt a number of blows in the injury department that has, in a way, defined their season. The potential of the personnel is still there, although it is simply not the same team that started the season. Expectations in Bloomington are always high, sometimes unrealistically high, and those external demands and expectations seem to be having a negative impact on this roster. Tom Crean told me before their Northwestern game that without James Blackmon Jr. and OG Anunoby, it's going to be a fight to find confidence. Blackmon returned Thursday, but that statement still holds true today. Indiana must start by removing the external distractions and focusing on what the team, the coaches and the staff can control.
Last week: 6

10. Penn State (14-12, 6-7). Pat Chambers and his Nittany Lions continue to impress but seem to go up and down as so many young teams do, especially in the Big Ten. Lamar Stevens and Tony Carr are certainly finding their stride, and the trio of Stevens, Carr and Mike Watkins make the future bright. Defense has continued to be strong, but finding continuity and balance on the offensive end and improving from the 3-point line will be the necessary next step for this dangerous team that is on the cusp of taking a big step forward. Continuing to pick up wins in conference and getting a bye in the Big Ten Tourney make this team even more dangerous to conference foes.
Last week: 11

11. Ohio State (15-11, 5-8). At 5-8 in the conference and 15-11 overall, it surprised me to see Ohio State in the NCAA Tournament conversation. If not for the 0-4 conference start, I would be able to see the logic there, but the Buckeyes still have a lot of ground to make up in the conference to get to where they need to be. Trevor Thompson and Jae'Sean Tate have been the tone-setters for this team and when they are both effective, this is a very good team. Consistency of effort has been the story-line that has defined their struggles. I hope the Buckeyes find a sense of urgency as the season comes to an end.
Last week: 10

12. Nebraska (10-14, 4-8). If you look at the wins over Indiana, Maryland and Purdue, you'd think this was a team competing for the Big Ten title. But at 10-14 overall and 4-8 in the Big Ten, I can't move the Huskers any higher. I simply cannot use the "You are who you beat" logic for this team. They clearly compete and there are a lot of things to like about this team, but those positives have to translate to a winning record for them to take that big step forward and be taken seriously outside of the conference. Trust me, conference opponents certainly take the Huskers seriously. The backcourt potential is certainly there with Tai Webster and Glynn Watson but consistent balance seems to be an issue.
Last week: 12

13. Illinois (14-12, 4-9). Chemistry continues to appear to be the issue as the Illini have a number of players with a lot of experience. As I've said all season, though, they just don't seem to be able to get it together to win games that they should be winning in the conference. Their season can be defined by their opponent's in-game runs. The Illini have been in most games, but allowing a run at any moment of the game seems to be what has taken wins away from John Groce and crew.
Last week: 13

14. Rutgers (13-13, 2-11). Don't let the placement, the conference record and the standings fool you: The Scarlet Knights are a much-improved team. They defend, they've got strong guard play and good length and depth down low. I'm certain that with a full off-season of workouts, conditioning and individual work, this team will shock a lot of Big Ten fans next season. Steve Pikiell and staff have done a terrific job in Year 1.
Last week: 14