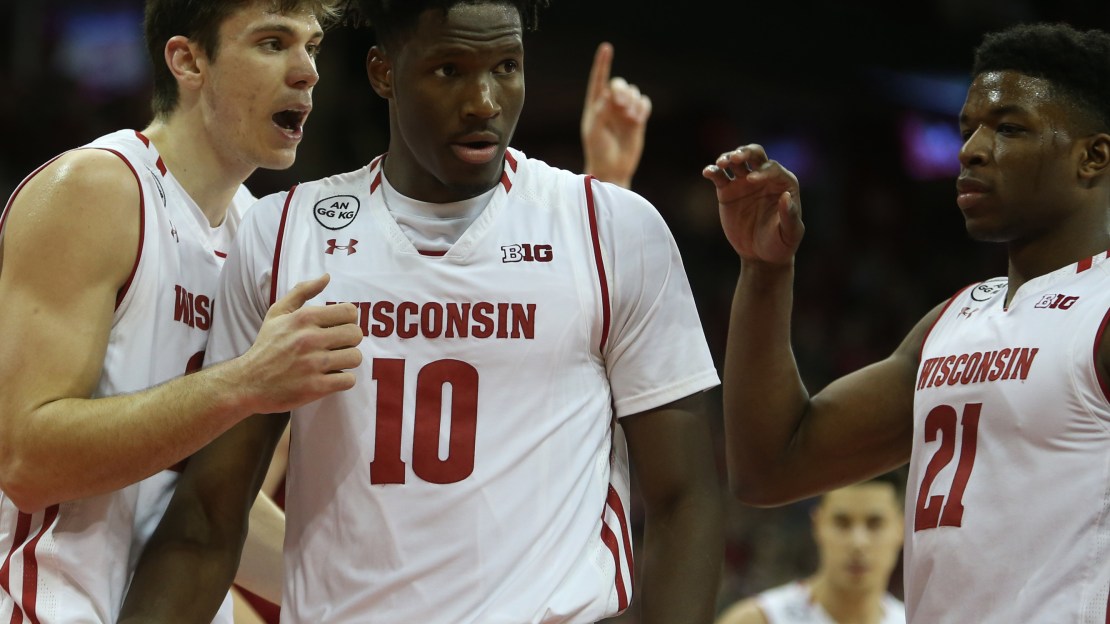 That was quick. One week after falling to No. 2 in last week's Big Ten Power Rankings, presented by ArcelorMittal, Wisconsin is back on top.

1. Wisconsin (20-3, 9-1). The play of Ethan Happ has been remarkable in every way. He is truly impacting the game in every possible way and has emerged as the centerpiece of the Badgers' offense. The challenge will come as teams continue to double down on the post (Happ and Nigel Hayes) and force Wisconsin to win with jump shots. They've shown some vulnerability with that at times. That being said, I'm really reaching to find a weakness on this team. They are a national contender.
Last week: 2

2. Maryland (20-3, 8-2). This is where it gets interesting. The Terps just lost to Purdue (at home), but I'm still keeping them at #2 and ahead of the Boilers for now. Despite the youth, Maryland has been one of the most consistent teams in the conference all season. They've won a lot of close games with good balance and ball movement down the stretch, which is a recipe for continued success. It'll be a tough finish to conference play and the youth will certainly be tested. I'll be interested to see where they finish up.
Last week: 1

3. Purdue (19-5, 8-3). Matt Painter has done a terrific job mixing up the lineup and bringing Isaac Haas off the bench. By the time Haas comes into the game, the opponent's starting center is either too tired to defend him or he's on the bench, leaving Haas matched up against a backup. Additionally, the guard play, particularly Carsen Edwards and Dakota Mathias, has been very good, which adds to the much-needed balance of the Purdue offense. To cap it all off, Caleb Swanigan is a legitimate contender for National Player of the Year.
Last week: 4

4. Northwestern (18-5, 7-3). Losing sophomore shooting guard Aaron Falzon for the season with a knee injury got everyone in Evanston worried….as if this was the type of year it was going to be. Even without Falzon, this team has been playing at an incredibly high level. The real challenge will come now, as Scottie Lindsey continues to be evaluated (illness) with a return date unknown. Good teams respond well to adversity, and that's exactly what Northwestern will have to do if it hopes to keep its NCAA tourney hopes alive.
Last week: 3

5. Michigan State (14-9, 6-4). If you monitor Michigan State's progress by the amount of times Tom Izzo has to pull aside one of his young freshmen, you'll notice that this team seems to be turning the corner a bit. The execution has been better, the effort defensively has been better and the product on the floor resembles the type of team we expected this Spartan bunch to be. They're still not nearly as good as they'll be by the end of the month. I'm still viewing this team as potentially one of the more dangerous NCAA tourney teams from the Big Ten.
Last week: 5

6. Indiana (15-9, 5-6). I'm not selling the Hoosiers yet, as I still think this is a team that can get hot at any moment. Not to mention, and as much as you try to avoid it, there's always a bit of a 'reset' when you lose a key player like OG Anunoby for the season. Having to play without James Blackmon Jr. for the past three games doesn't make life any easier, either. The upcoming rivalry game against Purdue is a chance for this group to show how they are going to compete to close out Big Ten play. Even with the injuries, the potential is there. The challenge now is to figure out who you're going to be without the stars on the floor.
Last week: 7

7. Iowa (14-10, 6-5). Losing your leading scorer for a game or two is never really a good thing–unless you have a team of young, hungry and talented individuals who need to take on a greater responsibility to take the next step in their development. The Hawkeyes are one of the most dynamic teams in the conference, and their youth took a big step forward and gained a lot of confidence winning two games without Peter Jok, the Big Ten's leading scorer. This may be my sleeper team to make some noise to close out conference play and spoil some fun for opponents in DC.
Last week: 8

8. Minnesota (16-7, 4-6). It's hard to believe that a team with a top-25 RPI and a top-15 SOS just avoided a six-game losing streak with a win at Illinois. Anyone I know who does bracketology for a living has Minnesota in the NCAA tournament field. If Reggie Lynch can stay on the floor and stay out of foul trouble, and if Amir Coffey can get back to attacking and scoring the way he was earlier this season, Minnesota can take advantage of a manageable remaining schedule and solidify its spot in the NCAA tournament.
Last week: 9

9. Michigan (14-9, 4-6). It appears as if this Michigan team is beginning to take a step in the right direction defensively. Defensive rotations and energy has been much improved over the past two to three weeks, but it hasn't always resulted in a win. That is what makes this conference so exciting and unpredictable. Winning games (at home or on the road) takes much more than simple talent and play-making ability. The Wolverines appear to be yet another team in the Big Ten with a ton of potential but just haven't played up to that potential.
Last week: 6

10. Ohio State (14-10, 4-7). The Buckeyes have reminded us how good they could be at times. The 0-4 start to conference play certainly put them in a tough position, and I still believe the personnel is much better than a team that sits where it is. The issue is, and continues to be, consistency and effort. When this team plays with urgency and effort, it is very tough to beat. At times, though, they seem to be disinterested. If JaQuan Lyle, Marc Loving and crew decide to turn it on, this team could make a nice late-season run and really make things interesting in the conference.
Last week: 12

11. Penn State (12-12, 4-7). The Nittany Lions can be a little Jekyl and Hyde, at times, but it is never for a lack of effort. This is a team that will always play hard. The issue for Penn State continues to be consistency and execution on the offensive end. Penn State has great size and high-level talent, but it has yet to discover how to make one another better. The effort with which they play will continue to keep them in games, but those close games will continue to go in the opposite direction until they're able to find comfort in executing down the stretch.
Last week: 11

12. Nebraska (10-13, 4-7). If not for the Huskers' tremendous win over Purdue, Tim Miles would be in the midst of an eight-game losing streak in conference play. The guard play of Tai Webster and Glynn Watson Jr. is as good as nearly any other team in the conference, but balance is paramount to continued success in Power 5 conference play. Jordy Tshimanga has taken a big step forward in his progress and production, but not having Ed Morrow and his presence and energy continues to hurt. Jack McVeigh could certainly play a much bigger role as a floor spacer and lengthy perimeter defender.
Last week: 10

13. Illinois (13-11, 3-8). The Illini are the team that everyone is trying to figure out. I felt this was a NCAA tournament team coming into the season, but it simply hasn't panned out. Malcolm Hill is still one of the best players in the conference, and his production hasn't fallen regardless of the team's struggles. I still see the Illini as the upset pick at the Big Ten Tournament. Not to win it all, of course, but to win a couple of games a spoil the hopes of Big Ten bubble teams.
Last week: 13

14. Rutgers (13-11, 2-9). The Scarlet Knights continue to improve from week to week. Every coach in the conference is aware of their progress, their personnel and their coaching staff, and no one is taking them lightly. The performance at Madison Square Garden against Big Ten-leader Wisconsin taught us a lot about Rutgers under Steve Pikiell, and it also taught the Rutgers players a lot about themselves. They executed a game plan and gave themselves a chance to beat a high-caliber team. The win at Penn State is a byproduct of their confidence, togetherness and their trust and belief in the process. Pikiell and staff have done a fantastic job in year one.
Last week: 14