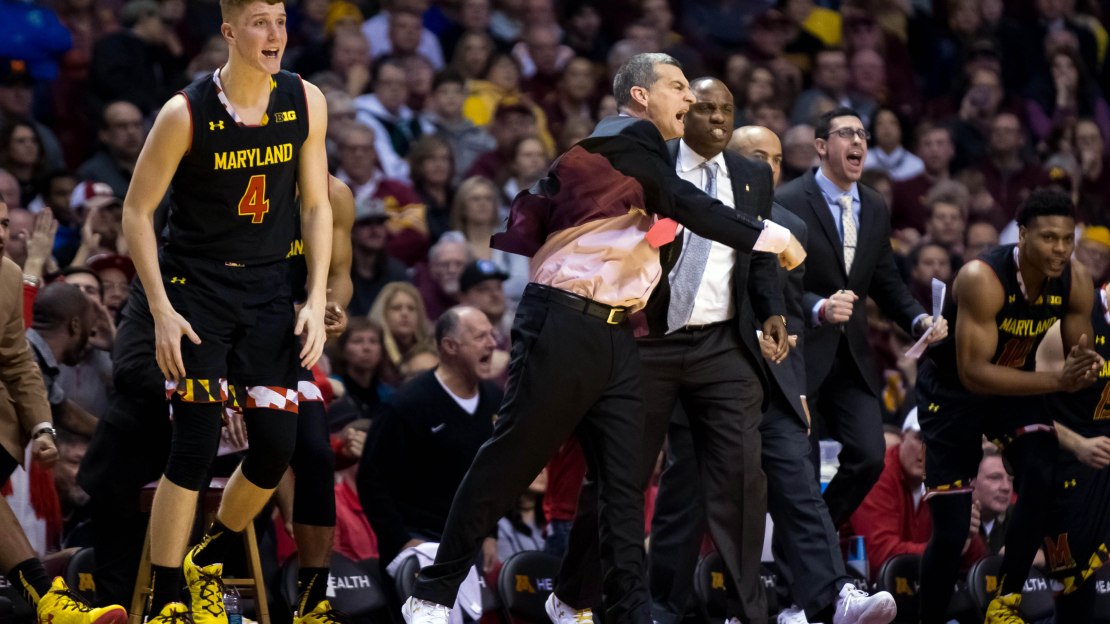 Every week, it's getting harder and harder to ignore what Mark Turgeon's young and talented Maryland team is doing.

What it's done is rattle off a 19-2 record, including a 7-1 clip in Big Ten play, to little fanfare. That's changing, at least here, as the Terrapins take over the top spot in my latest Big Ten Power Rankings, presented by ArcelorMittal.

1. Maryland (19-2, 7-1). It seems as if all Maryland does is win close games. There's a confidence that comes from pulling out tough road wins, and the Terps certainly have it. I've got them at No. 1 for now, but they've still got to face the three other ranked Big Ten teams (vs. Purdue; at Northwestern; at Wisconsin). I can't say enough how impressed I've been with the Maryland freshmen. Anthony Cowan, Kevin Huerter and Justin Jackson are simply playing at another level.
Last week: 2

2. Wisconsin (18-3, 7-1). The Badgers showed both vulnerability and resolve in their victory over Rutgers at Madison Square Garden this past weekend. I have had concerns with Wisconsin if it is forced to be a jump-shooting team, but it still found a way to win and that's what champions do. A stronger performance would have kept them in the top spot, where I think they'll eventually end up. Their starting lineup is as cohesive a bunch as any in the country, although bench depth will continue to be tested.
Last week: 1

3. Northwestern (18-4, 7-2). There's no denying it anymore: Not only is Northwestern a NCAA tournament team, it is a high-level team that is clearly getting the attention of the rest of the nation. Chris Collins has changed the game in Evanston and has done it without gimmicks or crafty schemes that are needed for less-talented personnel. This is a fun team to watch, and the environment at Welsh-Ryan Arena has been the best I've ever seen at Northwestern.
Last week: 4

4. Purdue (17-5, 6-3). The Boilermakers are in a search for defensive identity. All of the pieces are in place for them to make a strong run in the Big Ten and in the NCAA tournament, but they've got to figure out who they want to be on defense. Scoring on the offensive end is clearly not the issue, as this team has been good from the perimeter and inside. Their fate will lie in their ability to defend.
Last week: 3

5. Michigan State (13-9, 5-4). The Spartans have a chance to gain some momentum with Nebraska, Michigan (again), Iowa and Ohio State coming up. Tom Izzo has had to work even harder than usual with this group as injuries and a brutal schedule may have stunted their development. I still think this is an NCAA tournament team that would scare a lot of teams they'd face, regardless of their seed.
Last week: 6

6. Michigan (14-8, 4-5). The Wolverines have to continue to improve on the defensive end. It's not too often you see a team with a 4-5 record at the 6-spot in power rankings, but that's more a testament to the parity in the Big Ten. The potential is certainly there for John Beilein and crew, but it doesn't get any easier with three top-25 teams still on the schedule, as well as Michigan State, Indiana and Minnesota.
Last week: 8

7. Indiana (14-8, 4-5). Outside of some inconsistency with amazing wins and bad losses, injuries have (in a way) defined the Hoosiers season. Losing Collin Hartman before the season was a challenge to overcome and losing OG Anunoby for the year, Juwan Morgan for two games and James Blackmon Jr. for an indeterminate amount of time is a challenge I wouldn't want to face. Tom Crean has the right approach telling me it is now a fight to find confidence.
Last week: 5

8. Iowa (12-10, 4-5). The Hawkeyes may be one of the most exciting teams to watch in the conference. Beating Ohio State by double digits without Peter Jok was a statement by a young group of guys who Hawkeye fans should be excited about. The key will be (as it has been all season) consistency. If they can get consistent effort and communication on the defensive end, this young team can play with anyone in the conference. Getting Jok healthy will certainly help, too.
Last week: 10

9. Minnesota (15-7, 3-6). I always say you're not defined by your wins and losses in this conference. You're ultimately defined by how you bounce back and manage the lull you hit at any given point in the season. Losing five straight conference games poses a serious challenge for Richard Pitino and the Gophers. While they have individually experienced players, team chemistry can be an issue down the stretch as they do not have a great amount of time on the floor together.
Last week: 7

10. Nebraska (10-11, 4-5). The win over Purdue should move them up in many peoples' opinion, but I have a tough time doing so at the moment. I still view (the likes of) Minnesota, Iowa and Indiana as better teams with more potential. The Huskers have shown that they can compete in the conference but finding consistency in the W-L category will be a challenge. That said, there are some seriously winnable games left.
Last week: 11

11. Penn State (12-10, 4-5). The Nittany Lions have, at times, appeared to have turned things around on what was a rough start to the season. Credit Pat Chambers and his staff for keeping the talented freshman class engaged and eager to continue to improve. Beating Indiana and Rutgers would give them great confidence heading into a matchup with Maryland in State College. This is still a team no one wants to face and is steadily working toward becoming a team to beat in the Big Ten.
Last week: 9

12. Ohio State (13-9, 3-6). We know the potential is there, but the consistency is what has been missing. Trevor Thompson has taken a huge leap this year as his production and his skill-set have improved immensely. Playing through Thompson in the post should help provide better balance with Keita Bates-Diop out for the season. Inside-out play should help create easier opportunities for Marc Loving, JaQuan Lyle and Kam Williams around the perimeter.
Last week: 13

13. Illinois (13-9, 3-6). If you watch the Illini warm up, you'd see a NCAA tournament team with length, depth, athleticism and great size. The issue appears to be chemistry. We saw this with Maryland last season. Without chemistry on both ends of the floor, talent is neutralized. This team may be old and individually experienced, but its time on the floor together is limited and seems to be limiting their potential for success in conference play.
Last week: 12

14. Rutgers (12-10, 1-8). If you don't believe the Scarlet Knights are on the rise, you haven't seen them play enough. Steve Pikiell has done a terrific job with this group, and it really starts on the defensive end. He knows this will be a process but also likes the pieces he's got to work with and won't tolerate any lack of effort or dedication to the program. He's building a foundation for the future and will win some games along the way. They impressed a lot of people at MSG on Saturday.
Last week: 14